CAMPAIGNERS from Black Activists Rising Against Cuts (BARAC) demonstrated outside Jamaican High Commission on May Day calling for an immediate halt to forced deportation charter flights; one such flight to Jamaica is scheduled to leave this Friday. 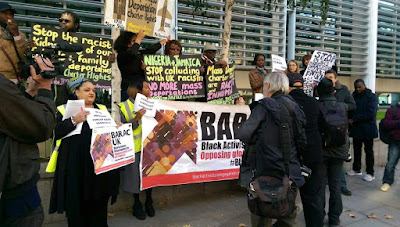 And people from the Windrush generation are still being booked on these flights in spite of Prime Minister Theresa May’s apologies last week over the horrendous injustices of treating people who have lived and worked many decades in Britain and who arrived here as British citizens when Jamaica was still a British colony.
Former Home Secretary Amber Rudd has resigned over the scandal of these elderly people who have worked and paid taxes in Britain all their lives but have had their right to citizenship taken away from the by changes in immigration law unless they can provide documentary proof for every years that they that they have lived here and a hefty fee for a special identification document.
They are not only threatened with sudden deportation from their families and settled lives but immigration laws passed by Theresa May when she was Home Secretary have forced employers, landlords and public services to become proxy immigration police be demanding documentary proof of immigration status from employees, tenants and service users. This mean those without the documentation have lost jobs, lost homes and been refused various services, including NHS care.
Zita Holbourne of BARAC said: “It’s astonishing that charter flights would be continuing at this time in the midst of the Windrush debacle.
“The Government has not set out a clear policy on who is covered from Commonwealth countries, so it makes no sense for this to be happening.
“Most people being deported in this way to Jamaica will be part of a Windrush family who, if not of Windrush generation themselves, will likely be the children or grandchildren of people who are.”
Ms Holbourne said a woman with British siblings, children and grandchildren was booked on the flight, served a removal notice and told she does not have enough family ties in Britain.
"She has subsequently been taken off the flight and released from Yarl’s Wood but there are likely to be more such examples.
“This injustice must be stopped and [everyone affected] properly compensated.”
A 63-year-old grandmother who has been held in Yarl’s Wood immigration removal centre for nine months is among those told she will be put on the plane alongside an unknown number of fellow deportees.
Yvonne Smith, who has been diagnosed with diabetes since her arrival at Yarl’s Wood, had lived in Birmingham while caring for her 92-year-old father.
He arrived in 1957 as one of thousands of Windrush migrants, but Ms Smith moved to Britain two decades ago after her grandmother died in Jamaica.
“I have no one there, I have nowhere to go, I would be on the streets,” she told the {Independent} from inside Yarl’s Wood, where detainees have recently been on hunger strike over their treatment.
“I have no family there, my dad is here, my siblings are here, my mum is dead. I have four grandchildren of my own, two sisters and four brothers, but the Government says I have ‘no ties’.”
Ms Smith said she had been caring for her 92-year-old father, who now faces being taken into NHS care against his wishes, and “just cries” every time she speaks to him on the phone.
On the day Theresa May issued a formal apology to Caribbean leaders the treatment of the Windrush migrants, Ms Smith was sent a letter from the Home Office announcing she “has no basis to remain in the United Kingdom”.
It said she was “to be removed on a specially chartered flight to Jamaica” code-named PVT070 at any time from 22 April, but the {Independent} has been told the Government will not be chartering a flight in May.
Another Jamaican woman, 58-year-old Yvonne Williams, was served with the same notice before being abruptly freed from Yarl’s Wood last Friday.
Diane Abbott, the Shadow Home Secretary, said the planned flight showed why the Windrush generation feel unable to trust the Government’s promises.
“So much for all the assurances and the apologies from the prime minister and the home secretary,” she added.
David Lammy, the Labour MP for Tottenham, called for a wider review of “hostile environment” immigration policies and for the rights of Windrush citizens to be guaranteed in law.
“Warm words from ministers are not enough. We need legislative guarantees,” he told the Independent. “I have long been of the view that the Home Office should cease the inhumane practice of deportation charter flights.”
Posted by london communists at 2:24 pm