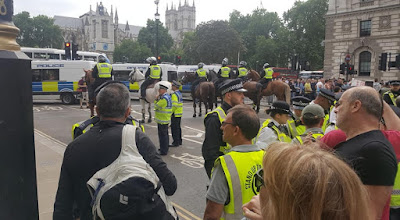 Police arrested five fascists in central London on Saturday after violence broke out during a protest against the jailing of former  English Defence League (EDL ) leader Stephen Yaxley-Lennon who calls himself 'Tommy Robinson’ in public. Robinson was jailed last month after he used social media to broadcast details of a trial that was subject to blanket reporting restrictions. Reporting restrictions are imposed on all court proceedings in Britain and are intended to avoid media reports that could influence the jury.
Thousands of racists and neo-nazis turned up for the rally and march that soon turned to violence when Chelsea and Millwall football gangs tried to attack Stand Up To Racism and Unite Against Fascism supporters mobilised to counter the fascist demonstration. They charged at officers in Whitehall before staging running battles with the police.
Bottles, sticks and cones were hurled at police officers and vehicles were attacked. At one point the police were outnumbered and forced to flee the scene in a hail of flying projectiles, pursued by the racist mob. Another bunch of fascists tried to force their way into Downing Street but were held at bay by the police.
At least two journalists were attacked by Robinson supporters. One was viciously kicked to the ground by a group of fascists. Police made a number of arrests including one person for possession of an offensive weapon and two for assault on a police officer.  The Metropolitan Police are now looking at CCTV footage of the Robinson demo.
One of those who spoke at the demonstration calling for the release of ‘Robinson’ was Dutch far-right leader, the Islamophobic Geert Wilders. Another was Filip Dewinter, a leading member of the Vlaams Belang party in Belgium. He is seen by many as an apologist for Belgium’s nazi collaborators during the Second World War.
Dewinter screamed “we are all Tommy Robinson” and claimed that the former EDL leader’s arrest was an attack on “everyone who is fighting mass immigration and Islamisation”. He claimed that the elite in Europe is already “submitting to Islam and imposing sharia law”.
They were joined by a number of notable far-right activists including the Holocaust denier Nicholas Kollerstrom and Luke Nash-Jones from Make Britain Great Again.
The fascist degenerates blocked off a major road near Trafalgar Square in central London, chanting "Free Tommy Robinson" and hurling smoke bombs at police. They also for a time manage to hijack an open-topped tourist sight-seeing bus, holding up Union Jacks and placards
"During the protest there were scenes of violence which saw bottles, metal barriers and other objects thrown at officers," police said. "Five officers have reported injuries, which are not serious."
Two arrests were for assaulting a police officer, one for possessing an offensive weapon, one for possession of a flare and the other for criminal damage to a bus.
Robinson was already subject to a suspended sentence for a contempt charge related to a separate case when he was arrested last month, and had been warned by a judge he would face prison if he committed further offences.
Appearing in court under his real name Stephen Yaxley-Lennon, he pleaded guilty and was given 10 months in jail for contempt of court, and another three months for breaching his previous sentence.

Posted by london communists at 10:32 pm