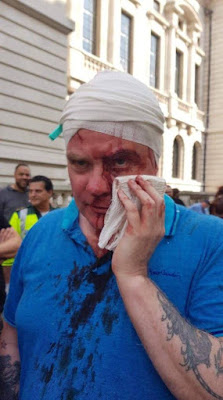 Fascist thugs launched a surprise attack on a group of railway workers outside a pub following a racist demonstration in central London last weekend. Although they were mob-handed the attackers got back twice what they gave, despite the advantage of surprise and numbers. But Steve Hedley, the deputy leader of the RMT transport union, suffered a head injury when he was glassed during the fighting.
This unprovoked attack by supporters of jailed English Defence League (EDL) leader Tommy Robinson and US president Donald Trump came at the end of a day of violence which, amongst other things, saw the blockading of a London bus by EDL supporters because the driver was a Muslim woman wearing a headscarf.
The EDL had called a ‘Free Tommy’ rally in support of their jailed leader Stephen Yaxley-Lennon, who calls himself Tommy Robinson. Robinson was sentenced last May to 13 months' imprisonment after pleading guilty to contempt of court. Their numbers were easily dwarfed by the size of the anti-Trump demo the previous day, which police put at 250,000 but was easily well over that number.
Labour leader Jeremy Corbyn was greeted with cheers as he spoke at the huge anti-Trump rally in Trafalgar Square. He told protesters to “build bridges, not walls” and said that they were showing their “love for democracy, diversity unity and hope” by being there.
“We’re asserting our right to demonstrate, our right to free speech, and our right to want a world that is not divided by misogyny, racism and hate,” Corbyn declared.
Steve Hedley had earlier addressed a counter-protest to the EDL rally in support of Trump and Robinson, and this is probably why he was singled out when the racist thugs went on their rampage. The railway workers were attacked because they are trade unionists, anti-fascists and left wingers, and because the RMT had played a prominent role in the counter-demo against the far right. It was an organised and targeted attack that happened in an area which was full of police.
Speaking on social media with blood still visible on his head, Hedley said: "We got attacked by a load of thugs, completely unprovoked,” adding that: “If you oppose Tommy you get attacked by a glass and a chair – we have to stop this.”
What this goes to prove is that the EDL is a fascist organisation with a classic fascist agenda. The EDL like to portray themselves as working-class English patriots and fighters for “English values” against the alleged or perceived “Islamisation of Britain”. But by attacking a leader of one of the country’s most militant trade unions they showed that they are opposed to working peoples’ organisations and the right of workers to organise themselves. The EDL are little more than a gang of degenerate football hooligans who are being directed by the shadowy fascist forces that always come to the fore whenever there’s an upsurge of militancy amongst the organised working class.
The police said that a total of 12 people were arrested: eight men on suspicion of assault at Storey's Gate in Westminster, two men on suspicion of public order offences, one man on suspicion of violent disorder and another man on suspicion of fireworks offences.
Steve Hedley’s partner, Bridget, who was held for 10 hours by the cops, was badly bruised in the fighting and was taken back to hospital with breathing difficulties on Monday.
As Hedley put it: “We in the RMT who were attacked by fascist thugs yesterday were not victims. We defended ourselves very well, beating off a larger group. We are not afraid and will be out next time in greater numbers to oppose them. No Pasaran!”
Posted by london communists at 10:48 am