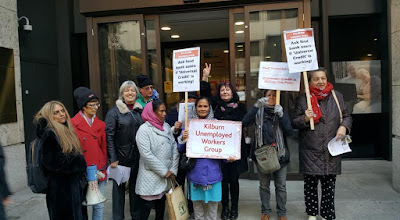 There was a big turnout from Kilburn Unemployed Workers Group picketing the DWP HQ at Caxton House in London’s West End last week. The protesters were calling for the scrapping of the hated ‘Universal Credit’ benefits scheme that is killing the poor and disabled.
Universal Credit is a punitive measure against a vast section of the population on low income rather than a rational simplification and streamlining of the benefit system, as the Tories claim. Universal Credit combines six working-age benefits into a single payment — but is paid monthly in arrears.
The roll out of Universal Credit (UC) threatens to ruin thousands of families throughout the country, forcing them into huge debt, homelessness and unemployment while a recent study led by the University of York found that benefits sanctions are pushing people into destitution, survival crime and ill health.
Posted by london communists at 1:54 pm