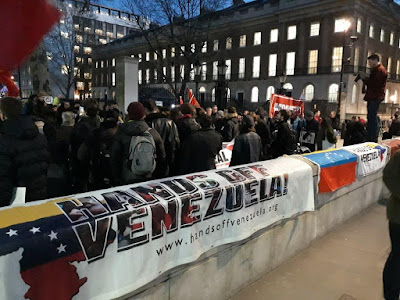 Around 100 people ,including many from London’s Venezuelan and Latin American communities, joined thousands around the world on Tuesday to protest against the openly imperialist US attempt at regime change in Venezuela. The protesters gathered opposite Downing Street denounced the British government’s support for the ultimatum, along with France, Germany and Spain, demanding that the country hold elections within eight days. Speakers called for solidarity with Venezuela and President Nicolas Maduro to be built up, and the protesters chanted “Hands Off Venezuela!”.
Posted by london communists at 1:23 pm