No to Trump and No to War! 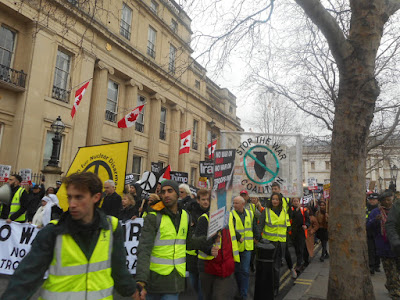 By New Worker correspondent
Londoners braved the cold weather on Saturday to attend Stop the War’s march against war on Iran. Although there were only a few hundred on the march from BBC headquarters to Trafalgar Square, plenty more came to hear Jeremy Corbyn, Tariq Ali and Steve Hedley speak at the rally at the end of the protest.

Jeremy Corbyn took the rostrum to the usual chorus of “ooh Jeremy Corbyn” from the crowd now several thousand strong. The retiring Labour leader referred to the tragic incident of the Ukrainian airliner downed in error by the Iranians, who mistook it for a hostile US aircraft.
This was a product of war, Corbyn said: “Today, let's recognise the horror that the families of those that died in the airliner travelling from Tehran to the Ukraine are suffering from now.”
The tragedy, which claimed the lives of all passengers and crew, was an “appalling act and part of a wide pattern of appalling acts all across the region”.
“There's no excuse for shooting down an airliner, there's no excuse for a targeted assassination by one state against another,” Corbyn said.
“Let’s be clear, there can be no excuses here. Let’s also recognise that that event and the events of the last few days and weeks have consequences.
“When big powers act illegally, when people step outside the norms of international law, there are consequences.
“All this does is set off a spiral of violence and danger which will lead us to yet more wars in the future.”
But probably the best speaker of all was Steve Hedley, a senior full-timer in the RMT transport union, who called Trump a draft dodger and said that if the likes of Trump had to actually fight in a war then there would not be any war. He then finished with the rousing call of “No war but the class war!”.

Posted by london communists at 5:34 am