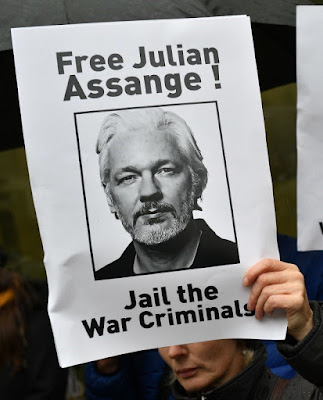 Over a hundred doctors and two Australian MPs are calling for the release of Julian Assange, who is being held in London’s Belmarsh prison while awaiting hearings that could lead to his extradition to the United States where he faces life imprisonment on bogus espionage charges.
The WikiLeaks founder, an Australian citizen living in Sweden, came to Britain in 2010 following rape allegations that he strenuously denied. Assange was avoiding an arrest that he feared would lead to his deportation to the USA, where he faces charges following WikiLeaks exposure of US war crimes in Iraq. In 2012 the then progressive government of Ecuador offered him asylum and Assange took refuge in their embassy in London when the British government moved to send him to America. But Assange was denied free passage to leave the country.
Seven years later reactionary forces in the pay of US imperialism seized power in Ecuador. Assange was handed over to the police in exchange for around $4.2 billion worth of IMF loans and aid.
In May 2019 UN torture expert Nils Melzer, along with two other medical experts who specialise in assessing torture victims, concluded that the WikiLeaks founder exhibited symptoms of "psychological torture".
Last November over 60 doctors wrote to the Home Secretary to express their serious concerns about the physical and mental health of Julian Assange. They requested that Assange be transferred from Belmarsh prison to a university teaching hospital for medical assessment and treatment. Faced with evidence of untreated and ongoing torture, they also questioned Assange's fitness to participate in US extradition proceedings.
Having received no substantive response from the Johnson government 117 physicians and psychologists from all round the world including the original protesters, have written to the Lancet, Britain’s leading medical journal, demanding an “end to the psychological torture” of Julian Assange.
“Since doctors first began assessing Mr. Assange in the Ecuadorian Embassy in 2015, expert medical opinion and doctors’ urgent recommendations have been consistently ignored,” the letter, organised by a group of medical professionals known as Doctors for Assange and published on 17th  February, says.
The medical experts “condemn the torture of Assange” and the continued denial “of his fundamental right” to appropriate healthcare.
“This politicisation of foundational medical principles is of grave concern to us, as it carries implications beyond the case of Julian Assange. Abuse by politically motivated medical neglect sets a dangerous precedent, ultimately undermining our profession’s impartiality, commitment to health for all, and obligation to do no harm”, the letter reads.
Meanwhile two visiting Australian MPs have also condemned the imprisonment of the prominent Australian journalist. They told a press conference in London that the continued detention and prosecution of Wikileaks founder Julian Assange was an “affront” to democracy, as well as freedom of the press and speech.
Australian independent MP Andrew Wilkie and the National Party’s George Christensen landed in London on Sunday to speak at a Foreign Press Association meeting on a platform with Wikileaks editor-in-chief Kristinn Hrafnsson and Jennifer Robinson, lawyer for Assange’s legal team.
Andrew Wilkie, a former Australian army intelligence analyst who resigned over Australia’s role in the invasion of Iraq in 2003, said that there was a “broad range of views” amongst officials about the detained journalist.
Numerous “allegations, innuendos, stories and disinformation”, had been spread over many years by the media and various officials, he added.
WikiLeaks disclosed information about the wars in Iraq and Afghanistan, as well as the conditions in the American Guantanamo Bay prison camp Wilkie said.
Wikileaks was simply “releasing information about those matters in the public interest …as a journalist”, the Independent Australian MP told the press, adding that his detention at Belmarsh prison and potential extradition to the US revealed the “sharp contrast what the injustice is”.
The other Australian MP, George Christensen from the conservative National Party, discussed a myth that “need to be busted” regarding Assange, namely that the publisher was “not a journalist”.
Christensen said: "I think he is. Australians think he is. He’s won an award. But it doesn’t really matter whether he’s a blogger, a journalist, or a publisher. The issue is free speech and the right to publish".
Posted by london communists at 1:15 pm