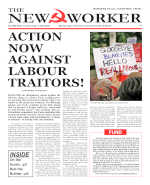 It hasn't taken long for Sir Keir Starmer to reveal his real agenda for Labour now. He talks about “unity” but what he means is closing ranks behind the neo-liberal ‘New Labour’ agenda and unity around the Blairite has-beens in parliament that backed his cause. His first act has been to call for a Brexit delay. His first response to the coronavirus crisis has been simply to call on the Government to produce a lock-down exit strategy and his reaction to the damning Labour internal report on the treacherous role of the Blairites in undermining the Corbyn leadership was to call for a probe into who leaked it.
Some within the Starmer camp dream of high office in a ‘government of national unity’ whilst the usual fake lefters bleat on about the need for a new ‘Marxist’ party to challenge Labour in the polls. None of them can explain why all previous attempts to do so have failed dismally.
The New Communist Party has never confused the Labour Party with a revolutionary party nor imagined that we can gain a workers’ state through parliamentary elections. But a Labour government, with the yet unbroken links with the trade unions, offers the best option for the working class in the era of bourgeois parliamentary democracy. Our strategy is for working class unity, and our campaigns are focused on defeating the right-wing within the movement and strengthening the left and progressive forces within the Labour Party and the unions. We support those in the Labour Party fighting for left policies, which is part of the struggle for a democratic Labour Party.
Posted by london communists at 10:02 am