No support for Kiev fascists 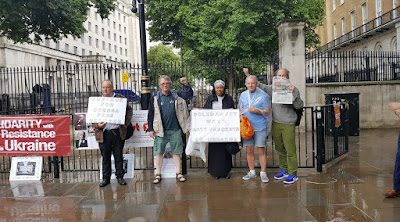 
Comrades returned to Whitehall last week for another picket in solidarity with Ukraine’s anti-fascist fighters and to call for the end of British military assistance to the puppet regime in Kiev. Gerry Downing of Socialist Fight and Dermot Hudson from the London NCP joined other supporters of the Solidarity with the Anti-Fascist Resistance in Ukraine (SARU) movement to highlight the repression that is going on in Ukraine today.
The British government, along with American and Franco-German imperialism, actively supported the 2014 ‘Euromaidan’ coup and it has sent military instructors to train the Ukrainian that now incorporates 80 far-Right and fascist militias.
In May 2014 a fascist mob surrounded the Odessa Trade Union House and started a fire in which at least 48 people died. The Kiev regime says 48 people were killed when neo-Nazi thugs besieged pro-democracy protesters inside the building before torching it, blocking the exits so that they couldn’t escape. But eyewitnesses say the true number could be well over 100. Since then union offices have been ransacked and torched, communists, socialists, Jewish and gays attacked and murdered, Second World War Holocaust memorials desecrated, and judges and lawyers intimidated and threatened.
Britain, the US and the European Union, and their pet ‘human rights’ groups, have been silent on these outrages, whilst Ukraine’s Second World War fascist leaders, who collaborated with Nazi Germany in the genocide of 5–7 million people including 1.5 million Jews, and the deportation of two million people to Germany, are now officially celebrated as national heroes.
Posted by london communists at 10:55 am