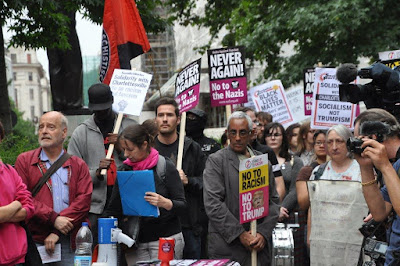 
ANTI-Fascists gathered outside the United States embassy in Grosvenor Square in London on Monday to show solidarity with the anti-fascists in Charlottesville, Virginia, after an American neo-Nazi drove a car into a group of protesting anti-fascists, killing one, Heather Heyer, and injuring 19 others.
The event was organised by United Against Fascism (UAF) and Black Lives Matter (BLM).
The incident was made all the more more appalling by the subsequent remarks from President Donald Trump, who condemned the violence from “both sides” and held the anti-fascists equally to blame with the violent, swastika toting, torch wielding neo-Nazis.
The neo-Nazis, who included former Ku Klux Klan (KKK) leader David Duke, praised Trump for his support for their cause. The praise for the Republican leader drew concern and condemnation from across the political spectrum, including from senior figures within his own party.
Trump's presidential campaign last year enjoyed broad far-right backing, and the Trump administration includes several figures linked to far-right and neo-Nazi groups.
Trump was later pressured into making a stronger condemnation of the neo-Nazis but back-tracked by voicing sympathy for their cause. They had been protesting at the removal of a statue of Robert E Lee – a leading general in the pro-slavery Confederate army in the United States civil war.
By Wednesday Trump again criticised "both sides" including anti-fascist protesters, whom he described as the "alt-left", a term popularised by the far-right.
Many of those gathered in Grosvenor Square on Friday evening were Americans living in London, declaring that Trump was making them “ashamed to be American”.
Posted by london communists at 8:47 pm