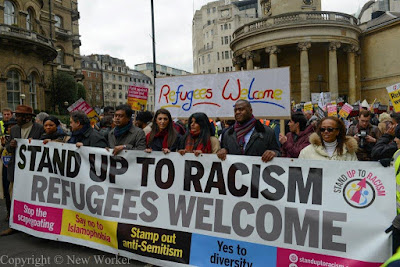 AROUND 1,300 anti-racists packed Friends Meeting House in Euston, London, last Saturday to debate the rising rise of racism and Islamophobia in Britain and the world, at a conference called by Stand Up To Racism (SUTR).
Amongst those attending were leading anti-fascists from Germany, Austria and Greece and author David Neiwert analysing the new far-right mobilisations in the US emboldened by US President Donald Trump’s Islamophobia and racism, Kevin Courtney, Roger McKenzie, Harun Rashid Khan, Shahrar Ali, Salma Yaqoob, Weyman Bennett, the joint general secretary of Unite Against Fascism.
Other participants included Catherine West MP, Claude Moraes MEP, David Rosenberg (Jewish Socialist Group), Talha Ahmad (Muslim Council of Britain), Kate Hudson (CND), and Shadow Home Secretary Diane Abbott.
The conference heard first-hand accounts of the horrific, avoidable disaster at Grenfell and its aftermath, people those whose family members died in police custody, those who have born the brunt of the rise in Islamophobic hate crime, and European Union nationals whose rights are being threatened by the British government.
There were reports on the struggle against fascism in Germany, Austria and Greece – but not Ukraine. Plenty of discussion on the dangers of fascism threatening countries but nothing about the country that now has an aggressive, openly pro-Nazi government, and which is now being supported financially and militarily by Britain and the USA.
This weakened SUTR’s claim to be trying to “bring all these struggles together and fight as one” to become “more effective than we could possibly imagine.”
Diane Abbott told the closing plenary that a future Labour government would fight racism: “We cannot allow the politics of hate to prevail. You can't take progress for granted and there are some who want to push the progress back.
“Fighting racism will be at the heart of my work as Home Secretary when Jeremy Corbyn is Prime Minister. The left in Britain has grown in confidence but the threat of the right and racism has not gone away.”
As Weyman Bennett told the conference: “We need a movement that can give us strength. We need to build local Stand Up To Racism groups.
“When the right is on the march across the world, we need to stand up and we do that by organising.”
Posted by london communists at 12:08 pm