No Nuclear War over Korea! 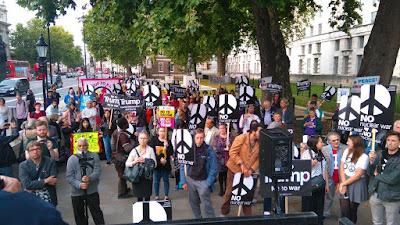 London comrades joined anti-war campaigners in Whitehall calling for peace on the Korean peninsula last week. Around 200 protesters gathered opposite Downing Street to hear speakers from the Stop the War Coalition and other peace campaigners call for negotiations to end the tension over the nuclear issue in Korea that could easily trigger a nuclear war.
CND and Stop the War movement activists called on the British Government to reject a military solution to the conflict and urgently use its influence to press for all involved to avoid and refrain from further provocative rhetoric or military exercises and tests.
Posted by london communists at 9:56 pm