The voice of Borotba in London 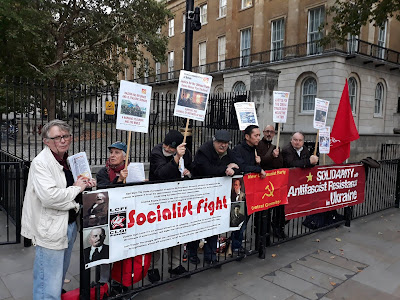 
Ukrainian anti-fascists sent a message of support to London demonstrators in Whitehall last week protesting at continuing British support for the fascist regime in Kiev. The early evening protest, opposite the prime minister’s resistance in Downing Street, was organised by the New Communist Party of Britain (NCP), Socialist Fight, Posadists in Britain and members of Solidarity with the Anti-Fascist Resistance in Ukraine. NCP leader Andy Brooks and Gerry Downing from the Socialist Fight movement joined other picketers in a protest that attracted considerable interest on the busy street.
A message from Alexey Albu on behalf of Borotba (Struggle), the underground Marxist resistance in Ukraine, was read out and copies given out on the street. Albu, who now lives in exile in Russia, said:

For more than four years war has raged in our country and has claimed thousands of lives.


Ultimately, neo-liberals came to power in Ukraine as a result of a coup d’état at the hands of extreme right-wing paramilitary groups.


The first laws of the new government were aimed at discriminating against the Russian-speaking population of Ukraine, imposing a cult of the Nazi collaborators of the Second World War, and selling off the remains of state property.


Ukraine was plunged into the abyss of chaos, poverty and devastation. The new government’s economic course caused the national currency to fall in value by more than 300 per cent, a fall in trade turnover, the closure of enterprises and, as a result, a financial crisis for state institutions.


There has been a steep rise in the number of weapons in Ukraine at the hands of the far-right nationalist groups. As a result, crime has increased 8–10 times in recent years.


The far-right nationalists are allowed to rob and murder people with impunity. Today they get away with anything as they are the backbone of the ruling regime.


After the coup in February 2014 many Ukrainians began to resist the illegitimate liberal-nationalist government with weapons in their hands, forming militia units.


After the terror inflicted by the new Kiev authorities in Odessa on 2nd May, 2014, when neo-Nazi militants killed dozens of civilians, it became clear to Ukrainian society that there was no possibility of reaching any agreement with the new government peacefully.


Mass resistance began in the southern and eastern regions. A civil war began. In this war, the new Ukrainian government used the army against civilians of its own country. It used heavy artillery to destroy whole villages.


Comrades! All this would not be possible if the new Ukrainian government did not receive financial assistance from members of the European Union and other international institutions, in which the UK plays a key role.


From our TV screens we are told that the help is being given to peaceful projects but this is not true. The Ukrainian military machine cannot live without foreign financial support.


When your government sends the next tranche of aid to Ukraine – you know that this money is taken from you, taken from your pockets, and given to those who kill our brothers and sisters who do not agree with the new national-liberal course of the Ukrainian government.


Comrades! We remember well from history that during the allied intervention in the Russian Civil War, when the Entente troops landed in Soviet Russia, the workers of England and other countries did everything to disrupt military supplies, and made an invaluable contribution to the liberation of Russia and the establishment of the young workers’ state.


We remember how our great-grandfathers, together with yours, fought together in the allied coalition against fascism – and won!


Posted by london communists at 6:48 pm