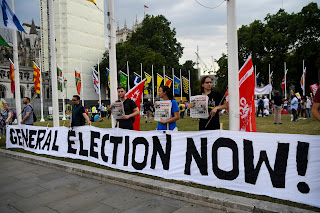 People gathered in Parliament Square in London last week, showing placards as they attended a Labour Party rally calling for a general election. Jeremy Corbyn has called for a general election because, he claimed, new Prime Minister Boris Johnson has “no plan” to tackle Britain’s problems. The Labour leader said that the new Conservative Government has “the hardest right-wing Cabinet I have ever seen”.

Posted by london communists at 12:07 pm