No more support for Kiev fascists! 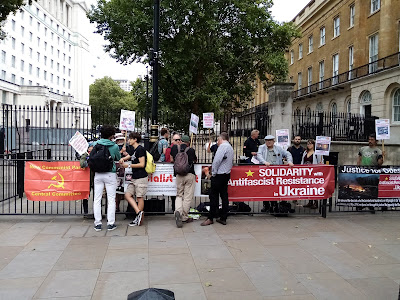 London communists, along with many other anti-fascists, called for solidarity with the people of the Lugansk and Donetsk people’s republics in the heart of the capital on Saturday.
Twenty or more demonstrators including NCP leader Andy Brooks joined the picket opposite Downing Street called by the New Communist Party (NCP), Socialist Fight and the British Posadist movement, and supported by the Solidarity with the Anti-Fascist Resistance in Ukraine (SARU) campaign.
Protestors gathered opposite Downing Street in Whitehall to call for the British government to end all support for the Kiev regime and to back a peaceful negotiated end to the war in Ukraine. A Russian journalist from TASS covered the picket and interviewed Theo Russell, the NCP London Organiser. Further support came from Greek communists, progressive Italian students and members of many trade unions, who joined the protest and gave out leaflets on this busy thoroughfare between Trafalgar Square and Westminster. Many agreed with the sentiments and some even joined us to stand in solidarity with our demands.
The demonstrators pointed out that since the February 2014 coup there has been no democracy in Ukraine, pointing to the armed Nazi thugs on Ukraine’s streets, in the army, the police and the security service, the joint far-right militia patrols with the police, the banning of political parties, the attacks on courts, threats and intimidation of judges, and the closing down of opposition newspapers, TV and radio stations.
In July the remains of 28 soldiers of the 14th Waffen SS Division, made up of Ukrainians who fought alongside the Nazi German forces in the Second World War and assisted in the murder and deportation of millions of Jews, communists and others, were reburied near Lviv with full military honours.
Dozens of openly fascist militias have been incorporated into Ukraine’s American-trained and equipped National Guard, notably the powerful Azov Battalion, whose symbol is based on that of the Ukrainian SS Nachtigal Battalion, the ‘Wolfsangel’, that committed many atrocities during the Nazi occupation during the Second World War.
In February 2014 a fascist-backed coup took place in Ukraine. Two months later neo-Nazi thugs besieged pro-democracy protesters inside the Trade Union House in Odessa before torching it, blocking the exits to trap the victims in the blaze. The Kiev regime says 50 were killed but eyewitnesses believe the true number is well over 100. Not one of the thugs responsible for the murders has been charged because they are followers of the neo-Nazi militias that prop up the corrupt regime that does the bidding of Anglo-American and Franco-German imperialism.
Soon afterwards the people in eastern Ukraine took up the gun to defend themselves from the fascist onslaught and set up their own people’s republics in the Donbas. Thousands of Donbas civilians have been killed by the fascists and the Ukrainian army in the struggle to defend their new-born freedom.
Since the beginning of 9th July, defenders and 10 civilians have died in the Donetsk and Lugansk republics, and many more have been injured, in attacks by Ukraine’s army and the US-trained National Guard made up of fascist battalions. This year 116 civilians have died in the Donetsk People’s Republic in attacks by Kiev’s forces.
The protesters do not believe that the removal of Viktor Yanukovych in February 2014 was legitimate. Foreign secretary William Hague told parliament that his removal was “made by the Rada, the Ukrainian Parliament, by the very large majorities required under the constitution”.
In fact the vote in the Rada did not meet the two-thirds majority required under Ukraine’s constitution, and the requirements for a special commission of the Rada and a review by the Constitutional Court were not met. In effect, the change of power was a coup backed by violent protests.

Posted by london communists at 5:11 pm