BARAC protest links racism in US and Britain 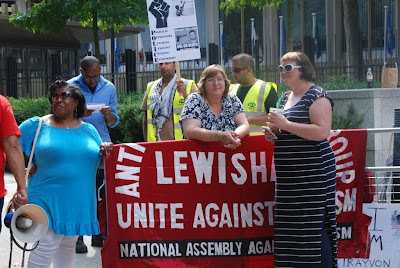 BLACK activists, anti-racists, trade unionists and other progressives gathered at 2pm outside the United States embassy in Grosvenor Square in London last Saturday for the start of a protest against global racism and injustice.
The protest was organised by Black Activists Rising Against Cuts (BARAC) and supported by Operation Black Vote, the National Black Students Campaign and a number of unions, pressure groups and anti-racist organisations.
Outside the US embassy the protesters expressed their solidarity with the families of Trayvon Martin, Stephen Lawrence, Azelle Rodney, Jimmy Mubenga and many others to highlight the reality of racism and seeking justice, both here in Britain and the US.
Speakers at the assembly point called for the and for the “Stand YourGround” laws to go. Zita Holbourne, co-chair of BARAC UK said: “We support the call from USA activists for a complete Florida boycott until the laws are revoked and applaud artists such as Stevie Wonder for refusing to perform in Florida.
“It’s a disgrace that families who lose their loved ones through racism must then spend a life time pursuing justice. No justice, no peace!”
At 3pm the protesters marched to Downing Street for a second rally and round of speeches, supporting the demands of the family of murdered black teenager Stephen Lawrence for a full public inquiry into allegations of police spying on the bereaved family and anti-racists in the 1990s in order to discredit them, while failing to investigate the racist murder of Stephen Lawrence.
Lee Jasper, co-chair of BARAC UK said: “We march today in solidarity with the family of Trayvon Martin and to highlight the reality of rising rates of racism in Britain.
“The US authorities should abolish the hated 'stand your ground' law in Florida that is a license to kill. We march to support the call from the Lawrence family for a full and independent judicial led public inquiry into the allegations that the Metropolitan Police sought to smear both the family and supporters through a covert police surveillance unit.
“We march for Jimmy Mubenga, Mark Duggan, Kingsley Burrell, Smiley Culture and Azelle Rodney. We march for justice and equality in the 50th anniversary year of Dr Martin Luther King’s 1968 March on Washington.
“The truth is that his dream is a threadbare vision here in the UK where racism is on the rise amplified by austerity.”

Posted by london communists at 10:39 am