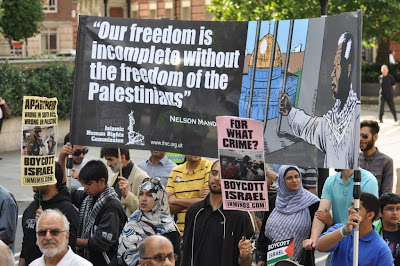 HUNDREDS of protesters gathered in Portland Place last Friday to mark Al-Quds Day in London to support Palestinian resistance against Zionist oppression.
The theme of this year’s Al-Quds march was the liberation of Palestine. Many organisations, including Stop the War Coalition, the Muslim Council of Britain, Friends of Lebanon, Innovative Minds, Jews for Boycotting Israeli Goods and IHRC, supported Al-Quds Day 2013 the rally and march the American embassy in Grosvenor Square.
In August 1979, the late founder of the Islamic Republic Ayatollah Khomeini declared the last Friday of the Muslim holy month of Ramadan as International Quds Day, calling on Muslims across the world to mark the annual occasion by holding street rallies.
Millions of people around the world take to the streets on this day in a show of support for the people of Palestine, demanding an end to the Israeli occupation of Palestinian lands.
Posted by london communists at 6:06 pm