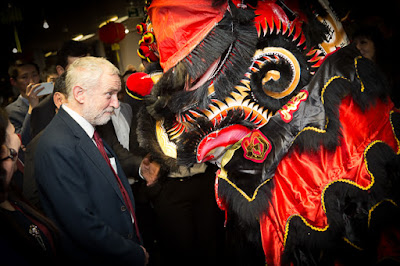 Labour MPs, Chinese diplomats and nearly 200 members of London’s Chinese community braved snow and ice last week to celebrate the Chinese New Year at the annual Chinese for Labour banquet at the Phoenix Palace in London.
Guests of honour included Labour leader Jeremy Corbyn along with a number of other MPS and Labour peers, as well as Ambassador Liu Xiaoming and other senior diplomats from China’s London embassy.
Chinese for Labour Chair Sonny Leong welcomed guests, saying: “There is more to do in fully engaging the Chinese community, to bring them to Labour and empower them to make their greatest possible contribution to British society. And so we have developed our first ever Chinese for Labour manifesto, which sets out an agenda that we hope the Labour Party will adopt to engage with and serve the British Chinese and broader East Asian community.”
Jeremy Corbyn said: “Chinese people have contributed hugely to British life. With 7,000 Chinese-owned businesses in the UK, almost every corner of our country will have a Chinese-run business contributing to their local economy. From our creative industries to our public services, Chinese people make an invaluable and often overlooked difference to our country. So thank you for all your contributions.”
The Chinese ambassador highlighted Labour’s past contributions to Sino-British relations.
“Britain became the first major western country to recognise the People's Republic of China,” Liu Xiaoming declared. “Hong Kong's return to China was another highlight and it was followed by accelerated progress in China–UK relations.
“The China–UK comprehensive strategic partnership was established while Labour was in government. And the UK under Labour joined China in launching several high-level exchange mechanisms, including the annual Prime Ministers' meeting, the Economic and Financial Dialogue, and the Strategic Dialogue.
“Eighteen years ago, Chinese for Labour was founded. Since then, you have made great efforts to raise the sense of citizenship among the Chinese community. You have launched campaigns like the British Chinese Project to encourage them to get actively involved in politics.
“I look forward to continued contribution from the Labour Party and Chinese for Labour. I am sure your efforts will help improve understanding between the people of our two countries…In the new year, we look forward to strengthening the communications between political parties of our two countries. The China–UK Leadership Forum is a platform for such communications. We hope the Labour Party will continue to take an active part in this Forum.
“We hope to join hands with the Labour Party to advance China–UK relations, to deliver more benefits to the people of our two countries, and to contribute to world peace and development and promote the sound development of our bilateral relations.”
The Chinese for Labour Group is an affiliate of the Labour Party. It was formed in 1999 to promote the interests of Chinese people in the Labour Party and to improve the quality of life of the Chinese community in Britain.
Posted by london communists at 9:07 pm