Peace Now! US troops out of Korea! 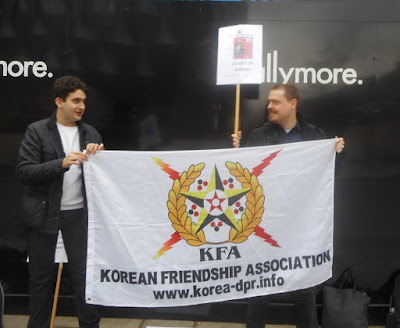 Korean solidarity activists stood outside the new and heavily guarded American embassy in London last weekend calling for peace on the Korean peninsula and the withdrawal of all US troops from south Korea. Called by the Korean Friendship Association  (KFA), the picket was supported by New Communist Party members in London, including Theo Russell from the Central Committee, together with comrades from the Italian Communist Party and supporters of the British Posadist movement.
KFA Chair Dermot Hudson took the mike to call for the scrapping of the provocative military exercises that US imperialism intends to hold in south Korea next month, which, he said, were “an unwarranted challenge to the developing peace process on the Korean peninsula.”
This was the first KFA picket outside the new US embassy in Vauxhall. It certainly won’t be the last!
Posted by london communists at 5:59 pm