On Friday 2nd March I boarded the 17:39 train from Waterloo East to Orpington to get home. The train was operated by the South Eastern Railway, a privatised rail company owned by the Go Ahead Group, a capitalist monopoly.
The train actually arrived at 17:41. Not too bad I thought to myself, only two minutes late. Commuting on South Eastern Trains is a negative experience because they are continually late. “Signalling difficulties“, “broken down train“, “engineering works“, “weather”, you name it, there is always an excuse for the fact that they cannot do the basic thing and run the trains on time or nearly on time. I did not know what was in store for me!
It had been snowing that afternoon and there was still a bit of snow coming. There had been snow on and off for the past two or three days. It had not been the dire reports of 20cm of snow but just a few centimetres of snow, which should not have posed any problem. The DPRK and socialist countries never have these problems with snow. 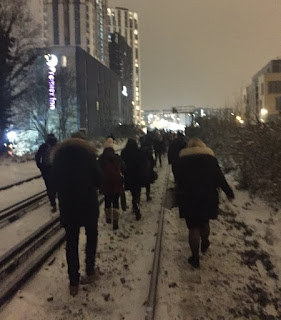 The train pulled out of Waterloo East. It was crowded because there was no Sidcup train and they had told passengers for Sidcup to join the train and change at Lewisham. The train trundled into London Bridge and left London Bridge, however it got slower and slower. Eventually it came to a halt about half a mile or so from New Cross. This was at about 17:53. The train just sat there. After about 15 minutes or maybe longer the driver spoke to the passengers over the PA system. He basically said he did not know what was what and was “speaking to two signal boxes“ to find out. About another 15 or 20 minutes later the driver informed us that a train in front had stuck on a gradient on the approach to Lewisham. Later the driver said it was because it was a 12 car train. This announcement was met with derision by some passengers.
Time dragged on. We had been on the train over an hour. The driver appealed for a paramedic because someone in one of the carriages had suffered a fit (not surprising being stuck on a train). Meanwhile the heating and air conditioning went off because of no power, there were emergency lights only. Worse still, the only toilet on the train became blocked.

Meanwhile more excuses offered were offered and a great deal of conflicting information. At one point we were told that the train would be reversed back into London Bridge. It was learned that people on the first train had been evacuated and those on the second train had opened the doors and jumped off. Some people decided to take matters in their own hands and pressed the emergency door release and jumped out. This did not look a good choice however: firstly, on jumping out one risked landing on the third rail (600 volts at least); secondly, trying to walk along icy tracks in the darkness; thirdly, one would have to scramble down a snow covered bank in darkness. I also realised that I would need to walk to a bus route to get home. So myself and a number of other passengers stayed put.

The train eventually moved at 22:35, nearly five hours after it had left Waterloo East. What a disgrace! The privatised rail companies have a real ‘do not care’ attitude towards passengers. It is not simply a case of people having their evenings and weekends messed up by this kind of nonsense, but there are cases of people who have lost jobs due to train delays (which seem to be permanent and perennial on South Eastern Trains rather than the odd occurrence). In the days of British Rail (BR) generally problems like this incident did not occur because BR had their own shunting engines and locos that could move broken-down or stuck trains, but the toy-town privatised railways do not have their own locos only electric units. The BBC, taking the side of South Eastern Trains, blamed the incident on passengers escaping the train – but it was down to pure and simple incompetence by South Eastern Trains, who could not could not run a bath let alone a railway!
Bring back British Rail!
Nationalise the railways without compensation!
Posted by london communists at 1:26 pm