A lesson from history 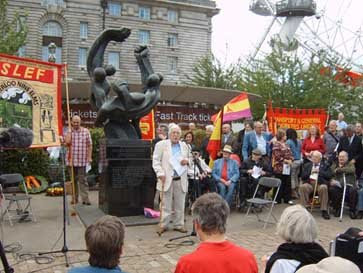 SAM RUSSELL, veteran of the war against fascism in Spain, led a crowd of around 300 at the International Brigade memorial in Jubilee Gardens on the South Bank of the Thames last Saturday in the annual memorial event for those who went from Britain, ready to sacrifice everything, to stop fascism in Spain in the 1930s.
Other speakers and dignitaries included Paul Preston of the London School of Economics, Tony Lloyd, who chairs the Parliamentary Labour Party, the Spanish Ambassador and International Brigade Association secretary Marlene Sideaway – who delivered La Passionaria’s Standing Down speech from 1938.
Paul Preston told the crowd that the war in Spain was “the first part of the Second World War” and that “if people had listened to the International Brigaders the Second World War might never have happened”.
Posted by london communists at 3:35 pm No comments:

NEW TORY London mayor Boris Johnson has proposed cutting the Greater London Authority’s (GLA) budget by 15 per cent next year.
He has said delivering value for money and preventing youth crime were his priorities as he set out the guidelines for his first budget.
Both the Metropolitan Police Authority (MPA) and the London Fire and Emergency Planning Authority (LFEPA) could see increases in their budget for 2009-10.
The mayor will issue a draft budget for consultation in December. He will then present the draft budget proposals to the London Assembly in January.
Johnson said improving the quality of life for all Londoners was another priority and he has also made it clear new policies must meet his commitment to reduce carbon dioxide by 60 per cent by 2025.
His proposals will see no changes to the budgets of the mayor’s business wing, the London Development Agency (LDA) and Transport for London (TfL).
So far the sums do not add up but he has not specified where the cuts will fall to meet the 15 per cent budget cut.
Posted by london communists at 3:33 pm No comments:

A frolic at the Barbican 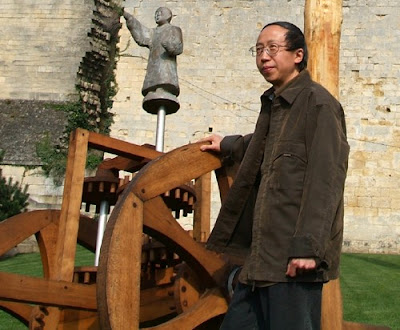 IN THE 19th century British imperialism used its might to force feudal China to import opium from the India to offset the cost of imports of Chinese silk, tea and porcelain. China’s defeat also led to other humiliating concessions to Britain including the surrender of Hong Kong. This shameful episode is largely forgotten in Britain but not in China and it’s the theme of a vast piece of concept art now showing at the Barbican Centre in London.
Huang Yong Ping is an avant-garde artist who has lived in Paris for over 20 years but his heart in still in China and this new “installation” seeks to convey the meaning of this Victorian drug trade through a series of sculptures that propels the viewer into a 3D abstract painting. It starts with giant pipe cleaners and bowls that lead on to a toppled statue of Lord Palmerston, the architect of the Opium Wars, on an opium bed smoking from a colossal pipe. At the back Huang has recreated an East India Company warehouse packed with crates of drugs and shelves stacked with piles of opium balls.
“I consider the opium trade as a forerunner for today’s globalization: melting trade and the expansion of power. Sublimating the mind, while the body declines. Unveiling the violence and hiding the frolic,” Huang says about this controversial work he’s called Frolic after one of the American clippers custom-built to transport opium to China.
Huang Yong Ping was born in the port of Xiamen in 1954 and he was one of the founding figures of Xiamen Dada, one of China’s most radical avant-garde collectives in the 1980s. Though he is well-known on the international art scene this is his first solo exhibition in Britain which is part of China Now, the largest ever festival of Chinese culture in Britain.
Admission’s free at the Barbican’s Curve Gallery, Silk Street London EC2 from 11.00 am to 8.00 pm until 21st September.
photo: Huang Yong Ping with one of his works
Posted by london communists at 11:42 am No comments: 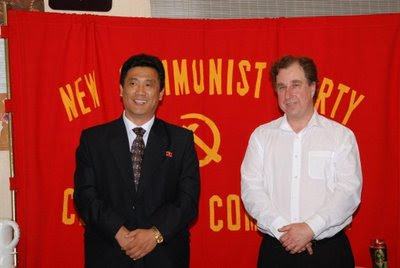 In July the NCP celebrates the foundation of the Party on 15th July 1977 and this year was no exception. Friends and comrades from home and abroad gathered at the Party Centre in London last weekend to meet and greet comrades that included Jang Song Chol from the DPR Korea embassy in London, Explo Nani-Kofi from the African Liberation Support Campaign Network and Pratyush from Revolutionary Democracy, the Indian communist review. NCP leader Andy Brooks spoke about the NCP’s struggle to build a Bolshevik party over the past three decades and Dolly Shaer made a rousing call for the Special Appeal during the formal part of the social and comrades showed their commitment by raising £1,425.93!
photo: Jang Song Chol and Alex Kempshall
Posted by london communists at 11:34 am No comments:

Stalin and the British Road to Socialism

STALIN & THE BRITISH ROAD TO SOCIALISM

LABOUR MPs last week expressed support for striking cleaners on the London Underground who walked out last Thursday 26th June and called for an end to poverty pay on the Underground. Some cleaners are on pay rates of little more than £5.50 and are demanding a living wage of £7.20 per hour.
John McDonnell MP, who chairs the Labour Representation Committee, said: “It is a disgrace that poverty wages are being paid to workers facing substantial increases in their living costs, and who provide an essential service for Londoners.
“This level of exploitation of vulnerable workers is barbaric in a so-called civilised society.
“Some of the managers and shareholders of the companies employing these workers should try living on these wages in our capital city.”
Jeremy Corbyn MP said: “We won the ‘London Living Wage’ under Ken Livingstone to end poverty pay on the London Underground. Where is Boris Johnson on this issue?”
Posted by london communists at 1:48 pm No comments:

THE INTELLIGENCE agency MI5 last week came into conflict with flood risk experts as it called on the Government to keep secret maps of areas liable to serious flooding if any of the country’s dams were to break, because, they claim, terrorists might use the maps to work out which dams to attack to have maximum impact.
Specialists in the Cabinet Office and the Environment Agency are calling for more information to be made public as the risk of major flooding increases with climate change. catastrophic
Recently previously secret information revealed that record rainfall at the Ulley reservoir near Rotherham in Yorkshire nearly led to failure of the dam, which would have had catastrophic consequences.
MI5’s own London headquarters are on the north Thames embankment close to Lambeth Bridge. Any damage to the Thames Barrier could see their building flooded – along with the Houses of Parliament and most of Whitehall.
Meanwhile the Fire Brigades Union is warning that a year after summer floods caused havoc, the safety of rescue crews remains at risk because Fire and Rescue Services remain under resourced to cope with major flooding. Fire and rescue crews still lack even basic safety equipment such as waterproof clothing, boots and life jackets.
The warning comes from the FBU, whose members were praised for their key role in rescuing over 7,000 people from floods in June and July last year. It is also urging them to adopt Scotland’s lead and introduce a legal duty on fire and rescue authorities to respond to major floods, backed up with extra resources.
The call comes as the FBU publishes a wide-ranging report, Lessons of the 2007 floods – the perspective of fire crews, produced by the Labour Research Department. It draws on the experience, expertise and perceptions of crews involved in last summer’s floods, alongside official reports and Government documents. U-turn
The report charts how Ministers performed a U-turn only three months before last summer’s downpours, when they decided not to include response to major flooding in the Fire and Rescue Services (Emergencies) Order for England.
The lack of a legal duty means fire and rescue authorities in England are still prevented from applying for new funding for the extra equipment, training and personnel needed to deal with the increased risk of flooding climate experts predict.
The Government now faces mounting pressure to make responding to floods a statutory duty as both the FBU and leading fire chiefs say it is needed to prepare for and respond to future flooding. Scotland already has a statutory duty in place.
Posted by london communists at 1:46 pm No comments: