Labour activists demonstrated their support this week for a leading activist accused of ‘anti-Semitism’ by Zionist elements within the Labour Party. Jackie Walker’s Labour Party expulsion hearing began on Tuesday at the Deptford Lounge community centre in south London – but she was forced to withdraw from the hearing when the most powerful Labour Party disciplinary committee refused to allow her the right to make a short opening statement in her own defence.
Jackie Walker, who is a black Jewish woman, was suspended from the Labour Party two and a half years ago for asking a Labour Party anti-Semitism trainer, at an anti-Semitism training event, for a definition of anti-Semitism. Since then she has been the subject of the most appalling and unrelenting racist abuse and threats, including a bomb threat.
This week Jackie attended the long overdue Labour Party disciplinary hearing. She was accompanied by her defence witnesses and legal team; she had submitted over 400 pages of evidence in her defence. The Chair advised Jackie at the beginning of the hearing that this was to be an informal hearing and that she could address him by his first name. The Chair then invited procedural questions. Jackie asked to be allowed to make a brief opening address to the Chair and Panel. The large team of Labour Party lawyers objected.
The Chair adjourned the meeting to consider Jackie’s request to speak. Despite repeated requests from Jackie’s lawyer that she be allowed to speak at the outset of her hearing, the Chair ruled that Jackie remain silent. Jackie had no alternative other than to withdraw from the hearing because it was clear to her that she would not receive a fair hearing.
Jackie Walker said: “After almost three years of racist abuse and serious threats, and of almost three years of being demonised, I was astounded that the Labour Party refused to allow me a few short moments to personally address the disciplinary panel to speak in my own defence. What is so dangerous about my voice that it is not allowed to be heard?
“All I have ever asked for is for equal treatment, due process and natural justice; it seems that this is too much to ask of the Labour Party.”

The following day Jackie Walker was expelled for “prejudicial and grossly detrimental behaviour against the party”. The Jewish Voice for Labour movement has condemned the decision saying: “The decision to expel Jackie Walker from membership, and the whole process leading up to this shameful conclusion, are a travesty of justice.
“The Party has enabled a process in which a principled and fearless member has been persecuted by violation of trust, by media campaign, through bullying by senior members within the party, and by a seriously flawed process which has allowed racist commentary on her person to form part of the charge against her.
“Jackie Walker is not the only member to have suffered from this cavalier attitude to due process and natural justice, though hers is perhaps the most egregious case. Why have those in positions of influence within the Party who have access to the megaphone of the mass media not been reined in? Why indeed have they not been charged with bringing the Party into disrepute, which they have surely done?
“It does not bring the Party into disrepute to criticise a deeply flawed definition of antisemitism. It does not bring the Party into disrepute to call for the Party to live up to its principles and abhor all racisms without gradations of importance, all holocausts without exception. What brings the Party into disrepute is to suppress free expression in order to appease the powerful.
“JVL believes that the Party will before long come to be deeply ashamed of this passage in its history”.

Posted by london communists at 4:27 pm No comments: 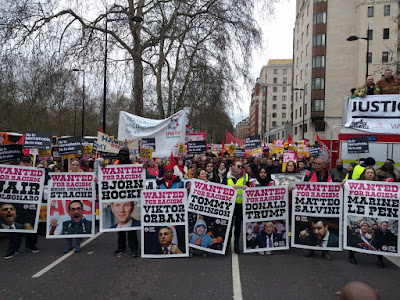 On Saturday London comrades joined thousands of other anti-fascist protesters who marched in unity against racism and fascism following the massacre of Muslims at a mosque in New Zealand last week. They assembled in Park Lane and marched to Downing Street, pausing only to lay a wreath at New Zealand House in memory of those who died in the attack in Christchurch, the New Zealand capital. They marched along with those in Glasgow, Cardiff and 60 other cities across the world taking part in similar events to mark United Nations Anti-Racism Day.
Stand Up To Racism co-convener Sabby Dhalu said the event had “a more sombre tone than previous years because of what happened in Christchurch. These types of hatred, terrorist attacks do not happen in a vacuum. There is a link between the hatred peddled by the politicians and the media, and hate crimes on the streets and places of worship.” 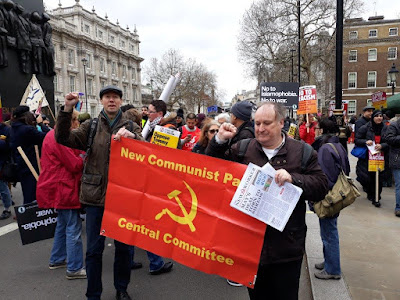 At the rally in Whitehall Diane Abbott, Labour’s Shadow Home Secretary, said: “We are still in shock after the Christchurch attack. We have to fight fascism and white nationalism wherever it rears its head. And we have to fight the enablers of anti Muslim hatred wherever we see them.”
TUC General Secretary Frances O’Grady said: “Now more than ever we must promote our values of tolerance and diversity. Racism and fascism have no place in our society. As trade unionists we’ll continue to stand up to the forces of hatred and division, and won’t flinch in our campaign against the far right.”
Posted by london communists at 6:05 pm No comments: