by New Worker
correspondent
Friends of the Korean people met at the Chadswell Centre in central London on Saturday 21st May to hear report-backs from two comrades who have recently returned from Democratic Korea and to express their solidarity with the Workers Party of Korea which has just successfully concluded its 7th Congress.
The meeting, called by the Korean Friendship Association, heard Dermot Hudson and David Munoz speak about their visit to the DPR Korea in April, and heard a report from Thae Yong Ho from the DPRK embassy in London.  A friend of the DPRK from Sweden addressed the meeting about the Pyongyang International Film Festival and the Wonsan Air Festival and many others joined in the general discussion that followed.  New Communist Party leader Andy Brooks took part in the meeting together with a number of comrades from London and East Anglia along with Prof Harish Gupta, the head of the Asian Regional Institute of the Juche Idea.
The meeting denounced the lies and slanders of the BBC against the DPRK and the vile and poisonous attacks on Dermot Hudson, the KFA and the Juche Idea Study Group by sectarians and dogmatists on the “Red Youth” website. Future action including a picket of US imperialism’s London embassy in June was discussed before the meeting concluded with informal discussion over refreshments.
The UK Korean Friendship Association (KFA) organises solidarity meetings and protest pickets in London throughout the year. The KFA also works side by side with the Friends of Korea committee which also holds regular events in the capital.
Posted by london communists at 12:22 pm No comments: 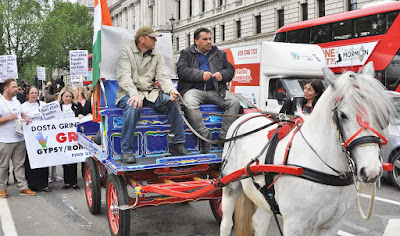 A LARGE group of Gypsies, Roma and Travellers assembled in Parliament Square on Saturday 21st May to protest at a new law governing their rights that sets them in a “Catch 22” situation and threatens their continued existence as an ethnic group.
They brought with them several traditional decorative horse-drawn carts, banners, placards and a petition of around 4,000 signatures.
And as they marched around Parliament Square their slogan was: “Five hundred years and still no justice!”
The Gypsies, Roma and Irish Travellers (GRT) are recognised by international human rights laws as an ethnic community.
But the Government is introducing new planning laws that will force them to prove they are Romany Gypsies or Irish Travellers by sustaining a travelling lifestyle – while the number of sites where they can legally stop is just not enough and being reduced dramatically.
The aim of the demonstration was to demand the withdrawal of this new law, which seeks to meddle with who they are and deny their children a home.
In a recent article for the Guardian, Mike Doherty of the Traveller Movement called discrimination against Gypsies and Travellers “the last acceptable racism”.
“Roma” make up Europe's largest ethnic minority and Britain is home to 300,000 Gypsies and Travellers, yet “Who is a Gypsy?” is a complicated and contentious question. Gypsy, Roma and Traveller groups are diverse and whether definitions focus on nomadism, ethnicity or heritage, there is little coherence between different policies for different purposes.
But it is clear that GRTs are amongst the most marginalised people in Europe, suffering high levels of exclusion and discrimination. In Britain GRTs experience extreme levels of poverty and inequality: poor educational provision, leading to low educational outcomes; worse health and lower life expectancy; stereotyping and abuse; job insecurity; and poor mental health.
If you use Google to search a definition of “Gypsy” the first answer that comes up in www.urbandictionary.com describes Gypsies as: “Fucking scum of the earth... Biggest scumbag wankers...” This sort of hate speech would not be acceptable if directed to any other ethnic minority. But it is commonplace for GRT groups.
Romany Gypsies and Irish Travellers in the UK are recognised as separate ethnic minority groups and are supposed to be protected by the 2010 Equalities Act, but this safeguarding is seldom felt by GRTs.
Spokesperson and campaigner Shay Clipson says that racism is promoted by irresponsible hostile media reporting. But, she says, perpetrators of discrimination or attacks don't view themselves as racists.
"They think this is different because we're the same colour. We've been slow to respond to discrimination in the past but now we're taking people to task. We've had enough.”
In August 2015 the definition of “Gypsy or Traveller” changed in the Government's planning policy for traveller sites. The policy sets out guidelines for councils to follow when assessing the need for Gypsy and Traveller sites.
Prior to August 2015, the definition of “Gypsy or Traveller” that an individual must fall under to be eligible for a mobile home or caravan site was as follows: “Persons of a nomadic habit of life (for economic purposes) whatever their race or origin, including such persons who on grounds only of their own or their family's or dependents' educational or health needs or old age have ceased to travel temporarily or permanently...”
The critical change is that the words “or permanently” have been removed and this small edit poses serious challenges for Gypsies and Travellers. It means that those who have ceased to travel permanently for whatever reason may lose any realistic chance of obtaining planning permission for a site on which they can lawfully station their caravan.
Yet the majority of Gypsies and Travellers in Britain are in fact settled. Moving around is increasingly difficult due to the absence of stopping places and a lack of jobs. And discrimination makes a “nomadic habit of life” doubly difficult. By settling in one place, Gypsies and Travellers have access to stable employment, healthcare, other vital services and education.
Human rights barrister Marc Willers QC said in an article for the Travellers' Times that “the concept of Gypsy status can be seen to restrict those ethnic Gypsies and Travellers who wish to continue living in caravans to low paid and manual work... Ethnic Gypsies and Travellers... should have the ability to pursue any career they choose without fear of being disenfranchised when it comes to seeking planning permission for a Gypsy site.”
In positioning nomadism for economic purposes as a prerequisite, this new definition of “Gypsy or Traveller” is “grossly insulting” to ethnicity and cultural heritage, says Clipson.
Posted by london communists at 12:15 pm No comments: 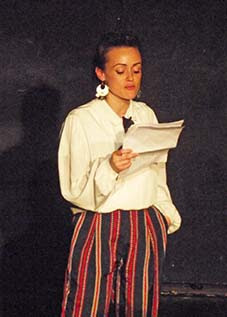 Supporters and activists from the Palestine Solidarity Campaign (PSC) gathered on Sunday 15th May for a cultural event to commemorate the 68th anniversary of the Nakba catastrophe, Registered Alive, at the Courtyard Theatre in London’s Hoxton district. The performances included a Dabke dance by the Al Zaytouna Dance Theatre, the renowned actor Maxine Peake reading from Masoud’s latest play [The Shroud Maker], a reading by British Egyptian poet Sabrina Mahfouz (pictured right), a live score from musician and composer Dave Randall, and the comedian Mark Thomas reading from his book [Extreme Rambling], about his walk along the entire length of the Israeli Separation Barrier in 2010. Introducing the event, Hugh Lanning, chair of the PSC, said: “the Nakba catastrophe isn’t just history, it’s ongoing and continuing today. Colonisation of the West Bank by Zionist settlers is actually accelerating and there are now over 600,000 settlers in the occupied West Bank and East Jerusalem.” The Nakba evening was one of 80 events organised by the PSC across Britain. Lanning said that over 1.5 million people had viewed the PSC’s new Twitter hashtag in the last 6 months.
Posted by london communists at 12:08 pm No comments: