LIFE-LONG anti-fascist campaigner, Suresh Grover, who has been a British citizen for several decades last week received a text message from the UK Border Agency, telling him "You are required to leave the UK as you no longer have right to remain."
Suresh Grover is currently head of the west London-based civil rights organisation, the Monitoring Group. He's entitled to be here – has been since 1966 – and he has indisputably "given back" to the community.
He was one of the first leading lights in the campaign to bring Stephen Lawrence's killers to justice. The other day, Grover received a text.
The message was a mistake, made by the computer company Capita working on behalf of the UKBA. The Home Office gives Capita regular "data drop" information from its database of people who have had a "negative outcome".
Suresh Grover’s text was one of many intimidating messages now being sent out to people who are deemed to be in Britain illegally.
It is the UKBS’s replacement for the ill-judged giant post vans telling illegal immigrants to go home, which had the effect of winding up racist hostility to legal immigrants and frightening many people who are perfectly entitled to be here.
But Suresh Grover is not the only British citizen to have received one of Capita’s text messages by mistake. At least 200 others have made official complaints and there may be many more who are afraid to do so.
Posted by london communists at 10:10 am No comments:

Email ThisBlogThis!Share to TwitterShare to FacebookShare to Pinterest
Labels: anti-fascism

INVESTIGATIVE journalists working for the BBC last week uncovered letting agents in London who are prepared to discriminate against would-be tenants on the grounds of race.
Under the Equality Act 2010, it is illegal for businesses to refuse to provide a service based on ethnicity.
But 10 firms told a reporter posing as a landlord they would not let to African-Caribbean people at his request.
A black researcher was denied viewings, yet his white counterpart was welcomed.
BBC London was initially tipped off certain letting agents were willing to discriminate against African-Caribbean people on behalf of landlords, with the alleged misdoing rife in parts of west London.
To expose the practices, a plush three-bedroom flat in north Kensington was acquired. Letting agents from 10 firms were invited to assess its rental value.
All 10 were recorded on secret camera saying they would be prepared not to show the flat to African-Caribbean people – and many detailed how they had done it before.
The lettings manager at A to Z Property Services, in Dollis Hill, said: "We cannot be shown discriminating against a community. But obviously we've got our ways around that.
"Ninety-nine per cent of my landlords don't want Afro-Caribbeans or any troublesome people."
The lettings manager at National Estate Agents, Willesden, said: "When someone [African-Caribbean] comes in, we won't advise them of this property.
"Even if it does get [asked about] we make up an excuse, to be honest with you."
When a black researcher asked to view the property, the National agent told him: "I'm sorry, that one's gone."
The property was still on the market - and a white researcher got offered a viewing.
The A to Z agent told the black researcher he would call him to arrange a viewing. Despite a second inquiry, the agent never got back in touch.
The agent had previously explained how he could deter unwanted tenants, saying: "We don't say no there and then. We just don't call them back (laughter)."
Once again, the white researcher received an appointment with no fuss.
Posted by london communists at 1:29 pm No comments: 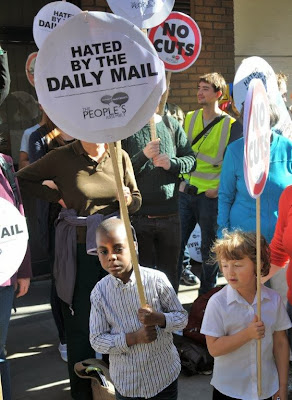 HUNDREDS of people gathered outside the headquarters of the [Daily Mail] newspaper to protest at the hate campaigns run by the right-wing tabloid.
The protest was organised via Facebook by the People’s Assembly and was prompted by the Daily Mail’sattack on Ralph Miliband, the father of Labour leader Ed Miliband, whom the paper described as “the man who hated Britain”.
Journalist Owen Jones led the protests on Sunday afternoon with demonstrators holding placards saying: “The Daily Mail hates me” and pointing to all the aspects of modern British life that the paper frequently demonises: immigrants, people on benefits, the disabled, single parents – and so on.

Posted by london communists at 11:00 pm No comments: 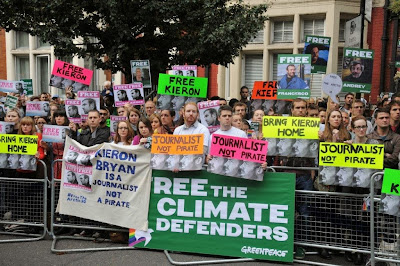 AROUND 1,000 demonstrators gathered outside the Russian embassy in Kensington, London, last Saturday to demand the release of 30 Greenpeace activists who were arrested a week ago by the Russian police on a charge of piracy after they tried to board a Russian oil drilling rig in the Arctic Sea.
The protesters included a number of celebrities: Jude Law, Imelda Staunton, Jim Carter, Dame Vivian Westwood, Damon Albarn and many more.
Russia's Investigative Committee said in a statement the charge, which can result in a 15-year prison term upon conviction, was filed on Thursday 3rd October against 16 members of the crew. The other 14 crew members were similarly charged the day before.
The Russian coast guard seized the Greenpeace vessel, the Arctic Sunrise and everyone aboard following the 18th September protest at the offshore platform owned by Russia's state-controlled energy giant Gazprom.
The activists are now in custody in the northern city of Murmansk.
Kumi Naidoo, Executive Director of Greenpeace International, said: “The activists were taking a brave stand to protect all of us from climate change, and the dangers of reckless oil drilling in the Arctic.
"Now it’s imperative that millions of us stand up with them to defend the Arctic and demand their immediate release. Gazprom, Shell and the other oil companies rushing to carve up the Arctic and destroy its fragile environment must see that we are millions and we will not be bullied and intimidated into silence.
“We stand as one, in countries across the world, demanding the release of these 30 brave men and women.”
Posted by london communists at 10:56 pm No comments:

Comrades from several different organisations came together last Saturday in South London to celebrate the formation of the Workers Party of Korea on October 10th  at a social organised by the Friends of Korea.
Youg Ho Thae, minister at the DPRK embassy, explained the history of the formation of the Workers Party of Korea, which was directly descended from the Down With Imperialism Union by the young, patriotic student leader Kim Il Sung in October 1926.
During the anti-Japanese war there was a communist party cell in each guerrilla unit. It was only practically possible to establish the Communist Party of North Korea after the North was liberated in 1945.
After the defeat of the Japanese in 1945 country Kim il Sung raised the question of forming a unified communist movement, and following the foundation of the Democratic People's Republic of Korea in September 1948 the communist parties of north and south came together to form the Workers Party of Korea on  October 10 that year.
Comrade Thae pointed out that “since World War 2 the country which had used chemical weapons more than any other is the US, which has the largest stockpile of these weapons in the world. Even now, tens of thousands of children are being born in Vietnam with terrible deformities”.
He added that the deadline for the US to eliminate these weapons under the Chemical Weapons Convention was this year, “but now Washington has said this would not be possible for another 10 or 12 years”.
Speaking on behalf of the Revolutionary Communist Party of Britain (ML), Michael Chant told the meeting that the Korean communists led by Kim Il Sung had worked to solve the problems faced by the Korean people step by step, and made the people the decision-makers.
The formation of the Workers Party of Korea by Kim Il Sung as the mass party of the Korean people, he said, “has enabled the people to unite with one will to develop the country”.
Dermot Hudson of the Korean Friendship Association recalled that the song used as the anthem of the Korean People’s Army, the Red Flag, was written by a British socialist, and that as a song identified with the DPRK it is still illegal to sing it in south Korea.
He said “the Workers Party of Korea is surging forward under the banner of Songun leadership of dear respected leaders Kim Jong Il”, with new housing and leisure facilities and long-range rockets”.
The Workers Party of Korea is continuing the struggles against dogmatism, factionalism, revisionism and “raising the banner of socialism high in Korea and in Asia”, he said.
Bringing greetings from the NCP, Theo Russell said 10th  October  was an important day for communists the world over, when “a new party of the toiling masses was formed on Korean soil, the Workers Party of Korea”.
He said the party had made unique contributions to the international movement: the Juche idea which had unleashed the enormous creative energy of the masses, and the concept of self-reliance and the Songun army first policy, which are admired by small nations around the world attempting to resist imperialist bullying and diktat.
The meeting was followed by music provided by Michael Chant and Lesley Larkum, who performed Let us love our motherland, Arirang, and the national anthem of the DPRK on the violin and keyboard.
Posted by london communists at 10:27 pm No comments: