NCP leader Andy Brooks joined Government ministers, academics and members of the business community celebrating China’s National Day in London on Tuesday. The Chancellor of the Exchequer Philip Hammond and Health Secretary Jeremy Hunt, whose wife is Chinese, were amongst the guests, which also included General Sir Christopher Deverell and members of London’s diplomatic corps, at a reception at the Langham Hotel in London’s West End to mark the 67th anniversary of the founding of the People’s Republic of China.
Chinese Ambassador Liu Xiaoming opened the formal part of the celebrations with a welcome speech that covered the growing links between China and Britain over the years. He said: “… a great deal can happen in six years and a great deal can be achieved. Over the past six years China has made tremendous progress both at home and in its ties with the world.
“We have put forward the ‘two centenary goals’ aimed at building the ‘Chinese Dream’.
“The first centenary goal is to build China into a moderately prosperous society by 2021. That will be the year when the Communist Party of China marks its 100th anniversary.
“The second centenary goal is to build China into a modern, socialist country that is prosperous, strong, democratic, culturally advanced and harmonious. The aim is to achieve this target by 2049. That is the time to celebrate the 100th anniversary of the founding of the People's Republic.
“In order to achieve these goals, we have laid out the Four-pronged Comprehensive Strategy. This includes building moderate prosperity in all respects; deepening all-round reform; advancing the rule of law in every aspect; and strengthening all-round Party discipline”.
Comrade Liu Xiaoming talked about the key concepts of the current Five Year Plan, which were: innovation; balanced growth; a green economy; continued opening-up; and inclusive development – adding that the “implementation of the 13th Five Year Plan will ensure the continued strong growth of China's economy.”
On the world arena, the Chinese ambassador said: “Earlier this month China successfully hosted the G20 Summit in Hangzhou. The summit focused on moving towards an innovative, invigorated, interconnected and inclusive world economy. This was the latest example of a Chinese solution and Chinese wisdom for addressing the challenges in the global economy. This was China's contribution to the global efforts aimed at a strong, sustainable, balanced and inclusive growth of the world economy”.
Liu Xiaoming also spoke about the deepening relations between London and Beijing. “In the past six years, remarkable achievements have also been made in China–UK relations. The ties between our two great nations have been constantly upgraded. The ‘Super State Visit’ to the UK by President Xi Jinping last October marked a significant milestone. During that visit our two countries decided jointly to build a global comprehensive strategic partnership for the 21st century. Together we unveiled a ‘Golden Era’ of China–UK relations.”
“Despite the unexpected changes following the Brexit referendum and British government reshuffle, the vital interests that bond our two countries together, and the fundamentals of China–UK relations, have remained unchanged.
“I am pleased to see that Prime Minister May attended the G20 Summit in Hangzhou and had a successful bilateral meeting with President Xi.
“The leaders of our two countries reaffirmed the ‘Golden Era’ for the China–UK relationship and reiterated the shared commitment to bringing our global comprehensive strategic partnership to a higher level.
“I am also glad that just days ago the British government approved the Hinkley Point project and reaffirmed its welcome to Chinese investment in the UK.
“I am equally glad that Chinese businesses have maintained enthusiasm to do business here in the UK despite the Brexit referendum. They have cast their vote of confidence with continued investments and contracts.”
The Ambassador highlighted the developing dialogue between Britain and China on a whole host of political, economic and cultural issues.
"If two people are of the same mind, their strength can cut through metal and their consensus-based argument is as appealing as the fragrance of orchid flowers.
“This is an ancient Chinese quote praising the power of co-operation and concerted efforts. As President Xi said, China and the UK are permanent members of the UN Security Council and important members of the G20 and other international organisations. Stronger and closer co-operation between our two countries not only benefits our two peoples, but also serves the interests of world peace and development.
“Next year will mark the 45th anniversary of the establishment of ambassadorial-level diplomatic ties between China and the UK. This will be a time to review the past experience. This will also be an opportunity to create even deeper foundations upon which the future of our relations will be built.
“China stands ready to work with Britain to increase further our political mutual trust; to deepen our exchanges and co-operation across the board; to consolidate the China–UK global comprehensive strategic partnership in the ‘Golden Era. And together we can make a success of it!”
Posted by london communists at 7:29 pm No comments: 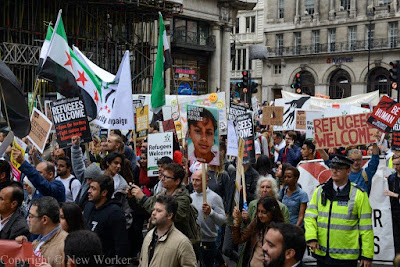 AN ESTIMATED 10,000 people gathered in Park Lane, London on Saturday 17th September for a march and rally to demand that Theresa May and her government fulfil their obligations under international law to admit more refugees to Britain to help to alleviate the growing world refugee crisis.
The march, organised by Solidarity with Refugees,  Amnesty International, the Stop the War Coalition and a number of charities was one of many around the world aiming to put pressure on the United Nations summit for refugees and migrants, which began in New York on Monday and was hosted by US President Barack Obama. Theresa May also attended this summit.
Currently there are 65 million displaced people and another 20 million in danger, the highest number since the end of the Second World War.
Marchers carried banners and placards from many diverse organisations, parties and community groups. Prominent slogans were: “No-one is illegal”, “Stop the drowning”, “Choose love” and  “Be human”.
The speakers at the rally in Parliament Square, where the huge march from Park Lane concluded  included Green leader Caroline Lucas, Labour peer and veteran campaigner Alf Dubs as well as actors Vanessa Redgrave, Douglas Booth, Juliet Stevenson and Liberal Democrat campaigner Shas Sheehan.
Vanessa Redgrave told the rally: “Citizens in this country, of whatever background, all want to obey the law. There are human rights laws. The present government and previous governments, Labour, coalition and Conservative, have been breaking international human rights law. We must hold them to account.”
Lord Dubs, who arrived in Britain under the Kindertransport programme for Jewish children as a six-year-old fleeing Nazi persecution, said in his speech that the Government has been “pretty hopeless” at dealing with the issue.
He told the crowd as he pointed towards Parliament: “I tell you, speaking here is a million times better than speaking in there. There is only one thing that is shifting this government and that is the force of public opinion and that means you.”
Solidarity with Refugees director Ros Ereira there had been a lack of leadership over taking action on the issue. “This week is going to be Theresa May’s first opportunity as our Prime Minister to represent us at a global summit.
“I really hope she is going to set the tone for what kind of a country we can be post-Brexit and with her new leadership. Hopefully she will want to portray us as an open, tolerant, welcoming society that wants to play an important role on the global stage and lead an appropriate global humanitarian response.”
Green MP Caroline Lucas told the rally that the solution to the refugee crisis is “not just humanitarian, it is political will”. She added: “It is not a crisis of the numbers of people coming, it is a crisis about the way the Government is managing it.”
She accused the Government of “failing to recognise that those seeking refuge in the UK are not desperate to come here, they are just desperate”.
According to the UN’s refugee agency, more than 3,200 people have died or gone missing attempting to cross the Mediterranean to Europe so far this year. Figures show a total of almost 300,000 people have attempted the journey and thousands remain stranded in Greece and Italy in poor living conditions.
Last year’s Refugees Welcome event attracted 100,000 demonstrators according to the organiser and took place shortly after the publication of pictures of refugee toddler Alan Kurdi’s body washed up on a Turkish beach.
Following that rally, the Government agreed to resettle 20,000 Syrian refugees by 2020. But, Ros  Ereira said, progress since then has been much too slow.
“We were really excited to hear the agreement was made,” she said. “I was always going to wish it would be more and better than that – but it was a huge step in the right direction. We are not on track to be meeting that commitment at the moment and of course we need to be doing more. The situation is growing, there are people dying and we need to stop that happening.”
Posted by london communists at 12:22 pm No comments: 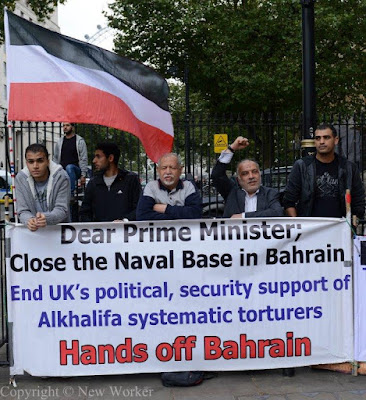 Demonstrators were outside Downing Street last week protesting against British imperialism’s continuing support for the feudal Arab monarchy that is propped up by Saudi guns whilst holding its people in bondage. British imperialism returned to the former British protectorate last year with the construction of a new Royal Navy base on the oil-rich island in the Persian Gulf. The feudal Arab Khalifa family suppressed a popular uprising in 2011 with the help of Saudi troops and police from the other feudal Arab states. The Shia Muslim majority is denied civil rights and thousands of political prisoners languish in Bahraini dungeons.
Posted by london communists at 12:09 pm No comments: