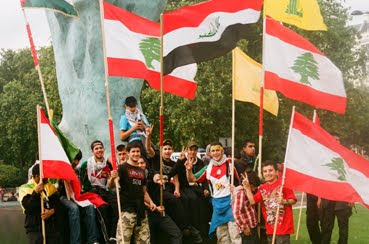 THOUSANDS of people joined the annual Quds Day Rally and march in London last Saturday, organised by the UK-based Islamic Human Rights Commission (IHRC).
The march was a peaceful, noisy, colourful affair supported by hundreds of family and community groups and political organisations.
Among the supporting organisations was a group of religious Jews in traditional costume who oppose Zionism as racist and oppose the occupation of Palestinian land. Their leaders walked hand-in-hand with the imams at the head of the march.
But it came under attack from three groups, who worked together as an unlikely alliance that said everything about their political opportunism.
The first was a group of dissident Iranians, claiming to be a Green Party but who were clearly from the American-backed opposition to the Ahmadinejad government. They tried to discourage support for the Palestinian cause on the grounds that it is supported by the Iranian government.
The second was a group of extreme right-wing fundamentalist Zionists, waving Israeli flags.
And the third and largest opposition group was from the English Defence League – a collection of football hooligans and other ill-informed “patriots” directed from the back by hard-core, long-standing neo-Nazis.
Amazingly these three groups were happy to make common cause and support each other, standing together outside the Hilton Hotel and causing the police to re-route the Quds day march as it made its way to Grosvenor Square and the United States Embassy.
Several provocative attempts by EDL supporters to attack the march were thwarted by police and those on the march remained calm and good-humoured and refused to be provoked.
Muslim youths on the march told the New Worker they were well aware of the EDL’s aim to spark a fight that, if they rose to the bait, would get them reported as violent lunatic Islamist fundamentalists in the right-wing tabloid press. They ignored the provocations.
The march passed into Grosvenor Square for a rally with speakers who put the blame for the continuing Middle East turmoil firmly on US imperialism with its massive financial and military backing of Zionist Israel, using the people of Israel as their surrogate military presence in the region.
A few EDL supporters made their way to the perimeter of Grosvenor Square but were kept firmly at the opposite end of the square by police.
Posted by london communists at 9:57 pm No comments:

Green thoughts in a green shade! 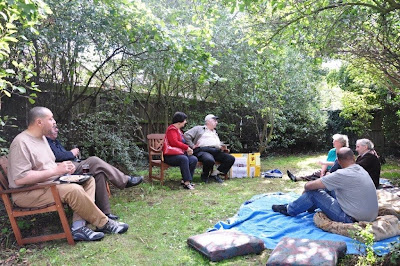 The South London New Worker Supporters Group held its annual fun-raising garden party in Charlton last weekend under the calming influence of shady trees and bird-song accompanied by the sound of fountains. There was also good food, drink and conversation and the event raised just over £18 for the New Worker.
Posted by london communists at 12:48 pm No comments: