Save Hong Kong from violence 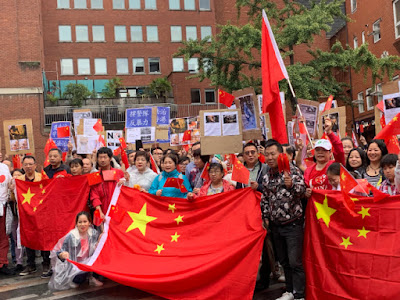 by Liang Xizhi and Gui Tao

It was raining heavily in London on Sunday 18th August. Yet for thousands of overseas Chinese and Chinese students attending the lunchtime rally to voice out their demand for peace and stability in Hong Kong, such bad weather would never sink their passions.
Waving the Chinese national flag and the flag of the Hong Kong Special Administrative Region (HKSAR), the crowd, sang the Chinese national anthem along the way from Chinatown to Trafalgar Square, and expressed their firm objection to violence and their strong support for the Hong Kong government and the Hong Kong police.
"I love Hong Kong, I love China" and "One China," chanted the crowd in Mandarin, Cantonese and English while holding placards written with slogans including "Stop Violence" and "Save Hong Kong”.
The weather cleared when participants of the peaceful rally, young and old, arrived at Trafalgar Square. They sang I Love You, China, My Chinese Heart and Pearl of the Orient among many other Chinese songs to show their solidarity and unity.
"We want to take today's opportunity to express our dissatisfaction with 'Hong Kong independence' and violence," said Zhang Yanqian, a student from Kingston University who participated in the rally.
"We speak the same language and keep the same blood. We should unite and make the motherland prosperous and strong," he said.
Zhang Feng, the chair of the Chinese Students and Scholars Association UK (CSSAUK), said the association “strongly supports the HKSAR government and police and firmly supports the one-China policy”.
The CSSAUK has called on Chinese students studying in Britain to remain calm and rationally patriotic to ensure their own safety, Zhang said.
The rally, co-hosted by the London Chinatown Chinese Association, the Hong Kong New Territories Heung Yee Kuk Overseas Liaison Office and more than 100 overseas Chinese communities in Britain, lasted for about an hour.
The rally was called to refute the lies of the “Hong Kong independence” organisations, to tell the outside world that Hong Kong is a democratic and free society, to express support for the Hong Kong government, and to oppose the violent protests over the past two months, said Chu Ting Tang, the chair of the London Chinatown Chinese Association.
For overseas Chinese Seuisang Gong, Sunday's rally was a good chance to show his support for the Hong Kong government and the Hong Kong police.
The Hong Kong government and the Hong Kong police should "unite and work together" to "implement the law and deal with all illegal things in accordance with the law," Gong said.
"I hope that the riots will be settled as soon as possible and these mobs will be brought to justice. We hope that the government can restore Hong Kong's social order as soon as possible and make people's livelihood more peaceful. I believe this is the most important thing," Gong said.
Xinhua
Posted by london communists at 10:41 am No comments:

Who guards the guardians…

The lot of a security guard is never a happy one. In addition to having to deal with hours of boredom enlivened only by drunken yobs and frequently more dangerous criminals during unsocial hours in low paid outsourced jobs that are often precarious, particularly when one firm losses a contract to another.
An example of the latter comes at the O2 Arena in Greenwich where a change of contractor means that 200 guards could lose their jobs. GMB has accused the departing contractor OCS of sabotaging rival company, Securitas, who have just won the contract. Normally staff working from the current provider would simply transfer over to the new company and see minimal change to their daily working lives.
This time round OCS is withholding the names of more than 200 of the current workforce in a bid to sabotage Securitas’ running of the contract. Roger Jenkins, GMB National Officer for the sector said: “Hundreds of dedicated security guards are being hung out to dry because of a corporate power struggle – it’s despicable.
“This is no way to treat the dedicated front line security we all rely on in terror attacks like the Manchester Arena and Westminster Bridge.
In a similar case another “sore loser” security firm lost a big contract and had the nerve to charge workers more than £220 each as a parting shot.
In this case the villain is Amberstone, who recently lost the ASDA distribution security contract. To mark the occasion, in the last pay run before departing, and without notice, they deducted the cost of each worker’s vital Security Industry Authority licence from their final pay packet – up to £220 per person.
This time Roger Jenkins said: “Amberstone’s leaving present to their hard-working employees was to line their own pockets and leave workers skint. Amberstone should hang their heads in shame. It is no surprise they lost this contract and the sooner they leave the security industry the better.”
In yet another case GMB has attacked Churchill Security for demanding that their guards download spy software on their personal mobile phones to allow Management to track their locations and ‘update you of shift changes’.
Churchill, which is based in Chorley, employs more than 160 guards across the country, including in Cardiff Bay, Cheltenham, Watford, Milton Keynes, Abingdon and London.
Roger Jenkins said: “This is appalling behaviour from a company trying to play big brother to hard working security guards.
“What they don’t need is employers making their job even harder, expecting them to download spy software onto their personal phones and tracking their every move.
One might wonder why trade unions organising in the private and public sectors do not devote some of their time and energy to demanding that major employers at least bring their security in house.

Posted by london communists at 9:15 pm No comments:

Workers at the Museum of London and the city’s Docklands Museum have had a below-inflation pay rise imposed by Britain’s richest local authority, the Corporation of the City of London. Trade union Prospect is to ballot its members at the Museum over the 1.5 per cent rise.
This is just the latest in a number of below-inflation pay rises that left workers at the museums with a nine per cent real-term pay cut since 2014. This austerity naturally did not apply to the director’s salary, which increased in real terms by five per cent including bonus last year, and the number of bosses earning over £100,000 year has doubled.
Sharon Brown, Prospect negotiations officer, said: “Our members are finding it increasingly difficult to cope on such low wages and this 1.5 per cent pay rise is especially galling when the director saw her pay increase by five per cent last year when you include bonus.
“The Museum will claim that with performance pay their offer achieves parity with inflation but an employee shouldn’t have to perform significantly above job requirements just to keep up with the cost of living. People need to be able to plan their finances and look after their families. A bonus should give people the possibility of improving their quality of life, not simply bring them up to the level they need to survive.”
Staff at the Science Museum Group (SMG) are also going to on strike in a dispute over pay.
A 24-hour strike has been scheduled for Friday, 30th August with a work-to-rule earlier that week.
Once again the issue was an imposed 1.5 per cent pay rise. Prospect said this was just the latest in a series of below-inflation pay rises that left workers with a 13 per cent real-terms pay cut since 2010, and once again the bosses were doing well. Members voted to reject the deal and voted 79.3 per cent in favour of strike action, with 94.8 per cent saying that they were prepared to take part in action short of a strike.
Sharon Brown said: “Members in SMG love their jobs but they cannot carry on with year after year of real-terms pay cuts. The group has left us with no option but to strike.
“I’m sure that most of the million or so people visiting SMG museums this summer will be astounded at how poorly its staff are paid, especially when they see that the director's pay has increased by a third in just four years.”
The union meekly added that it was not the intention of members to close the museums as a result of the action.
The union said the SMG’s minimum hourly rate is significantly below the voluntary Real Living Wage of £9 per hour and £10.55 in London.
The dispute covers not just the Science Museum at South Kensington but the National Science and Media Museum in Bradford, the Museum of Science and Industry in Manchester, the National Railway Museum in York, Blythe House in London and the National Collections Centre in Wroughton, Wiltshire.
Posted by london communists at 5:32 pm No comments: