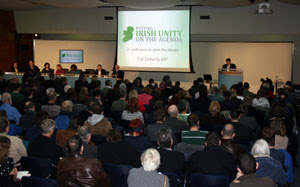 OVER 500 people attended a highly successful conference on Irish Unity at the TUC’s Congress House last Saturday, organised by Sinn Féin and attended by representatives from Ireland, the Irish community in Britain, trade unionists and political activists.
Opening the conference, Sinn Fein West Tyrone MP Pat Doherty said that “the denial of the Irish people's right to self determination" was a key outstanding issue of the peace process.
He characterised the Good Friday Agreement as "an accommodation, not a settlement", and said that the task ahead was "to work in partnership with others of like mind to build political support for Irish reunification", as well as putting the issue on the political agenda in Britain and internationally.
Doherty emphasised that regardless of the 1998 agreement, "for Irish republicans, the cause still persists – the British government's claim of jurisdiction over part of our country".
He welcomed the recent deal on devolving policing and justice powers as "part of a process of change".
Other keynote speakers included Sinn Féin negotiating team member Conor Murphy MP, Ken Livingstone, ex-Labour Northern Ireland spokesperson Kevin Mcnamara and fellow MPs John McDonnell, Jeremy Corbyn and Diane Abbot, and Salma Yaqoob, leader of the Respect Party.
The event certainly succeeded in bringing a large number of activists together and launching a debate on Irish Unity, with practical and highly informative discussions on the economic and political issues involved, building relations with unionism, and the Irish community in Britain.
It came against the backdrop of a recent poll showing that Sinn Féin is on its way to becoming the biggest party in the north of Ireland, with support at 21 per cent, several points ahead of both the DUP and the UUP.
Posted by london communists at 11:20 pm 1 comment:

Email ThisBlogThis!Share to TwitterShare to FacebookShare to Pinterest
Labels: Ireland 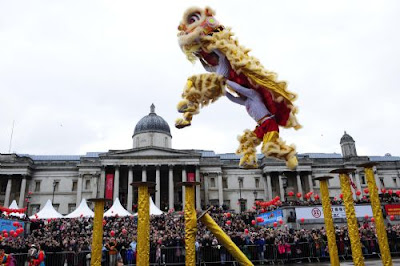 Londoners watch lion dancing during the celebration of the Chinese Lunar New Year in Trafalgar Square last weekend. Thousands of people took part in the Grand Chinese Lunar New Year celebrations held in Trafalgar Square, Leicester Square and Chinatown in London to mark the Year of the Tiger, which began on 14th February.
The London celebration was the largest outside China and last Sunday Soho’s Chinatown was bedecked with lanterns and decorations and packed with stalls while Chinese dancers and acrobats entertained the crowds throughout the day which ended with fireworks in Leicester Square.
Leslie Ng, the president of the London Chinatown Chinese Association, said: "Hundreds of thousands of people enjoy London's Chinese New Year celebrations, which have become a real highlight in the capital's calendar of events.
"It's an opportunity to celebrate and experience Chinese culture, and to see what Chinatown offers - not just during Chinese New Year, but all year round."
And in the capital an exhibition at one library has visitors clawing at the bookshelves. It's been set up to recognise the Year of the Tiger, and management hopes it'll have readers roaring for more.The week-long exhibition offers the latest in Chinese books for loan and sale.
An opening ceremony was held on Friday 19th February with representatives from the Chinese embassy and officials from Westminster council.They want it to act as a cultural bridge for British people to learn about China and also to generate more interest in books and the library. Westminster's Chinese library is in Charing Cross Road on the edge of Chinatown and it has one of the largest collections of Chinese materials in the UK's public libraries.
Posted by london communists at 11:13 pm No comments: 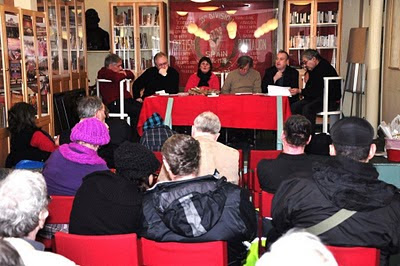 FRIENDS of Korea met at London’s historic Marx House last Saturday to celebrate the 68th anniversary of the birth of Comrade Kim Jong Il and take part in discussion on the current situation in the Democratic Peoples Republic of Korea, led by a panel of speakers who have all visited north Korea many times.
The meeting was held under the title of “The Defence of the DPRK is a must” and that was the theme of speakers, who included New Communist Party leader Andy Brooks, Michael Chant of the Revolutionary Communist Party of Britain (Marxist-Leninist), John McCleod of the Socialist Labour Party, Keith Bennett and Ella Rule (Communist Party of Great Britain-Marxist-Leninist) and Dermot Hudson from the United Kingdom Korean Friendship Association.
All paid tribute to Comrade Kim Jong Il, and his great leadership of the Korean people. A message of congratulations to Comrade Kim Jong Il was unanimously adopted with great enthusiasm by all present, expressing unbounded admiration, pledging that the progressive forces in Britain would always stand shoulder to shoulder with the Korean people in their struggles to build a powerful socialist country, against US imperialist aggression, and for the peaceful reunification of the Korean Peninsula. The message also placed on record the demand of the British people that the United States sign a peace treaty with the DPRK, and that it remove all its troops from the peninsula and end all threats to the DPRK.
The panel and participants from the audience expressed unreserved support for the DPRK in defending its right to be, and explained how the DPRK was above all standing by its principles of maintaining its independence and building socialism. The panel explained at length aspects of the life of the people of the DPRK, and elaborated on the stand of Democratic Korea in regard to the Six-Party Talks, the striving of the DPRK to create the conditions for the denuclearisation of the Korean Peninsula, and its contribution to combating the aggressive and hostile stands of US imperialism and its allies. The meeting expressed contempt for the anti-communism, which is a relic of the Cold War. It pledged to redouble its efforts in earnest to combat the disinformation spread about the DPRK and build friendship with the Korean people and their leadership.
The questions, answers and discussion could have gone on much longer, as the scheduled time for the conclusion of the meeting came. Participants continued to discuss the exploits of the great leaders Comrade Kim Il Sung and Comrade Kim Jong Il, and pledged further to build the Friends of Korea as a powerful friendship organisation which unites all friends of Korea in Britain.
Posted by london communists at 6:27 pm No comments:

Honouring victims of the Holocaust 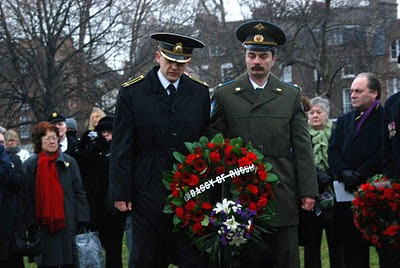 
VETERANS of the Second World War, ambassadors of the former Soviet republics, local dignitaries, communists and members of many progressive groups gathered last Wednesday, 27th January, in bitter cold in Geraldine Mary Harmsworth Park by the Imperial War Museum to remember the Nazi Holocaust and its victims.
The people gathered first around Southwark Council’s Holocaust Memorial Tree for a service led by local Rabbi, the Reverend Alan Greenbatt. He spoke of the liberation of Auschwitz by the Red Army on 27th January 1945 and the horrors that were found there. He said the purpose of remembering was to ensure that such things can never happen again.
This was followed by the singing of the 23rd Psalm and then the crowd moved to the memorial to the Soviet war dead.
Philip Matthews of the Soviet Memorial Trust Fund was the first to make a short speech. He was followed by the local Mayor, Councillor Jeffrey Hook, local Liberal Democrat MP Simon Hughes and a representative of the Soviet ambassador.
This was followed by the laying of wreaths by the embassies of the former Soviet republic, the various veterans’ associations, including the Arctic Convoy Club, and other organisations.
These included the New Communist Party, the Communist Party of Britain, the International Brigade Association and the Marx Memorial Library.
This was followed by the Last Post, the exhortation, two minutes silence and then closing remarks.
Posted by london communists at 11:31 pm No comments:

COACHLOADS of workers employed by the giant chocolate confectionary company Cadbury’s descended on Westminster last Tuesday, the day that Cadbury shareholders formally voted to accept the hostile bid from the American cheese company, Kraft.
They came to came to campaign to save their jobs and to enlist their MPs in that fight – and mindful of the fate of the Yorkshire based Terry’s chocolate manufacturer taken over by Kraft. Just three years after taking over, Kraft closed the Terry’s factory and moved production of the famous brand to eastern Europe, where wages are lower.
And Kraft is now complaining that it had to pay Cadbury’s shareholders above the market price; they will be looking to recoup that money and most probably through instant job cuts.
The workers were also lobbying MPs to support a campaign launched by their union, Unite, to urgently amend takeover regulations so that the loss of a great British manufacturer can never happen again.
Unite has repeatedly approached Kraft for details of its plans for Cadbury, but in vain. Kraft has declined to provide details of its plans and to give the workforce confidence that they will not be facing the axe.
Unite is calling on the Government to support their efforts to pin Kraft down on commitments, particularly in respect of the “promises” made throughout the bidding process that they would save the soon-to-close Somerdale plant in Keynsham.
Fears are deepening that with Kraft's heavy debt, estimated to be around £22 billion, Cadbury's new owners will inevitably look to make savings through cuts in the operation of its new acquisition, and that manufacturing in Britain will pay the price.
Unite says that workers and the Midlands community feel they have been heavily let down by the big shareholders and the City, who have ignored their plea of "Don't sell us out!", but that Government intervention can help secure them a future.
Jennie Formby, Unite national officer for food and drink, said: "While institutional shareholders and hedge funds will be selling out Cadbury and its workforce in the City – despite huge opposition from private shareholders and the general public – we will be fighting for its future.
"It is the dedicated Cadbury workforce and its army of loyal consumers who are this company's future. This is a great company, loved around the world and providing good jobs for thousands of people. We need to keep it that way – which is why we're coming to Westminster to ask our government and our MPs to do all they can to make Kraft commit to jobs and investment for Cadbury.
"We will also be urging Government to reform takeover regulations to ensure this never happens again; employees must have be given the voice and be able to negotiate guarantees before any takeover so that workers don’t pay the price for takeovers like this."
Unite's deputy general secretary Jack Dromey said: "Our fear is that the Kraft takeover is not in the national interest, and in the months of this hostile takeover process, we have heard nothing from Kraft to calm fears that it is in the interest of the Cadbury workforce either.
"Instead, the fate of manufacturing workers in Terry's of York, who found that Kraft ownership saw their plant close, weighs heavily on the minds of the Cadbury workforce."
He added: "The Government must secure meaningful pledges from Kraft, and police them so that Kraft cannot again walk away from a UK workforce.
"Ministers must make it abundantly clear that closures and mass redundancies will not be accepted by the British government or the British people."
Posted by london communists at 11:30 pm No comments: