Greenwich battle of the books

LIBRARY workers in Greenwich began a 48-hours strike last Wednesday in protest at plans to cut the borough’s mobile library service.
The union Unite called the strike as Greenwich councillors ploughed ahead with plans to close the mobile service which delivers 33,000 books a year to children, an increase from the 22,000 books lent last year.
The union said that what is at stake is children’s literacy, the gateway to future employment, which is being jeopardised for a comparatively small annual saving of £126,000; although the council has £320 million stashed away in reserves.
Unite regional officer Onay Kasab said: “Literacy is a fundamental human right and anything that erodes that life chance should be strongly opposed. Good reading skills are the key to decent employment in adulthood – so the blinkered actions of the council need to be condemned.”

A COMMUNITY group in the London borough of Bromley, calling itself “Backing Bromley”, was launched on Wednesday to “tackle councillors’ failings”.
Backing Bromley raised around 1,200 protest signs on Wednesday. The signs warned that residents are “no longer prepared to accept elected leaders falling short of their responsibilities to the young, the old and the vulnerable”.
Cray Valley resident David Christian said: “Backing Bromley is being launched so residents can come together to hold the council to account over its failures and we will be making our presence felt.
“We want our council to succeed but believe its leaders should be more responsive to us, the people of Bromley.
“The leader of the council, Stephen Carr and the deputy leader Colin Smith will no longer be able to rest on their laurels while old, young and vulnerable are let down because a new group is here to stand up for Bromley.”
Residents from Bromley Common and Keston, Bickley, Chelsfield and Pratts Bottom, Chislehurst, Copers Cope, Cray Valley West, Farnborough and Crofton, Hayes and Coney Hall, Plaistow and Sundridge wards have all joined to form the new group.
They complain of a “catalogue of failures” by councillors, with concerns over the treatment of whistle-blowers, school places, parental support for disabled children and the quality of care homes.

Posted by london communists at 11:24 pm No comments:

COMRADES and friends met at the John Buckle Centre in south London on Saturday to mark the 22nd anniversary of the passing of the Great Leader President Kim Il Sung on 8th July 1994.  The guest of honour at the seminar, called by the Friends of Korea committee, was Hyon Hak Bong the  ambassador at the embassy of the Democratic People's Republic of Korea in London and other speakers included Michael Chant from the RCPB (ML), Dermot Hudson from the Korean Friendship Association and New Communist Party leader Andy Brooks.

After questions and discussion the meeting ended with a film on Korean leader Kim Jong Un’s four years of victory informal discussion continued over drinks and Korean food.The Co-ordinating Committee of the Friends of Korea brings together all the major movements active in Korean friendship and solidarity work in Britain today. It is chaired by Andy Brooks and the secretary is Michael Chant. The committee organises meetings throughout the year, which are publicised by the supporting movements and on the Friends of Korea website.
Posted by london communists at 6:48 pm No comments:

For those who died in Spain 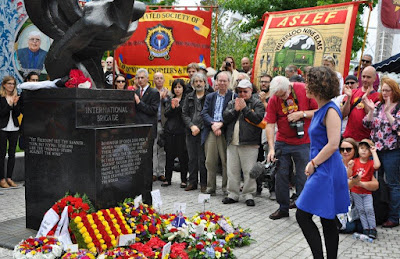 AROUND 100 people gathered on the South Bank in London last Saturday to remember the volunteers who fought and died in the struggle against fascism in Spain. The 80th anniversary of the start of the Spanish civil war on 18th July 1936 was commemorated at the annual ceremony at the International Brigade memorial in Jubilee Gardens on Saturday 2nd July.
The historian Paul Preston delivered the keynote address while other tributes were given by trade union veteran Rodney Bickerstaffe and Almudena Cros, president of the Madrid based Association of Friends of the International Brigades (AABI) along with the actress Maxine Peake, Spanish rapper Perro Lobo and the Na-Mara folk duo. Wreaths were laid by, among others, representatives of the Spanish embassy, the Catalan government's delegation in London, Spanish exile and refugee groups and the Association of Jewish Ex-Servicemen and Women.
Posted by london communists at 4:05 pm No comments: