ANTI-FASCIST campaigners gathered outside the French embassy in Knightsbridge in London on Monday evening to protest at the growing menace of fascism in France represented by the Front National candidate in the French presidential election, Marine Le Pen – and to express solidarity with French anti-fascists.
The protesters braved damp and windy weather and chanted: “Jamais Le Pen, Never Again!”
Le Pen is now in the same position as her father was in 2002 – having come second in the first round of the election she is now in the run-off between herself and the front runner Emmanuel Macron.
Macron heads the new party En Marche, which he founded himself just a year ago and which has experienced a meteoric rise in popularity.
Macron was a member of the Socialist Party from 2006–2009 and an independent from 2009–2016. En Marche claims seeks to transcend traditional political boundaries to be a trans-partisan organisation.
Macron has described it as being a progressive party of both the Left and the Right, and it is generally seen as a centrist party following a liberal ideology. Its rapid rise indicates serious disillusionment with the traditional parties amongst the French electorate.
It is this disillusionment that Le Pen is trying to tap in to with extreme nationalism, racist anti-immigration policies and the promise of a referendum on membership of the European Union.
In 2002 the shock of the fascist Jean-Marie Le Pen getting through to the final run-off jolted the French population into turning out en masse to grit their teeth and vote for the unpopular right-wing conservative candidate, the incumbent president Jacques Chirac, who obtained 82 per cent of the votes, thus securing the biggest majority in the history of the Fifth Republic.
That was an electorate that included a high proportion of voters who could remember the horrors of Nazi occupation. Now there are not so many of that generation around.
So anti-fascist activists in France now have a task on their hands to persuade people to turn out for the young and untested neoliberal Macron. Macron is currently leading in the opinion polls but his success cannot be taken for granted. In the first round of the election he scored 23.9 per cent of the vote compared with Le Pen’s 21.4 per cent.
Meanwhile Le Pen has stood down as the leader of Front National (FN) for the duration of the election to make herself appear ‘more presidential’ and less connected to the racism and Islamophobia of her followers.
Monday evening’s protest in London was organised by Unite Against Fascism (UAF), which accused Le Pen of “rebranding” fascism and the threat it posed to Muslims, Jews and trade unions.
Sabby Dhalu, UAF joint general secretary, said: “Giving a platform to Marine Le Pen and the FN has enabled the worst racism and anti-Semitism to grow again in France.”
Le Pen recently claimed that the wartime Vichy government was not involved in the infamous Vel d’Hiv round-up of Jews. She was referring to German-ordered detention of more than 13,000 Jews at the Vélodrome d’Hiver cycling stadium in Paris, colloquially known as the ‘Vel d’Hiv’, in 1942. Jewish groups have called her claim an “insult to France”.
Le Pen has also attacked Muslims, by comparing Muslims praying in the streets to the Nazi occupation, and has called for surveillance of mosques in France.
The UAF has expressed deep concern about the revival of racism and fascism throughout Europe recently – especially in Ukraine, Hungary and now Bulgaria, where a recent election to the National Assembly failed to produce an outright majority. Current negotiations to set up a viable coalition could result in extreme right-wing nationalists entering the government in Sophia.
Posted by london communists at 1:37 pm No comments:

No to new Korean war! 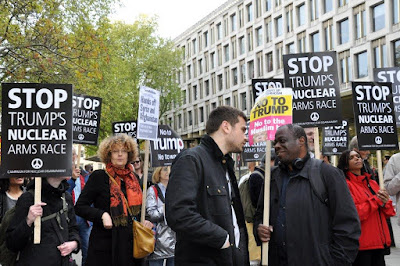 Londoners picketed the American embassy in Grosvenor square last week to demonstrate against a new Korean war brought nearer by the provocations of US war-lord Donald Trump in recent days. Stop the War and CND called the emergency protest outside the US embassy to protest at Trump's aggression and the British government's shameful support for his policy.  Hundreds of Londoners joined the protest against the new US threat to peace that has created a frightening stand-off with nuclear-armed Democratic Korea. This, combined with missile attacks on Syria and the use of a weapon of mass destruction (MOAB, the so-called Mother of All Bombs) in Afghanistan, signals a sharp turn to intervention that is ratcheting up tension around the world.
Posted by london communists at 1:25 pm No comments: 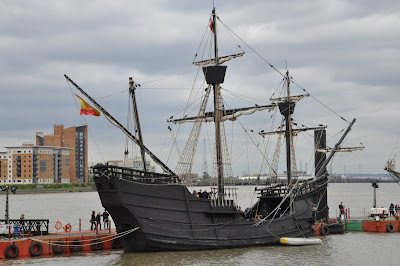 Londoners had a chance to see the Nao Victoria  and many other sailing ships at the Greenwich Tall Ships Festival 2017 last weekend. The Nao Victoria is a carrack, a replica of  the ship which became the first vessel to successfully circumnavigate the globe in 1522 as part of  Ferdinand Magellan’s expedition.
The Nao Victoria replica was built in 1992 and it has sailed around the world acting as a self-contained museum where visitors can learn more about the era of the explorers.
The festival over the Easter holiday gave Londoners the chance to see and even board nearly 30 Tall Ships taking part in the regatta. The spectacle followed the tremendous success of the Tall Ships Festival 2014 and it was London’s largest event over the Easter period.
Posted by london communists at 9:55 pm No comments: