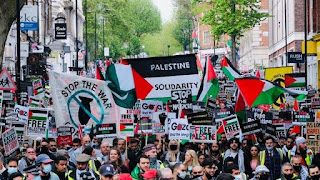 Former Labour leader Jeremy Corbyn called for the halt to British arms sales to Israel at a rally in central London last weekend. Demonstrating in Whitehall, Palestinian supporters called on the Group of Seven (G7) leaders currently meeting in Cornwall to support Palestinian rights.
As part of the ‘Resist G-7: Day of Action for International Justice’ rally demonstrators marched past Downing Street on Saturday calling for an end to British complicity in Israel’s war crimes against the Palestinians .
“At today’s Justice For Palestine demonstration in London, I also called for a halt to arms sales,” Corbyn tweeted. “UK-made weapons are killing civilians – including children – in conflicts abroad. This must stop,” he said.
The rally came as the informal club of seven leaders of the global imperialist camp – Canada, France, Germany, Italy, Japan, the United Kingdom and the United States – were meeting in Cornwall face-to-face for the first time in two years to tackle the global health crisis and climate change.
At the march, Raghad al-Takriti, the president of the Muslim Association of Britain, said the message to the G-7 leaders is clear. “It is to uphold international law. It is adherence to international law…it’s time for these leaders to talk about enforcement, to end the siege on Gaza … and to stop their complicity, their arms deals with Israel,” she said.
Thousands of protesters took part in the demonstration called by the Palestine Solidarity Campaign and the Friends of Al-Aqsa. PSC said: “All governments have an obligation to end their complicity and help dismantle apartheid. Instead of aiding and abetting Israel’s racist rule over the Palestinian people, the G7 must end all military-security cooperation with Israel, and employ targeted sanctions until Israel complies with international law.”
The protest was the latest in a series of pro-Palestine rallies which have taken place in London since clashes erupted in occupied Arab East Jerusalem over Israel’s planned expulsion of Palestinian families from the Sheikh Jarrah neighbourhood, the attacks on the Al-Aqsa Mosque compound, and Israel’s military assault on Gaza.
Hundreds of Palestinians have been arrested in Israel and the occupied West Bank for protesting against Israel’s policies. Some have been killed and many more wounded in confrontations with the Israeli police and armed Zionist settler gangs.
Last week members of the Palestine Action movement took over a Canadian-owned aerospace factory in Cheshire which manufactures military technology for Elbit Systems, an Israeli arms company .They scaled the roof of the APPH complex in Runcorn and daubed the building in red paint. They claim the factory produces landing gear for Elbit drones which were used in the conflict between Israel and Hamas in Gaza last month. Héroux-Devtek, the company which runs the APPH plant, has disputed these claims.
Palestine Action has been targeting Elbit facilities in Britain for months, demanding their closure and claiming that the parts and weaponry they produce are being tested and used against the Palestinians in Gaza and the West Bank.
Posted by london communists at 3:24 pm No comments: 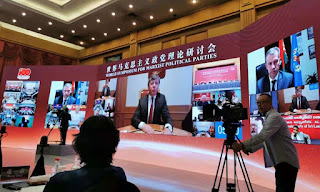 In July 1921, 13 delegates met in Shanghai for a meeting that led to the formation of the Communist Party of China (CPC). It now has a membership of 91,914,000 building “Socialism with Chinese characteristics”.
One of the commemorative events took place last Thursday, when its
International Department hosted an online World Symposium for Marxist Political Parties. This was attended by over 160 representatives, including 70 leaders from 58 parties in 48 countries across the globe, including delegates from the New Communist Party. NCP leader Andy Brooks and other members of the Central Committee joined communists from all around the world taking part in this virtual conference.
Although it was to commemorate a century of struggle, it was neither a backwards-looking occasion nor a purely celebratory one. The focus was firmly on the future of developing Marxism, on China and its future role in the world. Nor did the hosts omit criticism of the party’s present condition. One pointed out the CPC was busily engaged in rooting out corrupt officials.
Highlighting the importance of the event was the fact that it was opened by Song Tao, Minister of the International Department of the CPC Central Committee, who read a congratulatory letter from Chinese President Xi Jinping himself.
Amongst the introductory addresses was one from the Communist Party of the Russian Federation, which pointed that credit is due to the CPC for saving China from colonialism and for pulling its people out of poverty.
Three specialist panels followed. The first was on People-centred Philosophy and Poverty Eradication, which was not merely a celebration of China’s success in lifting all its people out of absolute poverty, particularly in the rural areas and western China. This success, said Song Tao, was no reason for complacency and was not the end of the road. He described China as having achieved a level of “moderate prosperity” with a per capita income of $10,000 dollars. This means that much more needs to be done. These achievements were envied by the ruling Congolese Party of Labour, who thanked China for much needed aid and reminded us that across the globe millions still lack safe water supplies.
The second panel was devoted to New Development Philosophy and High-quality Development, in which a CPC speaker noted that high technology innovation is vital for China to build on recent achievements. Many other poor countries, such as the former socialist countries of eastern Europe, made similar progress to China but never became advanced economies. A speaker from the All India Forward Bloc warned that that high glass towers are not always a positive development if they do not meet the legitimate aspirations of the people.
Thirdly and finally, the implications of China’s Belt and Road Co-operation (B&R) was discussed. Jiao Yang from China’s National Development and Reform Commission said that the B&R was essential for generating green development and a more positive globalism than exists at present. Alexei Sokol of the Communist Party of Belarus said China has helped many neighbouring countries, a point endorsed by a representative of the ruling Laotian People’s Revolutionary Party.
The Chinese speakers were at pains to suggest that China’s example should not be taken as a model to be mechanically applied, the CPC’s success was due to not slavishly following the Soviet model but due to the party creatively applying Marxism to local conditions, an example other parties must heed.

Posted by london communists at 9:13 am No comments:

Joint declaration condemning the continued bloodshed and occupation by Israel

We, the communist and workers parties undersigning this statement, strongly and unequivocally condemn the Israeli aggression meted out against Palestinians in Jerusalem - as well as the continued military bombardment upon Gaza which has resulted in the killing of scores of Palestinian civilians and the maiming of hundreds more, among them children.

Israel’s brazen violation of international humanitarian law and international law has continued for decades now, aided and abetted with the full support of imperialist forces, and without any meaningful intervention from international institutions to bring these violations to an end or outwardly condemn them.

We express our full and unwavering solidarity with the just struggle of the Palestinian people to end the occupation and towards the establishing of an independent state, within the recognised borders as they stood on June 4th 1967, with East Jerusalem as its capital, and the right of return for all Palestinian refugees according to the relevant UN resolutions.

We call on all progressive and peace-loving people to raise their voice and join this appeal.

Posted by london communists at 11:14 pm No comments: