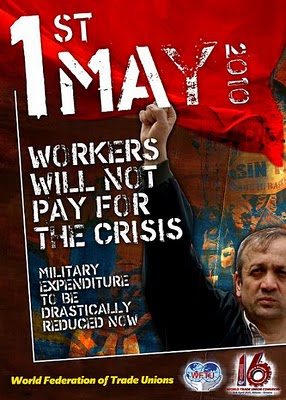 Posted by london communists at 4:57 pm No comments:

THE LATEST edition of Revolutionary Democracy has at last arrived from India and the double issue for 2009 continues its usual mix of articles, from the nitty-gritty of the struggle in India to the work of communists in Venezuela, France and Denmark. And, as usual, Stalin gets more than a mention.
A 20-page piece by Yuro Yemeliamov on Stalin’s death and the leadership struggle is followed by an even longer article on Stalin by Moni Guha, which is equally good. The debate on the British Road to Socialism (BRS), that began when Revolutionary Democracy published the Stalin/Pollitt correspondence two years ago, continues along with cultural articles and news from Stalinist currents within the world communist movement.
The double issue (April/September 2009) covers a lot of ground, including poetry from Victor Jara, Louis Furnberg and Biquis Zafirul Hasan. It costs just £3.50 including postage and packing from: NCP Lit, PO Box 73, London SW11 2PQ
Posted by london communists at 11:16 am 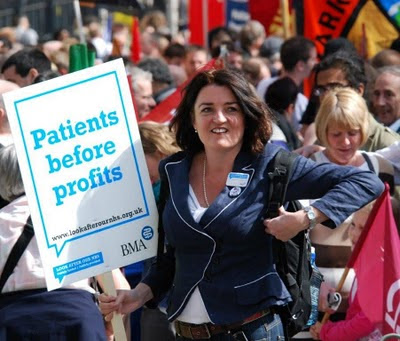 
THOUSANDS of pensioners, trade unionists, public sector workers and socialists from many different parties and groups gathered last Saturday by Temple Tube station on the Thames Embankment in London on 10th April for a march against cuts in public sector jobs and services, ending in a rally in Trafalgar Square.
A similar march and rally, also attended by thousands, was held in Glasgow’s Kelvingrove Park.
The weather was fine and the march was led by the banner of the National Pensioners’ Convention (NPC), who played a leading role in organising the event, closely followed by the RMT brass band and dozens of colourful banners.
The event was backed by over 20 trade unions including the TUC, GMB, Unite, Unison, PCS, the National Union of Teachers, RMT, TSSA, the British Medical Association, the Prison Officers’ Association, and a dozen or so other organisations, including the NPC, RADAR, Keep Our NHS Public, Carers Poverty Alliance, the Disability Alliance, Defend Council Housing.
Their message was for all the political parties standing in the coming general election: “Protect our welfare state and public services”.
“We’re meeting today at a critical time,” Doug Rooney, president of the TUC union umbrella body, told the crowd.
“Our economy remains in intensive care. Our pension system and welfare state is in crisis. And our public services face devastating cuts.
“Amidst this huge uncertainty – and regardless of who wins power in May – it’s the job of all the organisations supporting this event to defend public services.”
All three main parties have conceded that job losses will result from cuts in public sector budgets.
Unison general secretary Dave Prentis told the rally in Trafalgar Square that ordinary people were “paying the price” for the failure of bankers.
He said: “There has never been a more important time to show our support for public services.
“In the current recession, which has been caused by unregulated greed by bankers and speculators, people turn to the welfare state and public services for the help they need – help that will not come from the private sector.
“Yet politicians are competing with each other to cut those very services to pay for a deficit caused by bailing out the very private sector which caused the crisis.
“Today, you are acknowledging the amazing work done by people employed in the public services.”
That was a theme repeated by Unison president Gerry Gallagher in Kelvingrove Park: “In Glasgow and in London today, our key message is that public services should not suffer because of the bank bailout.
“Our members didn’t cause the crash, and neither did the people we serve every day in communities across Scotland.
“Cuts will damage recovery from recession,” he declared. “Cuts will hit public services we all depend on. Cuts will threaten the wellbeing of our members and their families.
“You all have your own stories to tell – and tell them you should. Because it is the combined voice of public service workers and service users that need to be heard in corridors of power!”
In London Doug Rooney, president of the TUC, told the rally that all those in attendance “must make the case for jobs and skills, decent pay and pensions, public services, generous welfare and benefits, and social justice, equality and fairness”.
Frank Cooper, president of the NPC, said it should not be “those at the sharp end who suffer” as a result of the financial crisis.
BMA chairman Dr Hamish Meldrum said the demonstration was non-political and he attacked politicians for failing to be transparent over cuts. He added:" There is a lot of rhetoric in terms of protecting the NHS but we are gravely concerned by any potential cuts after the election".
Jerry Nelson of the GMB said:" Since its beginning Labour has supported the welfare state. A decent society is one that recognises and invests in pensions, health care and education.
"But this is clearly now under threat; if the Tories win we will see a concerted attack on the services, services that protect the most vulnerable in society.
"When Labour came to power in 1997 36.6 pence in every pound was invested in public services, 13 years later it is now 41.5 pence. We need to protect this investment; the only way to do that is by returning a Labour government".
Posted by london communists at 9:28 pm No comments:

Why We Say Vote Labour

There have been modest gains since Labour was elected in 1997, such as increased spending on the NHS and education, the peace process in Ireland, devolution in Scotland and Wales, the restoration of local power in the Greater London Authority, pensioner winter fuel payments raised from £10 to £250 and extension of the use of bus passes.
Anti-union laws have not been repealed and the railways remain privatised but workers, through the trade union movement, enjoy greater influence under a Labour government and can now force bosses to recognise unions. These small victories would not have happened under the Tories.
This is why the New Worker, the paper of the New Communist party, is calling for workers to vote Labour in the general and local elections.
We support Labour even though we oppose New Labour’s wars in Iraq and Afghanistan and we do not believe Brown’s economic policies can solve capitalism’s ills.
Our call to vote Labour is based on the concrete conditions in Britain today.
A Labour government with its yet unbroken links with the Labour Party, the trade unions and the co-operative movement offers the best option for the working class in the era of parliamentary democracy.
The Conservative Party is the party of the wealthy. Its natural allies are big business, finance and big landowners and it is fundamentally hostile towards organised labour.

The fight for socialism

To permanently organise society for the benefit of working people can only happen through a socialist revolution that puts the working class in power. That can never happen through bourgeois elections.
The New Worker fights for socialism because it is the only way to end exploitation, unemployment, poverty, economic crisis and war. Socialism is the only answer to climate change and pollution.
But that doesn’t mean turning our backs on the immediate demands for social justice and state welfare put forward by the labour movement representing millions in the Labour Party and the trade unions – that would mean isolation from the working class.
At the same time we oppose the class collaborationist ideas of social democracy where financiers are courted and trade union leaders ignored.
We work for working class unity to strengthen the left and progressive forces within the Labour Party and the unions to create a democratic Labour Party that, when in office, will carry out the demands of the labour movement.
Such a left-social democratic government could bring about social reforms comparable to the creation of the “Welfare State” after 1945. This could be paid for by taxing the rich and scrapping Britain’s weapons of mass destruction. But only Labour, with its organic links to the working class, could bring this about.

The various parties offering an “alternative left” instead of Labour and standing candidates in general and local elections are actually dividing the labour movement and the working class. In the current electoral system, voting for the “alternative left” parties, tactical voting or abstaining, effectively means a wasted vote and ultimately benefits the Conservatives. A Conservative government, with or without support from the Liberal Democrats, will always be much worse than any Labour government.
The reality is that these “alternative left” parties are rejected time and again by the same working class their programmes claim to advance. There isn’t even a remote possibility of any of them taking office as the rhetoric and wild promises of these parties do not reflect reality.
The New Worker works with the working class as it really exists—a class that sees the Labour Party and the trade unions as representing its interests.
So the choice is: Conservative or Labour, regardless of unpalatable Labour policies. And if Labour is to win then every vote needs to be brought out.
A Labour government is the best possible outcome for the working class right now and the best way of taking forward the fight for socialism.
Posted by london communists at 4:55 pm No comments:

FAMILIES of the victims of the Bloody Sunday massacre welcomed a Government change of heart to allow family members to read the Saville Inquiry report before its official release. It was being delayed to allow Ministry of Defence scrutiny – and possible vetting of the document before the public get to see it.
The families issued the following press statement:
Bloody Sunday families and wounded are relieved that there has been a change of heart, after pressure from the families, to increase the number of family members accessing a report pre-read from one to two per family.
Families were informed of the decision by Shaun Woodward, Northern Ireland Secretary of State, that the Speaker of Parliament has agreed more than one person per family getting access to the report on the day of publication.
Gerry Duddy, whose 17-year-old brother Jackie was murdered on Bloody Sunday said of the news: “This development is obviously a lot better than one person being granted prior access to the report. It was widely felt that the pressure on one person would have been too much to bear. How they expected one person to absorb the findings of this colossal report is beyond us, especially considering that it is taking up to two weeks for legal experts to scrutinise these same documents.
“The fact that the Government has now conceded to allow two members of each family will certainly ease the burden of seeing the final report.
“However, we are still unhappy with these constant delays, the latest of which is the so-called ‘security review’ currently taking place. Despite continual assurances that he would release the report under this current government, the Secretary of State has yet to deliver.
“Our families, the wounded and the wider population of Derry have waited over 38 years for the findings of this Inquiry. This will be an incredibly emotional event and there will be a great deal of anxiety felt by both those involved in the report pre-read and by all other family members waiting patiently for its findings,” Mr Duddy added.
“After many long, hard years of campaigning the time has come for the British establishment to acknowledge their wrongdoings and set the truth free.”
Posted by london communists at 2:05 pm No comments: