Posted by london communists at 4:36 pm No comments:

The British Museum’s China and South Asia Gallery fully reopened to the public last week after renovation and refurbishment.
The gallery explores the cultures of China and South Asia through a range of magnificent objects.
One half of the gallery presents the histories of China from 5000 BC to the present. From iconic Ming dynasty blue-and-white porcelain to delicate hand scrolls, from exquisite Tang dynasty tomb figurines to contemporary ink paintings, the displays feature calligraphy, painting, jade, silk and porcelain.
Some of the modern artworks are on display for the first time in this gallery as the museum seeks to present a glimpse of present China.
The other half of the gallery presents South Asia's many histories chronologically and by region, from early human occupation to the present. Highlights include seals from the Indus civilisation, superb south Indian sculptures of Shiva and one of the finest statues of the goddess Tara from Sri Lanka, sophisticated paintings and objects from the courts of the Mughal emperors, and paintings by the Nobel laureate Rabindranath Tagore.
Hartwig Fischer, the Director of the British Museum, said that the museum has upgraded the floor, the air-conditioning, light and exhibition structure in a bid to allow the collections to be better seen and understood by the Museum’s seven million annual visitors.
“Obviously, it's about China and its glorious history in its different epochs. It's about giving visitors to the British Museum the opportunity to engage with these much more than five thousand, six thousand years of history. Because it goes all the way back to prehistory and taking it up to the present,” said the director.
The gallery also has incorporated various rotating light-sensitive objects such as paintings, prints, and textiles.
Xinhua

Posted by london communists at 3:37 pm No comments:

Grey London, an advertising company based in London, has added an amusing spin to traditional

The new lyrics use the popular Christmas tunes to speak out against patriarchy, sexism, unequal pay and sexual assault.
Refuge explains its mission with this statement: "Refuge opened the world’s first safe house for women and children escaping domestic violence in Chiswick, West London, in 1971.
Women and children flocked to our doors because, for the first time, someone was saying it was wrong to beat your partner. Back then, domestic violence was seen as a ‘private matter’, to be dealt with ‘behind closed doors’. Society turned a blind eye.
Since 1971, Refuge has led the campaign against domestic violence. We have grown to become the country’s largest single provider of specialist domestic and gender-based violence services. Now we support almost 5,000 women and children on any given day."
Telesur
Posted by london communists at 11:39 am No comments: 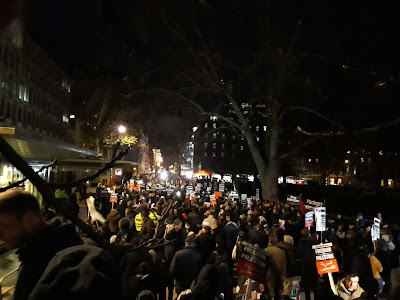 MASSES OF protesters gathered in London’s Grosvenor Square last Friday to express their anger at US President Donald Trump’s announcement of his recognition of Jerusalem as the capital of Israel and of his intention to move the US embassy in Israel to Jerusalem from Tel Aviv.
The protesters in London were amongst many thousands around the world who were also protesting at US embassies at this outrage against the rights of Palestinians, for whom Jerusalem has been their capital city for centuries.
The London protest was organised by Palestine Solidarity Campaign (PSC), Palestinian Forum in Britain (PFB), Friends of Al Aqsa (FOA), Stop the War Coalition (STW), Muslim Association of Britain (MAB).
It was also supported by: Muslim Voices, Stand up to Trump, Jews for Justice for Palestinians, War on Want, Association of Palestinian Communities in the UK, Olive and Europal Forum.
Cities around the world have risen up in solidarity protests whilst occupying Israeli forces attack Palestinians in the West Bank and Gaza Strip for standing up for what they refer to as "an act of aggression against the Palestinian people" and the end of the Palestinian–Israeli peace process.
"America has always been a part of the problem when it comes to Palestine; Trump has only highlighted this," said Ida Rosida, from Indonesia, outside the US embassy on Friday evening.
"Saudi Arabia's response has saddened me. I'm here as a Muslim in support for Palestine and I really think Arab states, especially Saudi Arabia, which has the moral responsibility to step up, should do more."
Fashion model Bella, who was passing from one engagement to another, jumped out of her car to join the protest, deciding to add her voice to the protest. Bella’s father is Palestinian and she has spoken of her support for the country before this.
In an Instagram post, she wrote: “I’ve been waiting to put this into perfect words but I realised there is no perfect way to speak of something so unjust. A very, very sad day. Watching the news and seeing the pain of the Palestinian people makes me cry for the many, many generations of Palestine.”
Another Palestinian protester, Salah Abu al-Kas, originally from Gaza, said he is determined to teach his children that they are Palestinian – no matter what happens to them or where in the world they go.
"Jerusalem is our city, and it is our capital, and we will not give up a grain of sand for anybody else," he said. "I hope by the time my son is an adult, there is a liberated Palestine but, no matter what, I will teach him that he is Palestinian. He will know his country and he will not give it up for the world."
Robert Borba, an American at the protest, described himself as a revolutionary activist. He joked about the way that he has been protesting for Palestine longer than many of the young people at the demonstration had been alive.
"As an American, I think this is a long sting of aggression," he said. "Trump has the capability to destroy the planet; he is a very dangerous man."
Despite this, he still has hope. "I would say to Palestinians that it is always darkest before dawn. People have been rallying for decades and solidarity movements are constantly growing. Palestine will never be forgotten."
Just before the protest Ben Jamal, the PSC director, told the press: “The essential message Trump wanted to deliver to the world was that it was time to accept reality. It is indeed, but not in the way he suggests.
“President Trump creates his own reality. Climate change is a myth because he thinks it is. Targeting Muslims travelling to the US is not discriminatory. And now he wants us to believe that declaring Jerusalem to be the capital of Israel, overturning decades of US policy that reflects the international consensus, will advance peace.
“But it is what he didn’t say yesterday that spoke volumes about his position on the status of Jerusalem. In particular, there were two crucial things missing from his White House announcement: first, any recognition of international law; second, any acknowledgement of the rights and legitimate claims of the Palestinian people.
“In 1980, when Israel attempted to legitimise its annexation of East Jerusalem by passing a Bill through the Knesset, the international community acted swiftly to condemn its actions as illegal. UN Security Council resolutions 476 and 478 identified the annexation as a violation of the 4th Geneva Convention and resolved that no states should locate their embassies in Jerusalem.”

Posted by london communists at 12:18 am No comments:

A Christmas school for the comrades


by New Worker correspondent
London comrades defied snow and ice to take part in a school on contemporary topics at the Party Centre on Sunday. The day’s event, organised by the London District of the NCP, was chaired by Alex Kempshall. Theo Russell opened on the NCP’s United Front policy, and NCP leader Andy Brooks dealt with communist solidarity and proletarian internationalism in the afternoon session on imperialism.
Although train cancellations prevented some comrades from coming, those who made it certainly thought the effort was worth it. Both sessions provoked lively discussion and £36 was raised for the New Worker fighting fund.
Posted by london communists at 8:42 pm No comments: