Following the recent wave of Black Lives Matter protests a number of institutions and organisations are re-examining their ethos’ to make them more inclusive. University College London has taken a stand to address its historical links with the controversial eugenics movement following an inquiry made earlier this year.
University College London (UCL) has now removed the names of two prominent eugenics from two lecture theatres and a building.
The University’s Galton Lecture Theatre had been named after Francis Galton, the man who first coined the term ‘eugenics’ in 1883. Galton was a cousin of Charles Darwin and believed that in order to ‘raise the present miserably low standard of the human race’ we needed to ‘breed the best with the best’.
The Pearson Lecture Theatre and the Pearson Building had both been named after Karl Pearson, the UK’s first professional chair of eugenics.
The Galton Lecture Theatre has been renamed Lecture Theatre 115; the Pearson Lecture Theatre has been changed to Lecture Theatre G22 and the Pearson Building will now be known as the North-West Wing.
The University said last week they would remove the signs on the building and lecture theatres with immediate effect and that other changes to names and maps of signposts would be made as soon as possible.
UCL’s president and provost, Prof Michael Arthur, who made the decision to rename the facilities following a series of recommendations earlier in the year told the Guardian it was “an important first step for the university.”
Eugenics was the study of selective breeding that aimed to improve the genetic quality of the human population by excluding groups deemed inferior and promoting those seen as superior.
“This problematic history has, and continues, to cause significant concern for many in our community and has a profound impact on the sense of belonging that we want all of our staff and students to have,” Prof Arthur said.
“Although UCL is a very different place than it was in the 19th century, any suggestion that we celebrate these ideas or the figures behind them creates an unwelcoming environment for many in our community”.
He added that this decision is “just one step in a journey” and that there is much more work to be done to address racism and inequality in the UCL community.
Ijeoma Uchegbu, a professor of pharmaceutical nanoscience and the provost’s envoy for race equality, said: “I cannot begin to express my joy at this decision. Our buildings and spaces are places of learning and aspiration and should never have been named after eugenicists”.
Sputnik
Posted by london communists at 8:47 pm No comments: 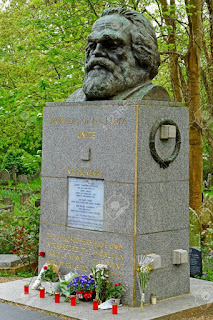 Karl Marx, the greatest thinker of all times whose revolutionary teachings became a guide for the struggles of the working class throughout the world, continues giving nightmares to fascists, reactionaries and anti-communists.
His tomb in Highgate cemetery in North London has been a target of cowardly attacks and vandalism by far-right thugs. In 2019, in a space of a month, the grave was vandalised twice by fascists who caused extensive damage to the marble plaque.
Recently, during mass protests over George Floyd’s murder in the USA, demonstrators tore down the statue of slave-trader Edward Colston in Bristol, whilst the statue of arch-imperialist criminal Winston Churchill was defaced by anti-racist protesters during a Black Lives Matter (BLM) demonstration in London.
In the USA, a statue of Confederate President Jefferson Davis was toppled in Richmond, Virginia and numerous statues of Christopher Colombus, from Miami to Boston, became the target of angry demonstrators.
A bunch of conservatives and fascists in Britain thought this is the right time to take revenge. They created a petition, addressed to Mayor of London Sadiq Khan, asking for the removal of Karl Marx’s tomb from Highgate cemetery. In their text accompanying the shameful petition, the fascists repeat the same old anti-communist nonsense about the supposed “100 million victims of Communism” and they accuse Karl Marx of “anti-Semitism”.
Responding to this filthy initiative, the Marx Grave Trust, which is the legal owner of Marx’s family grave and its monument, said: “In the wake of the welcome campaign to remove or re-site the statues of racists and slave-owners, there has been a black-lash by pro-fascist elements and their right-wing supporters...all he has is a grave, together with his wife and family. This has now been targeted. Such threats are not only rank desecration but an insult to the worldwide socialist movement for whom Marx is an inspiration.”
The trust said it had taken measures to secure evidence should it be attacked again and “calls on everyone to support the work of the Friends of Highgate Cemetery and the Marx Grave Trust … and by countering every attempt to damage the grave of a man who challenged exploitation and oppression”.
Endorsing every single word included in the statement of the Marx Grave Trust, we urge all communists living in Britain, every person who supports and admires Karl Marx’s legacy, every man and woman who stands against fascism and exploitation, to rise up against any attempt to desecrate the grave of the greatest philosopher humanity has ever seen.
Marx was, is and will always be a thorn in the eye of the bourgeois class, an enemy for exploiters and oppressors. Today, the struggle for Socialism–Communism is more necessary and timelier than ever. It is a certainty that the 21st century will be the century of new socialist revolutions despite the current unfavourable correlation of forces.
To the fascists and their allies, there is one message: HANDS OFF KARL MARX’S GRAVE!
Posted by london communists at 7:25 pm No comments:

Solidarity on the Green! 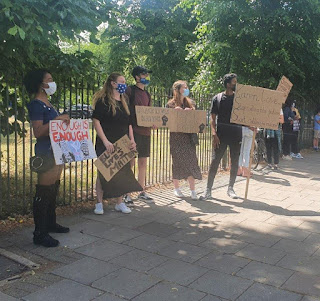 A cheery crowd gathered on Turnham Green this last Sunday for a peaceful protest in support of Black Lives Matter (BLM) and Justice for Grenfell. Around 200 people gathered at the Green which is in the middle of Chiswick High Street. quite a good turn-out for the affluent neighbourhood of West London.
It started as a small group meeting at Christ Church in the middle of the green at 1:30pm, walking through the green and lining up along the fence where it continued to grow. Local police were on hand to ensure social distancing was maintained and the pavement kept clear for pedestrians. They also fended off a motorist who stopped traffic to yell at us for several minutes before giving us the two-finger salute as he finally drove off!
Most locals were receptive, with many stopping to take pictures and record video and some even raising a fist in solidarity as they walked or cycled by. We had many motorists beep as they passed the demonstration. At one point a Black woman walking down the street realised why we were standing there, gave us a thumbs up and started to dance along the pavement to the music the organisers played over a small PA system.
The demonstration lasted an hour. Halfway through we knelt in silence for 8:46, the amount of time Minneapolis police officer Derek Chauvin knelt on George Floyd’s neck resulting in his death on 25th May. Once the hour was over most of the protesters left but a third stayed on to continue to encourage engagement from community.
Talking to others in attendance after the demonstration ended, they told me the crowd grew to the point that the line of protesters extended back into the green itself. There is word that the organisers have arranged for two more demonstrations in the coming weeks. So, if any of you are in the West London area please join them in solidarity of Black Lives Matter.
Posted by london communists at 6:46 pm No comments: