US Out of Korea!

Korean solidarity activists were out on the streets of London last week demonstrating outside the US and the south Korean embassies to protest at the latest war moves of US imperialism and their south Korean puppets. NCP leader Andy Brooks and other comrades joined the pickets called by the Korean Friendship Association on 20th October at a time of increasing tension on the Korean peninsula.
The protest started at 15:00 outside the south Korean embassy in Westminster and then moved on to the hub of US imperialism in Grosvenor Square to continue the action until 18:20.

Posted by london communists at 2:38 pm No comments:

GUY SMALLMAN is a rare kind of photojournalist; he is a freelance who is not sponsored by any 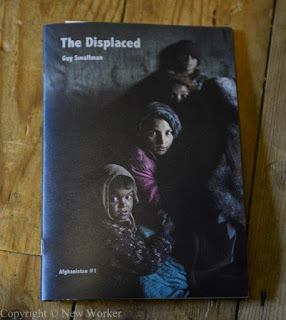 of the big media corporations or press barons but he gets to places in the world where there are important stories to be told about the impact of war and conflict on local people’s lives that western governments would prefer were not reported.

He is funded by a group of fellow left-wing journalists known a Reel News, and has been visiting Afghanistan regularly since 2008; he now has a network of friends there.
Guy does not make judgements or long political comments – he lets his camera do the talking and leaves us to make up our minds.
Last Tuesday, he launched a new booklet of stunning photos of “the displaced” – Afghan people who have been forced from their homes by the wars and are refugees in their own country, scraping by from one day to the next on next to nothing.
The biggest killer among them is cold and young children are the most vulnerable. One of the most poignant pictures is of a man carrying the small body of his 18-month old niece, Saiyma Gadazia, to bury her among the graves of other children after she froze to death on the floor of her home in Char-e-Qamba camp last January.
Her father, Safarali Gadazia, an unemployed labourer, had reluctantly moved his family to colder, more polluted Kabul as the Sangin district of Helmand province became intolerable.
Without an ID card he could not get work and would be arrested by the police or army on suspicion of being a “foreign fighter”. If he carried an ID card he risked being detained and beaten by the Taliban as a “government spy”.
Many of the pictures are children playing in the rubble of bombed buildings in Kabul, or huddling round small heaters for warmth.
Conditions are about to get worse as neighbouring Pakistan is carrying out its threat to expel three million Afghan refugees, many of whom have to homes or land to return to.
The book launch in Shoreditch, east London, was packed. Guy made a very short speech and Elsie Bowerman, whose group Voices For Creative Non Violence runs loads of projects for disadvantaged kids in Afghanistan, spoke of the reality of being a woman in modern Afghanistan and the extra difficulties they face in making a living because of the religious restrictions on women going out alone.

The Displaced costs  £10:00 and is published by Guy Smallman (guysmallman.com)
Posted by london communists at 2:20 pm No comments:


STUDENTS at the School of Oriental and African Studies (SOAS), part of the University of London, are protesting at a ban by the college authorities on the Hare Krishna free food provision for students – because it undermines the profits of the official franchised college eating places.
The Hare Krishna people have been providing plates of free vegetable curry to students and people in the Bloomsbury area for the past 15 years.
They also turn up on progressive demonstration in cold weather to provide free, good quality hot food for protesters.
They come to SOAS 6 days per week and serve nearly 700 people with a heart-warming smile. It is very disappointing that SOAS and the University of London prioritise their business interests over free and healthy Hare Krishna food, which many students and others rely on.
The alternative food options at SOAS are very expensive and not particularly healthy. The students want the Hare Krishnas to stay on the SOAS campus, where they have always been.
Posted by london communists at 12:34 pm No comments:


PROTESTERS gathered in Parliament Square in Westminster on  Saturday 15th October  to demand Government action to help refugees held in France’s infamous “Calais Jungle” camp, in a protest organised by Stand Up To Racism.
The demonstrators marched through the streets of London holding anti-racism banners and chanting: “Refugees are welcome here.”
An estimated 10,000 people are living in the refugee camp in Calais, known as the “Jungle”.
Conditions in the camp are overcrowded and unsanitary, and its inhabitants are also struggling with food shortages. The makeshift camp is located close to the Channel Tunnel linking France with Britain and there have been numerous incidents of people attempting to reach Britain by boarding trucks approaching the tunnel.
The French government has stressed that their British counterparts need to take their share of responsibility for the people in the camp. Visiting Calais in September, French President François Hollande expressed his “determination that the British authorities play their part in the humanitarian effort that France is undertaking and that they continue to do that in the future.”
French authorities want to close the camp by the end of the year and move the refugees to reception centres around the country. Aid groups have warned that the planned closure will lead to children and other vulnerable people disappearing and falling into the hands of smugglers – an issue raised by speakers during Saturday’s protest in London.
Organisers said that over 100 children went missing when French authorities shut part of the camp earlier this year.
Posted by london communists at 12:33 pm No comments: