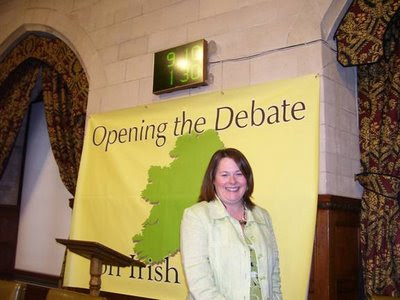 SINN Féin president Gerry Adams and Michelle Gildernew, agriculture minister in the Northern Ireland Executive, were in Westminster at Parliament last week to launch the party’s new initiative aimed at international debate on the question of a united Ireland.
Sinn Féin is planning a major conference in London next February and recently held a similar conference in New York.
In his keynote address Adams said: “The construction of a new relationship between Ireland and Britain based on equality is the single most important issue facing the people of Ireland and Britain”, and outlined three challenges.
“These are: getting the British government to change its policy from one of upholding the union to one of becoming a persuader for Irish unity; getting the Irish government to begin preparations for Irish unity; and engaging with Ulster unionism on the type of Ireland we want to create.”
Adams stressed the importance of understanding what Unionists understood about being British and looking at “new concepts and possibilities”, with any new structure based on agreement and respect for diversity. “That means,” he said, “that Orange marches will continue in a united Ireland, if that is the wish of the Orange”.
But he also underlined the “the right of the people of Ireland to independence and self-determination” – an aspect often overlooked by observers focusing on the concerns of the Unionist community.
Describing Irish partition as “one of the great contentious and divisive issues of Britain’s past,” Adams pointed to the remarkable changes in recent history. “Twenty years ago Margaret Thatcher said that Northern Ireland was ‘as British as Finchley,’ I was banned from the UK mainland, and Northern Ireland was gripped by military and political conflict”.
Both Adams and Gildernew emphasised the economic benefits for both jurisdictions of ending partition. Gildernew described Unionist farmers as having “minds which are British, but their cows are Irish” – in other words they wanted freedom of movement for their stock just like farmers in the Republic.
She said that swift action in 2007 to close ports, only six weeks after she took office, saved the livestock industry from foot-and-mouth disease, but pointed out that “as a devolved administration Northern Ireland has no powers to stop animals coming from high-risk disease areas”.
Adams said Sinn Féin intended to involve trade unions, the business sector, the community and voluntary sector, and the political class, “as well as with those of other ethnic minorities who have experienced a similar history of colonisation and immigration”. He noted that British Labour Party leaders “continue to uphold the union, and some, such as John Reid, have talked of changing the union. But a new type of union – it’s not possible”.
In an article in the Guardian newspaper last week, Adams pointed out that unionists make up fewer than two per cent of Britain’s population, and as such “cannot hope to have any significant say in the direction of their own affairs,” while they would carry far more weight as 20 per cent of a united Ireland and be able to “exercise real political power and influence”.
photo:Michelle Gildernew
Posted by london communists at 12:06 am No comments:

Remember the brutality of fascism 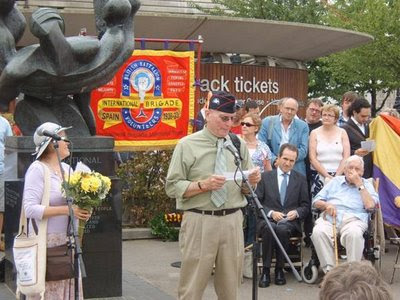 Saturday 4th July saw the International Brigade Memorial Trust hold their annual commemoration of the British volunteers who fought in the Spanish Civil War of 1936-39. In the shadow of the London Eye a number of speakers paid tribute to the volunteers who rallied in defence of democracy in Spain which in 1936 was faced by a revolt by the Spanish army (particularly the Spanish colonial army) backed by Hitler and Mussolini. The British government effectively assisted the fascist rebels by a policy of so called "non-intervention". Two thousand volunteers came from Britain to aid the republican cause, many were communists who fought in the International Brigades while others served in front line medical services.
This year the commemorations had an international flavour with speakers representing the Swedish and German organisations of Spanish Civil War veterans and their supporters. A member of the Veterans for Peace from the United States and a representative of the British Jewish Ex-Servicemen's Association both laid wreaths. Official recognition came in the form of the Spanish ambassador and representatives from the Catalonian regional government.
In June the Spanish Embassy hosted a ceremony at which the surviving British brigaders were awarded Spanish citizenship in recognition of their efforts. At the July ceremony The Ambassador admitted it was long overdue. One of the veterans honoured, Sam Russell, recalled earlier visits to the Embassy where he protested against executions carried out throughout the Franco years. He stressed it is important to remember that the brutality of the regime, which included executions of republicans by garrotting carried out until his death in 1975.
Tributes were also paid to three recently deceased veterans including Jack Jones, the TGWU leader who served as IBMT president.
Posted by london communists at 11:42 pm No comments: 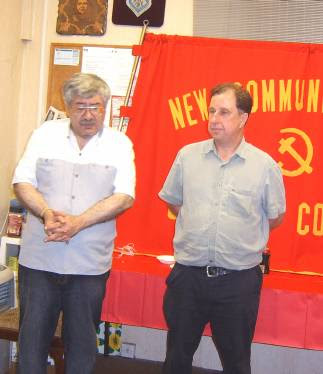 NCP leader Andy Brooks and Party Chair Alex Kempshall recalled the history of the communist movement in Britain at the NCP's founding day reception last weekend. The Party celebrated 32 years of struggle at the celebration at the Party Centre which raised over £1,700 for the New Worker Special Appeal.
Posted by london communists at 12:07 pm