Standing up to racism and fascism 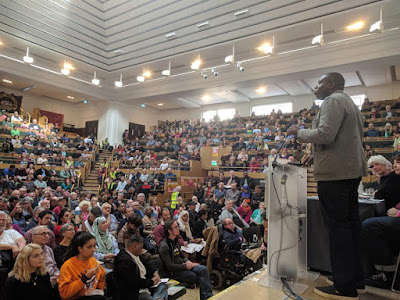 
Anti-fascists rallied to hear Labour leaders and anti-racist campaigners call for a new movement to roll back the rise of the far right at a conference last weekend. Over 1,400 activists, including representatives from similar movements in Europe, Brazil and Canada, took part in the day-long meeting at the Quakers’ Friends Meeting House in London’s Euston Road.
The conference, organised by the Unite Against Fascism movement and the Stand Up to Racism campaign, was supported by activists from all over the country. Labour was well represented with two leading members of the Corbyn team, John McDonnell and Diane Abbott, giving key-note interventions during the discussions on how we can defeat the rise of fascism and racism.
At the close of conference a racist ‘football lads’ gang tried to barge their way into the building but the robust response of the stewards speedily dealt with the degenerates who beat a hasty retreat.
Posted by london communists at 11:23 am No comments:

Korean solidarity activists met last weekend to hear a report back from members of a recent delegation to Democratic Korea that took part in celebrating the 70th  anniversary of the foundation of the Democratic People’s Republic of Korea in Pyongyang. The meeting at the Kings Cross Neighbourhood Centre in the heart of London was organised by the Korea Friendship Association (KFA), whose chair, Dermot Hudson had headed the UK KFA delegation that visited the DPRK last month.
It was a first time visit for one of the delegates who said: “as the American journalist Lincoln Steffens said after spending time in the early days of the Soviet Union ‘I have seen the future, and it works’”.
The meeting also commemorated the foundation of the Workers Party of Korea by great leader Kim Il Sung on 10th October 1945.Kim Song Gi ,  a diplomat from the DPRK embassy in London,  addressed the meeting saying that the anniversary was a great event as the Party is the force leading the Korean people forward . He said thanks to efforts of the WPK and respected leader Kim Jong Un  another successful inter-Korean summit had taken place. Moreover the WPK is pursuing people-orientated policies and is taking care of people's lives.
Theo Russell spoke on behalf of the New Communist Party and a message from the RCPB (ML) was read out.
A lively Q & A followed with questions about industrial democracy and workers control in the DPRK , sanctions , public transport fares , and free beer rations!
Posted by london communists at 12:14 pm No comments:

Head to Head with John McDonnell 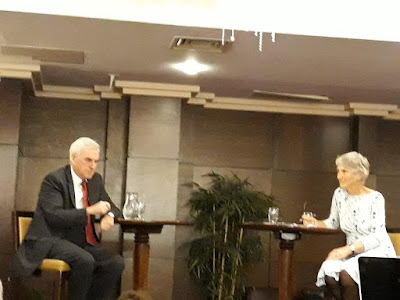 Jeremy Corbyn’s Number Two, the Shadow Chancellor John McDonnell, discussed the challenges facing a future Labour government with Jenny Manson at the Clayton Crown Hotel in Cricklewood last week. Jenny is a veteran Labour supporter and co-chair of the  Jewish Voice for Labour (JVL) movement that was established partly in response to the  Jewish Labour Movement's profoundly Zionist orientation. But the chair made it clear that the discussion would concentrate on Brexit, Labour’s answer to the economic crisis, and would not deal with any questions relating to Israel, Palestine or anti-Semitism.
Jenny Manson is firm favourite to be Labour’s parliamentary candidate in the Finchley and Golders Green constituency at the next election, and a wide range of issues from a socialist perspective were taken up, including how a future Labour government will pay for its plans and how Jenny Manson as a future MP could help realise these.
The first question she put to McDonnell was why Labour failed to challenge the lie that the 2008 financial crisis was the caused by government over-spending.
McDonnell replied: “After the 2008 crash I called for the government to ‘nationalise and stabilise’ the banks, but when the banks were nationalised the government failed to take control of their boards of directors.
“As a result, the injection of massive amounts of quantitative easing into the banking system was to the advantage of wealthy asset holders, while the rest of the population saw their living standards slashed. Those who caused the 2008 crisis are not the ones who ended up paying for it.
“When Gordon Brown lost the election and resigned as leader there was a vacuum when the myth of the government over-spending and the deficit causing the crisis went unchallenged.”
Asked by why the Labour leadership had adopted “austerity light” under Ed Miliband, McDonnell said that this was “one of the issues that propelled JC [Jeremy Corbyn] into the leadership”.
He described Andy Burnham’s abstention in the vote on the Tory benefit reforms as “shameful” and said: “Added to that, at that time people didn’t understand the full implications of what the Tories were doing.”
McDonnell said that Britain had been starved of commercial investment, saying “corporations in Britain have funds of £700 billion which are not being invested. We plan to set up a Strategic Investment Board bringing together the Bank of England, trade unions and employers.”
He said Labour also planned to spend £49 billion on the NHS and to abolish university fees.
Speaking about the shocking levels of poverty after eight years of LibDem and Tory government, he said that in his constituency, Hayes and Harlington in West London, “there are people sleeping on the streets, families renting sheds and garages to live in, people living in abject poverty because of benefits sanctions and bans, and children are out on the streets every day getting into drugs and gangs because their parents work such long hours.
“We’ve seen an 83-year-old asylum seeker taken to hospital in handcuffs where he died, still in handcuffs, and only recently a homeless person died only yards from the Westminster parliament.
“Record numbers of children are being taken into care because of families collapsing and we have four-million children living in poverty, two-thirds of them in families that are working.”
Without an election and change of government, this situation is only going to get much worse. McDonnell warned that: “The Tories are now planning cuts of £1.7 billion in the autumn budget and the Local Government Association has said many local councils can’t go on much longer. We are now facing a situation in which the entire social fabric of our society is at risk.”
Posted by london communists at 12:00 pm No comments:

Around a hundred workers responsible for maintaining electricity meters at Scottish Southern Electricity’s (SSE’s) London depots have won a pay rise of £2,807 after action led by the union Unite secured a London allowance.
For years about half of SSE’s workers in various London depots had been refused payment of a London Allowance that was being paid to other workers. A six-month campaign resulted in a collective grievance that was eventually heard by the company, which has finally brought success to workers who go in to London from depots outside London, including workers in Slough and Tiptree.
Unite regional officer Jane Jeffery said: “Over the years workers had been asking HR [Human Resources] why some were not receiving the allowance while others were. Management dragged their feet but collective action by the workers meant SSE eventually agreed to the pay-outs. The union is now seeking to ensure that the workers also get any back pay that they are due. It shows that it pays to be in a union that is prepared to fight for your rights at work.”
Earlier over 100 construction workers at three high-profile projects across London collectively secured an estimated £250,000 worth of holiday pay. More than 150 construction workers working for Byrnes Bros at construction projects including Westfield in White City, The International Quarter in Stratford and 100 Bishopsgate in the City secured payments of between £400–£1,000 each with further back payments to come.
Posted by london communists at 11:53 am No comments: