The US embassy in London was picketed by the UK Korean Friendship Association to mark the 63rd anniversary of the provocation of the Korean War by the US imperialists. The picket on 25th June was attended by members of the UK Korean Friendship Association , the Juche Idea Study Group, the British Assocation for the Study of Songun Politics, the New Communist Party including general secretary Andy Brooks and other progressive and anti-imperialist activists..
Posted by london communists at 10:08 am No comments: 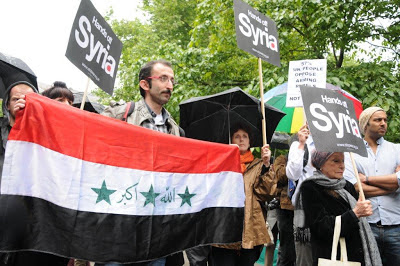 DOZENS of people gathered in Grosvenor Square last Saturday to protest at western interference in Syria and proposals to from the British and US governments to arms the rebels – who include many extreme Muslim fundamentalists like Al Qaeda. The protest was organised by the Stop the War Coalition.

The aim of the intervention so far has been to effect regime change, illegal under international law. The solution in Syria cannot lie in further militarising the conflict, or in intervention by western powers.
It is for the people of the Middle East to decide their own future. The western powers have a record and history of intervention which has been a key source of the region's problems.
According to Stop the War (STW), less than a quarter of the public believes that the Government     should arm the rebels in Syria, according to a poll in the wake of     Britain's support for the lifting of an EU arms embargo.
Just 24 per cent back giving weapons or military supplies to the forces fighting President Bashar al-Assad's army.
Public opinion would not be behind any military intervention, no matter how hands-off. In a sign of the public's changing attitude towards Britain's role in the world, 78 per cent of those polled said that they believe Britain is too overstretched as a result of Iraq and     Afghanistan to intervene in a new conflict.
Nearly three quarters (72 per cent) believe that Britain can no longer afford to act as a major     military power. More than two thirds (69 per cent) believe that Britain should restrict the military to protecting British territory and     providing humanitarian aid in times of crisis.
Posted by london communists at 8:51 pm No comments:

TWENTY-ONE climate activists belonging to the No Dash for Cash campaign last week were sentenced to long hours of community service but spared jail at Nottingham Magistrates’ Court for occupying the West Burton Gas-Fired Power Station last autumn.
Despite fears that some of the protesters might be facing jail terms, they were given lesser – but still punitive – sentences ranging from 18 months conditional discharges for five of the protesters, to varying numbers of hours of community service.
On the evening of the trial, other No Dash for Cash campaigners staged a solidarity picket outside the head offices of EDF in Victoria Street, London.
On sentencing, the judge remarked: “All of you are highly educated men and women, industrious committed individuals who wok and volunteer in your communities. Your motives were genuine... what you planned you executed to perfection.”
Speaking after the sentencing, Rachel Thompson said: “Although – thank goodness - none of us are going to jail, we are still facing penalties for simply standing up for clean, safe and affordable energy.
“Meanwhile everyone in the country will be facing a disastrously destabilised climate and rocketing fuel bills if we don’t stop the Government's reckless dash for gas.
“The Government is putting the profits of the Big Six energy companies before the fundamental need for a safe and liveable climate for generations to come.”
More than 64,000 people signed a petition in support of the No Dash For Gas protesters after EDF launched a £5 million damages claim against them. The lawsuit was quickly dropped in the face of this public outcry, and support for the campaigners seems to have remained strong.
Supporters of No Dash For Gas have also vowed to return to EDF's West Burton power station for a four day “Reclaim The Power” action camp in August.
The protest targeted EDF, an immensely powerful energy corporation with a history of abuse of corporate power, from the role of French secret agents in blowing up the Greenpeace Rainbow Warrior in New Zealand to illegally spying on Greenpeace activists to protect the company’s nuclear interests.
The "Climate Camp-style" gathering is expected to attract a mixture of climate campaigners, pensioners facing fuel poverty and anti-austerity activists, and promises a "surprising and inspiring mass action".
Ewa Jasiewicz, one of the 21 defendants said after the sentencing: “Reclaim the Power is about just that – reclaiming the power to decide where our energy comes from, what we use it for and how we organise our society in the public interest, according to people's needs and not for corporate greed.
“A decentralised, renewable, publicly-owned energy system is both possible and necessary if we are to avoid catastrophic climate change and ever-worsening fuel poverty".
The campaigners warn that Britain is currently on an unsustainable path with its energy generation. Last week MPs voted against a 2030 decarbonisation target, that would have locked in investor certainty to invest in renewable energy, and generated sustainable jobs and taxes across the booming green economy.
Posted by london communists at 2:28 pm No comments:

Holding the line against fascism 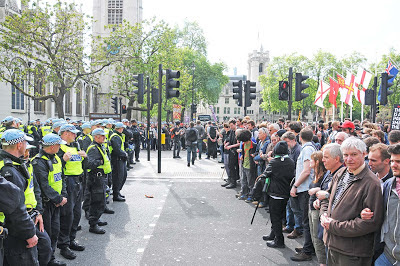 THOUSANDS of anti-fascists throughout Britain last weekend came out on to the streets to counter attempts by fascist organisation – mainly the English Defence League and the British National Party – to capitalise on the shocking murder of Drummer Lee Rigby in Woolwich two weeks ago.
And everywhere they succeeded in outnumbering the fascists, preventing them from marching and delivering the message that the vast majority of people in Britain want to live in peace and harmony with their neighbours, whatever their colour, race or creed.
But holding the line in London was not easy because of pre-planned police aggression against the anti-fascists. Police and the Greenwich borough local authority had banned a march by the BNP in Woolwich itself so the BNP rallied in Westminster.
Over a thousand anti-fascists, organised by Unite Against fascism and backed by many trade unions, gathered there to oppose the BNP who numbered only about 120.
The anti-fascist numbers were also swelled by animal rights activists who had come to London for a protest about badger culling and by Sikhs staging a long-term protest opposite Downing Street. 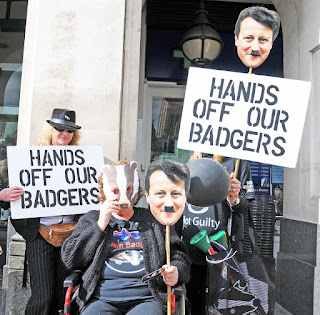 There were scuffles as a few BNP supporters, arriving late, had to run the gauntlet through the UAF ranks to get to their own meeting point.
The anti-fascists linked arms and blocked the proposed route of the BNP march along Whitehall.
Then the TSG – the riot police – tore into the UAF lines, arresting people with great brutality even though there was no violent resistance against them, seizing union banners, and herding arrestees on to two double decker buses they had brought along for that purpose. Legal observers were punched and pushed out of the way so that they could not record police brutality. This was planned and prepared by the police.
One young woman was hospitalised after sustaining a badly broken leg from being trampled by the TSG.
Nevertheless the line held and the BNP did not get to march. The anti-fascists were disciplined and courageous.
Weyman Bennett, UAF joint general secretary, did not cooperate with the police to divide the anti-fascist resistance,
The arrestees were taken to Battersea police station some miles away and were bailed and released in the early hours of the morning – many of them with minor injuries and badly torn clothing.
The UAF gave figures for the turn-out of anti-fascists compared to fascists around the country:

It is so important now that the ruling class is desperately trying to divide the working class along ethnic and religious lines to divert the growing opposition to austerity that the fascists, racists and Islamophobics are always opposed and stopped.
And this is happening; Britain is not like Germany in the 1930s and our Muslims will not be scapegoated, isolated and murdered as were the Jews in Germany.
And it is the UAF and its trade union supporters – the organised working class – who are leading the fight to stop this.

Posted by london communists at 6:35 pm No comments: