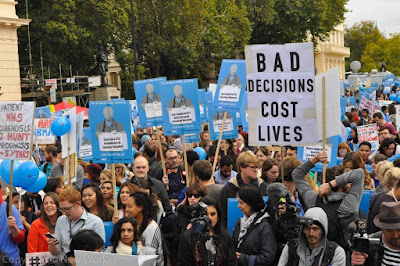 THOUSANDS of junior doctors last week gathered in Waterloo Place in London on Saturday 17th October for a rally and march to Parliament Square in protest at Government attempts to impose a new work contract that would cut their pay by up to 30 per cent while increasing the hours they are obliged to work.
They were supported by hundreds of nurses, other healthcare workers and patients – who would rather not face being treated by doctors who are too exhausted to be able to think straight.
The march was organised by the British Medical Association (BMA) – a body which rarely resorts to any kind of industrial action – as a “wake up call for ministers”. They are also considering balloting for strike action.
The BMA says the plans will lead to a drop in junior doctors' salaries. Health Secretary Jeremy Hunt has accused the BMA of misleading doctors and says the proposals would reduce their maximum weekly working hours but the BMA rejected this claim.
Thousands of junior doctors also staged rallies in Belfast and Nottingham. Critics say the new contract involves pay cuts of up to 30 per cent, with "normal hours" extended to include 07:00 to 22:00 every day except Sunday. In other words weekend working will no longer be paid at a higher rate.
Hunt said he wanted to remove financial penalties "that force hospitals to roster less at weekends" and was willing to negotiate over safeguards that will stop doctors from working too many hours.
The BMA is demanding that the Government withdraw its threat to impose the new contract in England from next year. Scotland and Wales have both said they will maintain the old contract.
Speaking to the BBC from the central London protest, junior doctor Animesh Singh said: "I have looked at the contract proposal with an accountant friend and looked at the kind of rotas I work.
"For me as an 11-year junior doctor I would see a 15 per cent cut in my pay and that's someone who's looking after patients who come into casualty every day of my working life."
Before the rally in London, Dr Johann Malawana, chair of the BMA junior doctors' committee said: "The truth is that the junior doctor contract is in no way a barrier to seven-day services, with the vast majority of junior doctors routinely providing care to patients 24/7."
At the rally Dr Malawana said the health secretary must stop lambasting junior doctors if he wants to settle a long-running dispute over his threat to introduce new NHS contracts.
“Stop attacking us. We are not the enemy. We are just health professionals who want to have a meaningful discussion. Talk to us, talk to us reasonably. Stop going to the press claiming that we are scaremongering.”
Talking to the Observer, Dr Malawana said junior doctors were still preparing to ballot for industrial action because they were so frustrated with Hunt’s handling of the dispute.
He said: “We feel that we are backed into a corner by the course of action that Jeremy Hunt has engaged in, which is effectively to say that he’s going to impose this contract and we have to agree with it.
“So we have no other way of stopping it, or expressing what our members feel, apart from balloting for industrial action.”
The BMA will reveal details of the ballot this week in an attempt to put further pressure on Hunt to compromise. The union is refusing to re-enter negotiations unless Hunt drops his threat to impose a new contract, which he has refused to do.
Posted by london communists at 12:19 pm No comments:

Wales and the world in solidarity with Palestine

IT IS HARD to maintain optimism about a lasting peace in the Middle East, as Netanyahu's government cranks up the rhetoric; 30 Palestinians and eight Israelis have been killed in recent weeks in escalating violence.


Israeli soldiers have opened fire on Palestinian protesters and raided refugee camps, while armed settlers and racist vigilantes have rampaged through Palestinian areas shouting: "Death to Arabs" in response to knife attacks.
Thousands of soldiers patrol Jerusalem and Palestinians have been banned from the Old City.
Palestine Solidarity Cymru called a vigil in Cardiff to demand an end to the violence last Saturday 17th October when similar pro-Palestinian demonstrations were happening all round the world.
Côr Cochion sang Palestinian peace songs: Biladi, La Tasalny and Yamma, which the choir had learnt during its first visit to the Occupied Territories in 1994. 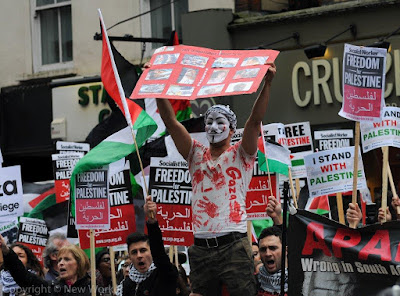 Many Palestinians in the crowd joined in the singing, and the vigil attracted a positive response from the many French and Irish rugby fans visiting the capital for the Rugby World Cup.
In spite of the tragic events of the past weeks, a sense of shared purpose gave strength to our determination to continue to work for justice in Palestine.
In the words of jailed Palestinian leader Marwan Barghouti: "The last day of occupation will be the first day of peace."
Meanwhile in London hundreds took part in two pro-Palestinian demonstrations – one in Kensington High Street near the Israeli embassy and the other a sit-down protest in Piccadilly Circus that halted London traffic for some time.
All around the world – in Paris, New York, Chicago and many other places, mass protests were demanding an end to the siege of Gaza and the illegal occupation of the West Bank.

Posted by london communists at 12:05 pm No comments: