By New Worker correspondent
ONLY five weeks ago, “sinister forces” were at work to stem Sinn Féin’s steady electoral advances in both parts of Ireland, when Sinn Féin president Gerry Adams was arrested under the terrorism act and questioned for four days in the midst of the local and Euro election campaigns.
Yet, as newly elected County Mayo Sinn Féin councillor Rose Conway Walsh told a packed meeting of supporters at Westminster last week, the party made stunning gains in both the north and the south last month. The crude tactics of the forces opposed to the peace process had spectacularly backfired.
In the European elections Martina Anderson topped the poll in the North with 25.5 per cent  of votes to take one of three seats, ahead of the DUP’s Diane Dodds on 20.9 per cent, while in the South Sinn Féin came second behind Fine Gael, taking three Euro seats.
Sinn Féin took third place in the Republic’s local elections, doubling its vote share to 15.2 per cent and winning 159 council seats, 105 more than in 2009, and pushing a broken Labour Party into fourth place.
In the north Sinn Féin’s vote fell slightly and the party won 10 fewer council seats than in 2010, but still took second place with 105 seats.
The party made gains in both working class and middle class districts in Dublin, and captured almost a third of votes in Monaghan and Louth. It appears to be on track to join a coalition government in Dublin after the 2016 general election, as many are predicting.
Gerry Adams declared: “The people have spoken and given the (Dublin) government notice to quit.”
Conway Walsh said: “Opinion polls show that many voted Sinn Féin because of our positive economic policies, with a strategy of investment, growth and better public services as the alternative to years of austerity, emigration and hardship.”
Asking: “Why a government which did so well in 2009 did so badly in 2014?” she said this was clearly due to the Republic’s dire economic situation. “Emigration and homelessness are increasing; €2 billion will be cut from this year’s budget and the same in 2015, 16 and 17; pensions are under attack; new charges for water and property are in place; there are 183,000 long-term unemployed, and 26 per cent of our young people are out of work.
“Despite the €64 billion given away to the banks, leaving a huge hole in country’s finances, the banking sector is still in a fragile state and promises of re-capitalisation have not been realised, while multinationals such as Apple and Shell are paying virtually no tax at all in the Republic.”
Conor Murphy, Sinn Féin MP for Newry and Armagh and the party’s economy spokesperson, spoke of the long list of issues arising from the Good Friday Agreement yet to be resolved or implemented: equalities, the Irish language, the Anglo-Irish institutions, a Bill of Rights in the North (guaranteed by all the GFA signatories), flags and parades, inquiries and inquests, and the recent British government U-turn on an inquiry into the state killing of Pat Finucane.
He said: “The unionist parties are incapable of negotiating in the run-up to elections or the summer marching period, leaving only a few weeks a year for any serious talks.
“Meanwhile both Dublin and London – especially the current British government – are failing to engage, removing the only really effective pressure on the unionist parties.”
Murphy said the unionists had sabotaged and then walked away from the last set-piece talks, chaired by US diplomat Richard Haass, and while Sinn Féin, the SDLP, the Alliance Party and the Dublin government had endorsed Haas’s proposals, neither the British government nor the Labour Party had followed suit.
He also said Sinn Féin was “almost alone” in its strong opposition the coalition’s attack on benefits in the North. “The SDLP are effective cheerleaders for austerity, and there is a lack of support for Sinn Féin’s position both on the left in Britain and in the North, including from the trade unions.”
When one member of the audience noted that the elections in France and Germany had gained far more British media attention than those in Ireland, Conway-Walsh responded: “If Sinn Féin had done badly, you would have seen a lot more coverage.”
Posted by london communists at 10:40 pm No comments:

ITALIAN, Greek and British comrades came together on London’s South Bank last weekend for the Festa Comunista, organised by members of the Italian Partito Comunista living in Britain. In addition to lively and jovial debates, the comrades discussed the political situation and communist movements in Italy, Europe and Britain, and solidarity work with Democratic Korea.
The British wing of the new Italian communist party that was formed last year is named after Pietro Secchia, a leading Italian communist who was imprisoned by the fascist regime in 1931.
Freed by the partisans in 1943 following the collapse of the Mussolini regime, he became a guerrilla leader in the struggle against the Nazi occupation and the fascist forces still loyal to Mussolini. After the war Secchia entered the Italian parliament while secretly maintaining a group of former partisans who kept their weapons in case of a right-wing coup.
Secchia was increasingly side-lined by the revisionist Italian communist leadership from the 1950s onwards but he continued to support national liberation struggles and upheld the Marxist-Leninist line until his death in 1973.

Posted by london communists at 4:25 pm No comments:

Democratic Korea – a beacon of progress

FRIENDS of Korea met at the John Buckle Centre in south London on Monday to celebrate the 50th anniversary of the commencement of Kim Jong Il’s work at the Central Committee of the WPK on 19th June 1964 and hear a top DPRK diplomat talk about the Korean leader’s revolutionary work in the service of the Korean people.
The meeting opened with the screening of a new documentary about the Korean People’s Army. NCP leader Andy Brooks then opened the formal part of the celebrations which started with talks from Thae Yongho from the London embassy of the DPRK and Michael Chant from the RCPB (ML).
Comrade Thae opened on the vital role of Kim Jong Il in developing Songun politics and the Juché idea, starting at a time when Khrushchov had not long made his 20th Congress attack on Stalin and communists throughout the world were in turmoil. Michael talked about Kim Jong Il’s immense contribution to the struggle and the building of a human-centred socialist society that shines like a red beacon of progress in Asia and throughout the world.
Great leader Kim Il Sung, who developed Korean-style socialism and the Juché Idea,
said that working people could only become genuinely emancipated if they stood on their own feet. In the western world Juché is simply described as “self-reliance” but it is much more than that.
Juché elevates the philosophical principles of Marxism-Leninism as well as its economic theories and focuses on the development of each individual worker, who can only be truly free as part of the collective will of the masses. Kim Jong Il followed in his footsteps to lead the Workers’ Party of Korea to further victories in overcoming the natural disasters that wracked the country in the 1990s, breaking the imperialist economic and diplomatic blockade and pioneering the scientific and technical advance that has guaranteed the defence of the modern people’s government in the north of the divided country.
And today young leader Kim Jong Un is following the footsteps of those who have gone before him to build a better tomorrow for the Korean people in the DPRK
This sparked off a lively discussion amongst the other comrades about the meaning and relevance of the Juché idea in the modern era which naturally overflowed during the buffet which included Korean sushi and kimchi.
The meeting was organised by the Co-ordinating Committee of the Friends of Korea, which brings together all the major movements active in Korean friendship and solidarity work in Britain today.  It is chaired by Andy Brooks and the secretary is Michael Chant.
The Friends of Korea committee consists of the New Communist Party of Britain, Revolutionary Communist Party of Britain (ML), Socialist Labour Party, European Regional Society for the Study of the Juché Idea and the UK Korean Friendship Association. The committee organises meetings throughout the year in London, which are publicised by the supporting movements and on the Friends of Korea blog.

Posted by london communists at 7:56 pm No comments: 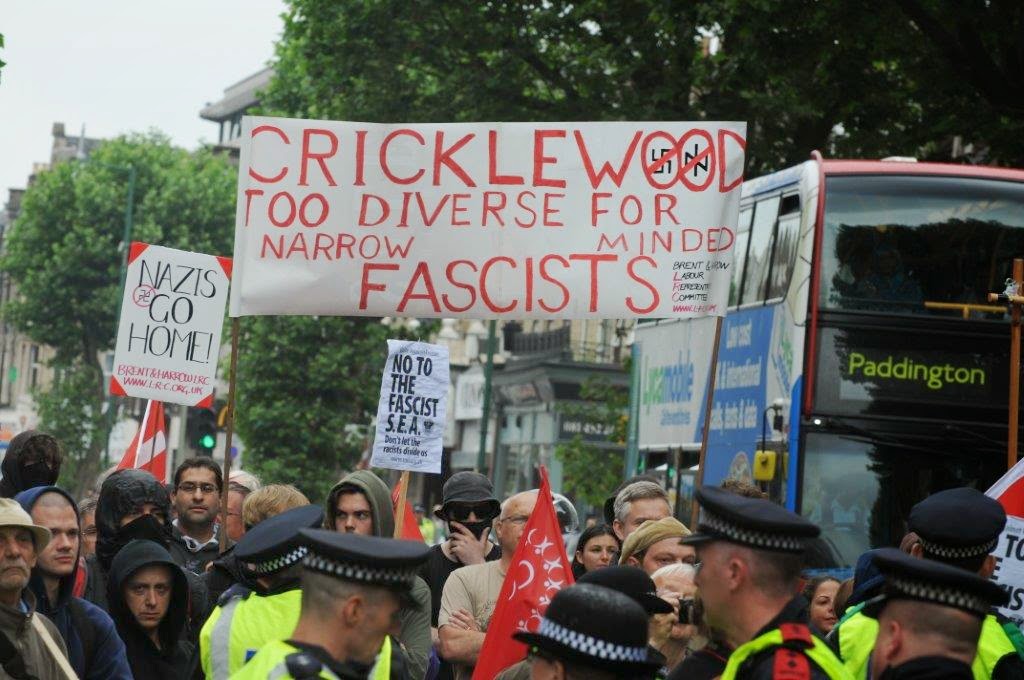 A GROUP of around 200 anti-fascists last Saturday succeeded in preventing a march by the fascist organisation, the “South East Alliance” (SEA), from marching through Cricklewood Broadway, north London.
The anti-fascists included members of Antifa, Brent Unite Against Fascism, trade unionists from the RMT and other unions, Brent Trades Council and the Labour Representation Committee.
They worked shoulder-to-shoulder, young and old together without any sectarianism to block the complete width of Cricklewood Broadway in ranks at least five deep.
And when the SEA – a splinter that broke from the English Defence League because they did not find it fascist and racist enough – arrived with a police escort from Kilburn station, they were unable to continue with their planned march. There were about 30 to 40 of them.
One of them, Colin McKey, brandished a homemade banner that combined Golden dawn and Blood and Honour symbols, while doing Nazi salutes and staring lovingly into a can of Carlsberg lager. He was asked to remove the banner by one of their stewards.
On arrival around 10 of them detached themselves from the main group and went off to make trouble elsewhere. It seems they seized the Brent UAF banner and filmed themselves burning it and posted the footage on U-Tube. Now they face possible charges of theft and criminal damage for this.
Notable absentees who have been regulars at SEA events included Tony Curtis, Paul Pitt’s son and Tony Crosland and the Yorkshire EDL.
Their leader Paul Pitt exploded with anger at the police failure to clear a way for them but although the police made great efforts first to persuade, then threaten and then push the anti-fascists out of the way, the anti-fascists linked arms and held their ground. There were not enough police to do any more.
Pitt challenged the police, shouting: “Arrest me! Arrest me! You’ve stitched us up again!” Police took him aside and ordered him to calm down.
After an hour of stalemate the police accompanied the SEA supporters back to Kilburn station. Around 20 of them then went on to try to picket the UAF conference at TUC headquarters in Great Russell Street.
Posted by london communists at 7:45 pm No comments: