by New Worker correspondent
FRIENDS and comrades paid their last respects to veteran communist Dolly Shaer at her funeral in Guildford last week. NCP leaders Andy Brooks, Alex Kempshall , Daphne Liddle and Dolly’s partner Ken Ruddock, joined Dolly’s extended family, friends and former colleagues in a celebration of her long and active life that was dedicated to the struggle for peace and socialism from beginning to end.
The NCP will be holding a memorial meeting in London to commemorate the life of Dolly later in the year.

Posted by london communists at 4:37 pm No comments:

Email ThisBlogThis!Share to TwitterShare to FacebookShare to Pinterest
Labels: NCPB

It was a hot summer evening but that didn’t deter comrades and friends from  joining  New Communist Party leader Andy Brooks and Party Chair Alex Kempshall  in celebrating the 36th  anniversary of the foundation of the  NCP last Saturday at the Party Centre in London.
Honoured guests included Hyong Hak Bong, the London ambassador of the Democratic People’s Republic of Korea and Dermot Hudson from the UK Korean Friendship Association who both paid tribute to the NCP’s consistent solidarity with Democratic Korea and its principled support for the communist ideal during the formal part of the proceedings.
Some friends, like our comrades in the RCPB (ML) and the SLP, were absent as they were taking part in the great Durham Miners Gala, but their solidarity messages stressed the warm bonds of friendship that have been forged  through joint solidarity work  over the years.
Everyone paused for a few moments of remembrance at the sad loss of veteran comrade Dolly Shaer, the NCP National Treasurer who passed away in July and everyone who spoke paid tribute to the veteran comrade whose whole life had been dedicated to the cause of communism.
It therefore fell on Alex to make the appeal for the New Worker and call on all our friends to dig deep to kick off the new paper building fund that is now essential to guarantee the survival of our communist weekly. The comrades responded in the true spirit by raising £285 on the night

Donations to the New Worker fighting fund can be sent to:

Posted by london communists at 10:42 am No comments:

International Brigade: the struggle goes on 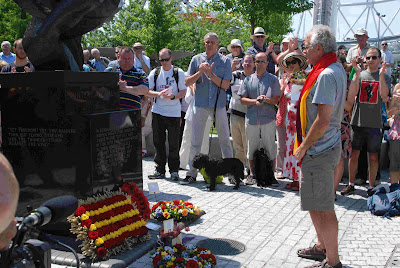 ANTI-FASCISTS in Spain, organised by the AABI International Brigades Friendship group, known as the Amigos, are fighting a major political battle to defend the existence of the memorial in Madrid’s University City to those who died fighting with the International Brigades.
And last Saturday a young Spanish campaigner made an impassioned plea for support from members and supporters of the International Brigade Memorial Trust in London at its annual memorial event in Jubilee gardens last Saturday.
She called on the crowd – several hundred strong – to support a petition to save the memorial.
Madrid’s Complutense University has been ordered to remove the memorial that was unveiled on 22nd October 2011 in the presence of four International Brigade veterans, including David Lomon from Britain.
The order was made on 3rd June 2013 by a Madrid court, the Tribunal Superior de Justicia, on the grounds that the monument had been erected by the university without planning permission. The university is reported to be insisting that it applied for the permission but did not receive a reply from the city council.
But the call for its removal came from Spanish fascists, who still exert a powerful influence in that country.
The IBMT donated €500  towards the cost of the memorial. Several other International Brigade associations also contributed to the financial appeal launched by the AABI, as did the Madrid embassies of Argentina, Canada, Cyprus, Norway, Russia, Serbia and Slovenia.
The court’s decision was greeted with dismay by the AABI activists, who noted that, although the ruling was made on technical grounds, the original complaint was lodged by a lawyer with known far-right connections. They also point out that Franco's Arco de la Victoria (Victory Arch) still stands at the entrance to the University City.
In a letter to the Spanish ambassador in London, Frederico Trillo, IBMT Secretary Jim Jump said the decision would be interpreted by many people as evidence that there were institutions in Spain that had still not come to terms with the country’s recent history.
“For a Spanish court to be seen to be acting in a way that denigrates the memory of those who fought in Spain against European fascism and on the side of a democratic government is highly damaging to the image of Spain in the outside world,” he added.
The petition form, which can be reached on http://www.change.org/es/peticiones/paremos-la-retirada-del-monumento-a-las-brigadas-internacionales-de-la-ucm>?, is hosted by @change.org . It is in Spanish but this can be changed by scrolling down to the foot of the page and
There ceremony last Saturday was very poignant – since the previous year’s event the last two survivors living in England – David Lomon and Lou Kenton – had died, as had Mike Jones, son of brigader and trade union leader Jack Jones.
And one of the leading initiators and organisers of the IBMT – who also happens to have been the New Communist Party’s own much loved and respected Dolly Shaer – had also died just five days before the event. Jim Jump read out a moving tribute to her and her work for the IBMT.
Other speakers included Rodney Bickerstaffe, Bob Whelan of the train drivers’ union Aslef and the sons of Lou Kenton and David Lomon.
Wreathes were laid at the memorial by representatives of many organisations and trade unions.
Music was provided by a choir from Catalonia and from folk singer Grace Petrie, who led the crowd in singing the Brigaders’ song Jarama. She also played a couple of her own compositions, upbeat and loud: “I still have faith in the common man, who is doing what he can…”
The ceremony finished with the mass singing of the Internationale.
Posted by london communists at 3:35 pm No comments:

by Theo Russell
SENIOR Labour backbencher and former Labour Cabinet Minister Peter Hain is leading a cross-party group of MPs backing a motion barring any lethal support to anti-government forces in Syria “without the explicit prior consent of parliament”.
The motion, in the names of Hain and Tory MP John Baron, reflects mounting opposition to Cameron’s Syria policy amongst Tory and Lib-Dem backbenchers, and has the support of former Liberal Democrat leader Sir Menzies Campbell,
Hain has also told Foreign Secretary William Hague it should be made "crystal clear" that any other actions short of arming the rebels, such as a no-fly zone or providing training, should also be subject to a vote by Parliament.
Speaking at a Stop the War Coalition meeting in the House of Commons last week, Hain savaged the Government’s aggressive Syria policy and said: “Current UK and US policy is failing on a truly monumental scale, with horrific consequences.
“Libya is hardly a good advertisement for supporting the same recipe in Syria. If getting rid of Assad is set as a precondition for negotiations it means the fighting and bloodshed will never end. The Northern Ireland peace process shows conclusively that if you set preconditions then talks will never get off the ground.
“Their good-guy-versus-bad-guy prism is hardly made convincing by the increasingly dominant role of Al Qaeda elements among the forces they are supporting. If the regime is toppled without a settlement in place it will in my view descend into chaos.”
Hain also predicted that “you will not get a settlement unless you engage with Russia and Iran, whatever opinion you have of them,” and said any transition in Syria has to be negotiated.
“All state employees must be allowed to keep their posts in order to avoid Iraq-style chaos, and a government of national unity could prepare Syria for elections,” he said.
Fellow Labour MP and veteran peace campaigner Jeremy Corbyn urged activists to contact their own MPs and ask them to support  the motion.
Lindsay German, convenor of the Stop the War Coalition, warned: “The only alternative to negotiations is a much bigger Middle Eastern war, and the Lebanon will definitely be a casualty in that war. My theory is that we are moving towards a wider Middle Eastern conflict.”
She also pointed out that under the Lisbon Treaty member states are required to allocate a certain proportion of spending to defence.
Iraqi peace activist Sami Ramadani pointed out that the current strategy of the West and Qatar is “to move in wherever democratic movements become too difficult to control, relying on the most reactionary elements.
“The West intervenes at every stage to prevent the development of democratic movements which have national independence as their goal. The Arab governments fear democratic movements and instead of supporting them they are undermining them.”
The Government has already been warned by the Commons Speaker John Bercow that it would be "undemocratic and inappropriate" for any weapons to be delivered to Syria without Parliament’s consent.
It already looks certain that the Government would lose a Commons vote on the issue as Labour and the Lib Dems already oppose military intervention. Hague has promised a vote before any arms shipments, but MPs fear being “bounced” into a decision. As John Baron put it: "This debate is about putting a marker in the sand."
Opposition to arming the rebels has also come from Boris Johnson, Norman Tebbit, deputy premier Nick Clegg, former army chief Lord Dannatt, and the Archbishop of York, Dr John Sentamu. Whatever happens in the Commons this week, it is increasingly obvious that the wheels have completely fallen off Cameron and Hague’s aggressive, imperialist Syrian policy.
Posted by london communists at 3:13 pm No comments:

KIM IL SUNG was the greatest Korean who has ever lived and an outstanding communist revolutionary and thinker. That was how NCP leader Andy Brooks put it at a reception held last Sunday at the HQ of the RCPB (ML) to mark the 19th anniversary of the passing of President Kim Il Sung and the 50th anniversary of the Korean people’s victory in the Korean War.
The reception at the John Buckle Centre in south London was hosted by the Preparatory Committee (Britain) to celebrate the Korean People’s Victory in the Korean War and was an initiative of the long-standing Friends of Korea committee.
The guest of honour was Hyon Hak Bong, Ambassador at the Embassy of the DPRK, who made a short presentation outlining the current situation of the Korean peninsula. Other speakers included Michael Chant of the RCPB (ML) who chaired the formal part of the event, together with  Andy Brooks, Dermot Hudson of the UK Korean Friendship Association and John McLeod from the Socialist Labour Party (SLP).
Other friends and comrades, including SLP President Andrew Jordan, used the opportunity to get first-hand information on Democratic Korea from the Korean comrades over drinks and Korean food which came later.

Dolly CC in memoriam with PIC

(same text as London blog)
Posted by london communists at 2:56 pm No comments: