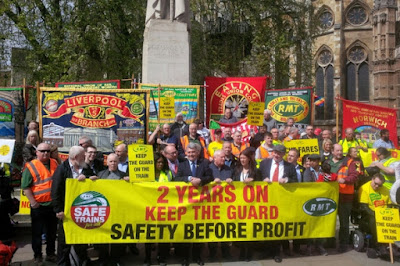 THE RAIL union RMT held a national protest against Driver Only Operation outside Parliament on Wednesday 25th April, to coincide with the second anniversary of the start of RMT strike action on Southern Rail – Britain's longest running industrial dispute – against Driver-Only Operation (DOO) and in defence of keeping the guard on the train.
Since the initial dispute began on Southern, RMT members on Northern, Merseyrail, Greater Anglia and South Western Railways have also taken strike action in opposition to the assault on jobs, safety, security and accessibility.
After the protest a meeting was held in the Houses of Parliament with a number of guest speakers.
Before the event RMT, general secretary Mick Cash said: “The sheer grit and determination of our members on Southern, Northern, Merseyrail, Greater Anglia and South Western Railways to put public safety before private profit over the past two years is a credit to the trade union movement and the communities they are standing up for.
“We will be demonstrating outside Parliament to show that we are as determined now as we were two years ago – when the first dispute started – to defend the role of the guard on the train and the basic principles of passenger safety and accessibility.
“RMT has successfully secured agreements in both Wales and Scotland that lock-in the guard guarantee and if it’s good enough for Wales and Scotland to put safety and the role of the guard centre stage then it should be good enough for the rest of Britain as well.”
Posted by london communists at 2:20 pm No comments:

THE FAR-RIGHT group, Generation Identity (GI), which promotes a new version of eugenics, planned to hold a “European conference” in London last Saturday. Details of the venue were kept secret until the last minute to try to foil anti-fascist protests.
Their problems began on Friday when two of the main speakers, Martin Sellner, an Austrian activist, student and the leader of the "New Right" Identitarian Movement of Austria and part of the alt-right movement, and Hungarian activist Abel Bodi Rex, were detained at Stanstead airport and barred from entering Britain.
On Saturday anti-fascists were monitoring venues and tube stations across London. Through the help of trade unionists from the RMT union, various places thought likely to be used by GI were under watch. News came through in the early afternoon that GI were in the Stage Community Arts Centre in Sevenoaks, Kent.
A quick phone call to the trustees of the Stag Community Arts Centre led to the well-heeled young members of GI being turned out by the management just as anti-fascists from London arrived to join local anti-fascists in Sevenoaks.
Ex-Britain First thugs providing security for GI tried to throw their weight around in their displeasure but were rebuffed. Disgruntled far-right individuals took to YouTube to whinge about supposed anti-fascist attacks on free speech.
Scuffles in the car park ensued and were broken up by police as the members of GI wandered around trying to find a new venue, or even somewhere they could get a drink; they found themselves barred from all the pubs in town. The Stag Community Centre people had put the word around.
Sellner was central to the far-right “Defend Europe” campaign last summer, which tried to stop boats attempting to rescue migrants in the Mediterranean. His mission ended in failure – ironically, after getting into distress off the coast of Libya, Sellner and others were saved by a refugee rescue boat.
Despite GI's hype and internet promotions, they attracted fewer than 60 to their “conference”. Overnight, some who had paid the nearly £50 attendance fee complained to GI that they had not received confirmation of conference details. The live feed of GI’s day periodically failed and has few followers.
Overall the day was a disaster for the racists and a success for anti-fascists.
Meanwhile John Meighan, founder of the Football Lads Alliance (FLA), has left the FLA and handed over the leadership of the group to a ‘new Admin team’.
Anti-racists’ activity has clearly played a role bringing pressure on Meighan and the FLA over recent months that has revealed their real agenda.
But they warn that nobody should believe that the threat the FLA poses has weakened or disappeared. If anything, John Meighan’s departure could smooth the tensions that have led to splits and arguments amongst the FLA’s supporters.
Recent articles in the Observer and Times newspapers have exposed the racism at the heart of the FLA project.
The FLA’s turnout on its recent Birmingham march was also a factor in Meighan’s departure. Originally the mobilisation was flagged up as a 20,000-strong protest but in reality they mobilised around 1,500.
This led to increasing criticisms of Meighan’s leadership of the ‘movement’. He also faced accusations of financial mismanagement of funds.
The FLA has moved sharply rightwards since its initial mobilisation in London last summer in the wake of a wave of terror attacks. It initially claimed to be against all extremism, and to be neither of the left nor the right.
But it has moved in an increasingly Islamophobic and racist direction. Posts on the FLA’s secret Facebook wall have included horrible racism and Islamophobia, and violent threats against Jeremy Corbyn, Diane Abbott and the Mayor of London, Sadiq Khan.
The FLA has been attracting far-right elements, and increasingly John Meighan offered his support to far-right figures and mobilisations.
Posted by london communists at 11:26 pm No comments:

Down with the Kiev fascist regime

New Communist Party (NCP) leader Andy Brooks joined other anti-fascist campaigners demonstrating outside the Ukrainian embassy in London last weekend. The picket, called by the NCP, Socialist Fight and the British Posadists, was part of an international peace protest called by the Donetsk communist party to mark the anniversary of the beginning of the fascist offensive on 14th April 2014 that started the civil war and the armed resistance that established the people’s republics in what was once eastern Ukraine. The protest was also supported by members of the London branch of Partido Communista from Italy and other progressive forces.
British imperialism gives military and financial support to the illegal regime in Ukraine, which is propped up by fascist militias that idolise Stepan Bandera, a Second World War Nazi collaborator whose followers massacred Jews and Poles during the German occupation. They later became a willing tool of the CIA to spread terror across Soviet Ukraine and People’s Poland during the Cold War.
A resolution from the Communist Party of Donetsk was read out and Andy Brooks was interviewed by Sputnik International for a report that was published on Monday.

Posted by london communists at 10:41 pm No comments:

MORE THAN a third of London’s migrant European Union construction workers have not been paid for work while 33 per cent have experienced verbal or physical abuse, according to new research.
A survey of non-British EU nationals working in the capital’s construction industry by anti-trafficking group Focus on Labour Exploitation (Flex) found that 36 per cent had experienced not being paid for work they had done.
The research, carried out for a report on London’s construction industry by the organisation, found that half the workers (50 per cent) did not have a written contract and that more than half had been made to work in dangerous conditions (53 per cent).
Data was gathered from a range of workers on different sites from large-scale developments to smaller home improvement jobs.
One respondent to the survey – a day labourer named Darius – said he was made to carry out dangerous tasks at the risk of losing his job.
“They just tied a cable around my waist, and the guy on the roof had another cable around his waist and this is how we did things,” he said.
“I had to do it, otherwise they sent me home. If I said I didn’t want to do it, they would say, ‘Go home, we’ll find another’. And I didn’t have a contract.”
Flex said more money needed to be made available to labour inspection authorities for inspections in the construction sector to combat the issues raised in its report.
The organisation also suggested that a licensing model be established to monitor labour providers and ensure workers within the supply chain were treated fairly.
Flex director Caroline Robinson said: “It is shocking that so many of the people building our homes and offices have not been paid for their work, faced abuse or had to work in dangerous conditions – these are the conditions pushing people into exploitation.
“Unscrupulous employers are getting away with abuse because people are unable or too scared to raise complaints.”
An ONS (Office of National Statistics) survey in 2016 found 54 per cent of London construction workforce were migrant workers.
Last year the giant union Unite revealed that the number of Health and Safety Executive inspectors had been cut by 25 per cent since 2010.
Figures obtained by Unite, via a Freedom of Information request, showed that in 2010 there were 1,311 frontline inspectors by 31 December 2016 that number had reduced to just 980.
Posted by london communists at 7:04 pm No comments: