MORE than 100 local residents and anti-fascists turned out at short notice to bar the progress of a short march by a tiny but toxic group of hard core Nazis in Clapton, East London, on  Saturday 18th April. Former National Front leader Martin Webster was among them.
The Nazi march was organised by Eddie Stampton, a man recently photographed by New Worker journalists brandishing a large swastika flag in Whitehall. 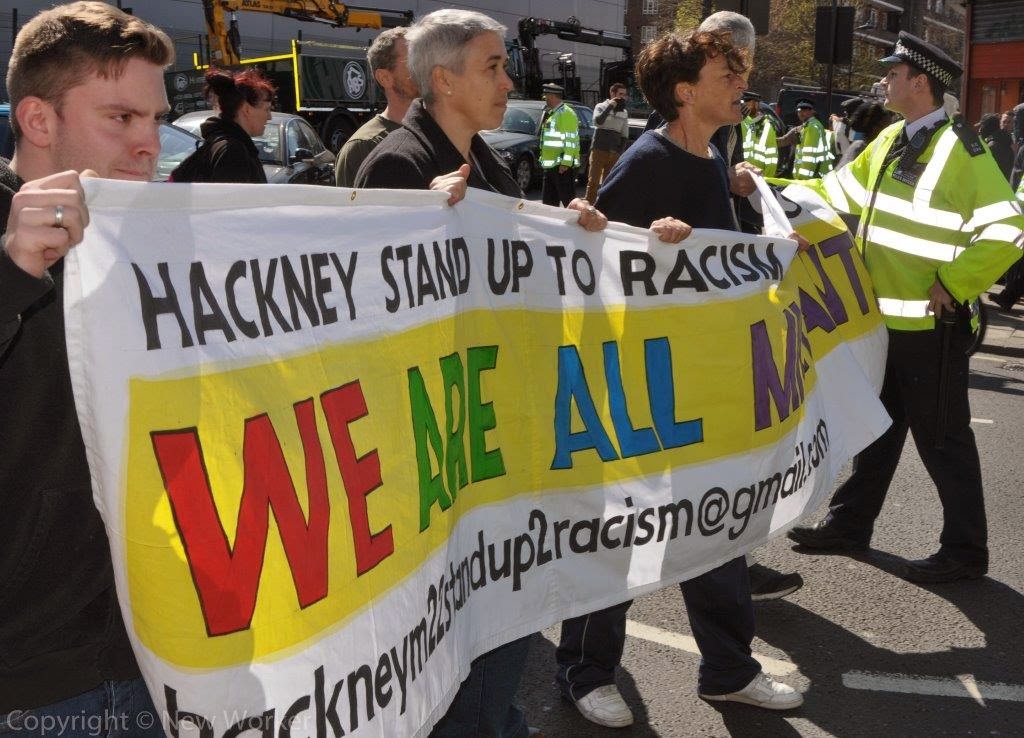 He had invited a collection of individuals from an assortment of fascist and racist groups: Britain First, the British National Party, the National Front, the English Defence League and others. But altogether they numbered just 22.
They claimed to be marching in protest at the local Jewish community in Stamford Hill being allowed their own “police force” – mainly to protect the community from anti-Semitic attacks from the friends and associates of Messrs Stampton and Webster.
Stampton had wanted his rally in a park in Stamford Hill right in the middle of the local Jewish community but police redirected their march from Clapton station in the opposite direction to a corner beside the Lea Bridge Roundabout.
The walk was only a couple of hundred metres but it was long and slow as energetic and noisy young anti-fascists blocked the way and had to be forced back inch by inch by police while the Nazis were surround by scores of police to protect them from angry local residents.
Martin Webster launched a vitriolic attack on Jewish community defence organisations – while standing almost on the spot where, in the 1960s, a synagogue was destroyed by arson perpetrated by members of the Greater Britain Movement – of which Martin Webster and his colleague John Tyndall were members at the time.
A group of six Polish fascists invited by Stampton arrived just as the Nazi meeting was finishing.
Posted by london communists at 9:46 pm No comments:

Email ThisBlogThis!Share to TwitterShare to FacebookShare to Pinterest
Labels: anti-fascism 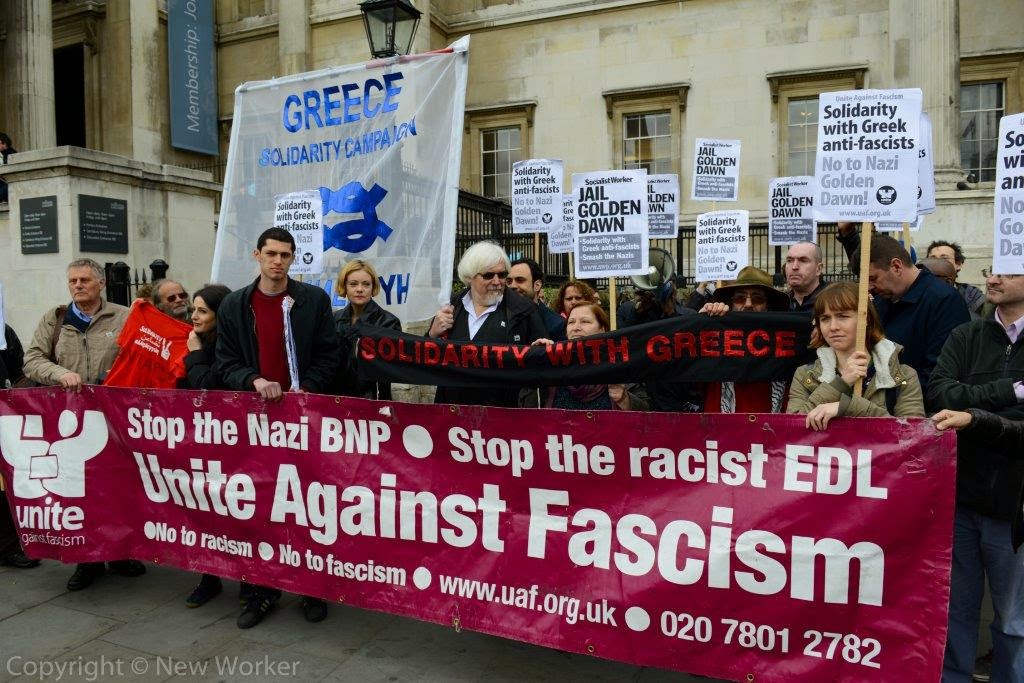 AROUND 100 anti-fascists assembled in Front of the National Gallery in Trafalgar Square on Sunday 19th April to send a message of solidarity to anti-fascists in Greece fighting the Nazi Golden Dawn movement.
The event was on the day before up to 70 members of Golden Dawn were to be tried in a Greek court on charges relating to their criminal activities.
Golden Dawn, like other fascist parties, has an electoral wing trying to win votes and a street fighting wing attacking and trying to intimidate communists, socialists, trade unionists and immigrants.
It has 17 MPs, despite an unashamedly hard-core Nazi image and swastika style party logo. Its street thugs are murderous.
The trial, which began on Monday in Athens, comes after massive mobilisations by antifascists in protest at the murder of antifascist hip hop artist Pavlos Fyssas. The killing was the latest of a string of horrific attacks linked to the fascist party, including the racist murder of Shehzad Luqman and an attack on the militant PAME trade union front.
The rally in Trafalgar Square on Sunday was organised jointly by Unite Against Fascism, Anti-Fascist Action for Greece, the Greek Solidarity Campaign, and the Greek antifascist organisation KEERFA.
UAF joint general secretary Weyman Bennett read out a solidarity message to be sent to anti-fascists in Greece: “We send solidarity from London to antifascists in Greece who have campaigned against Golden Dawn. We hope to see its leaders jailed next week. This is not just an important matter for people in Greece, but for all over Europe.
“Over the past few years we have seen the rise of Golden Dawn in Greece, and also of the fascist Front National in France. Other racist and fascist organisations across the continent have taken encouragement from their gains.
“It is important in Greece, in Britain and elsewhere to organise against these racist and fascist groups. They are trying to feed off austerity, to create hatred and division.
“In Greece, we have seen the murderous results of the fascists’ successes. We congratulate antifascists in Greece on the long campaign that has brought about next week’s trial but we must all stay vigilant and continue to oppose the fascists whenever and wherever they try to organise.”
There were speeches in English and Greek, and everyone joined in a chant of “poteh xana fasismosa” meaning “fascism, never again!”
Posted by london communists at 9:35 pm No comments:

The Day of the Sun in London 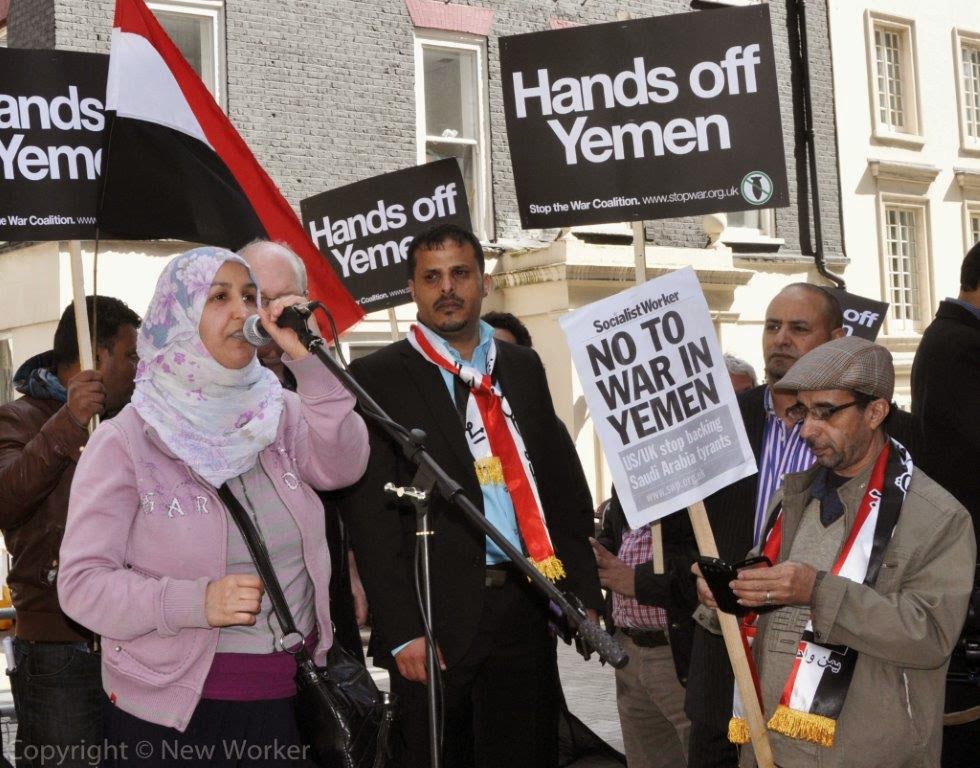 AROUND 100 people gathered in Curzon Street, London, opposite the Saudi Arabian embassy, to protest at Saudi Arabia’ bombing of Yemen, resulting in deaths and horrific injuries to hundreds of innocent men, women and children.
The rally, on Saturday 11th April, included many Yemeni nationals who condemned the Saudis loudly and the imperialist leaders behind Saudi Arabia’s unprovoked and aggressive action. They also attacked United Nations general secretary Ban Ki Moon for his failure to condemn the attacks.
Speakers at the rally included Andrew Murray and John Rees from Stop the War, Maz Saleem and STW student organiser Shadia Edwards-Dashti
The Saudi-led attack on Yemen has killed more than 540 people, of which at least 74 are children, and has left 1,700 wounded.
Supported and directed by the United States, using arms supplied by Britain, Saudi Arabia is waging a war that can bring nothing but more death and destruction for the people of Yemen.
The main message from Stop the War was that Saudi Arabia has no business intervening in internal differences within Yemen – the Yemenis must be allowed to resolve these differences themselves.
John Rees said: “The United States and Britain are up to their ears in this.” He went on to say that Saudi Arabia is Britain’s number one customer for weapons and that is ever a deal is in doubt, one of the royal family is sent to ease it through.
He said that the bombs, drones and guns that are raining death and terror on innocent Yemenis are falling with the blessing of the British government and were supplied by British arms companies.
The US has a central role in all of this. As US officials told the Wall Street Journal: “American military planners are using live intelligence feeds from surveillance flights over Yemen to help Saudi Arabia decide what and where to bomb.”
And Yemen has for a long time suffered repeated drone strikes from the US, killing innocent civilians.
Maz Saleem told the rally that western-backed attacks on Arab countries add to Islamophobia in this country. Her father, aged 82, was stabbed and murdered by a fascist terrorist two years ago while walking home from his local mosque simply because he was a Muslim.
Posted by london communists at 12:32 pm No comments:

Racists outnumbered in London and Oxford 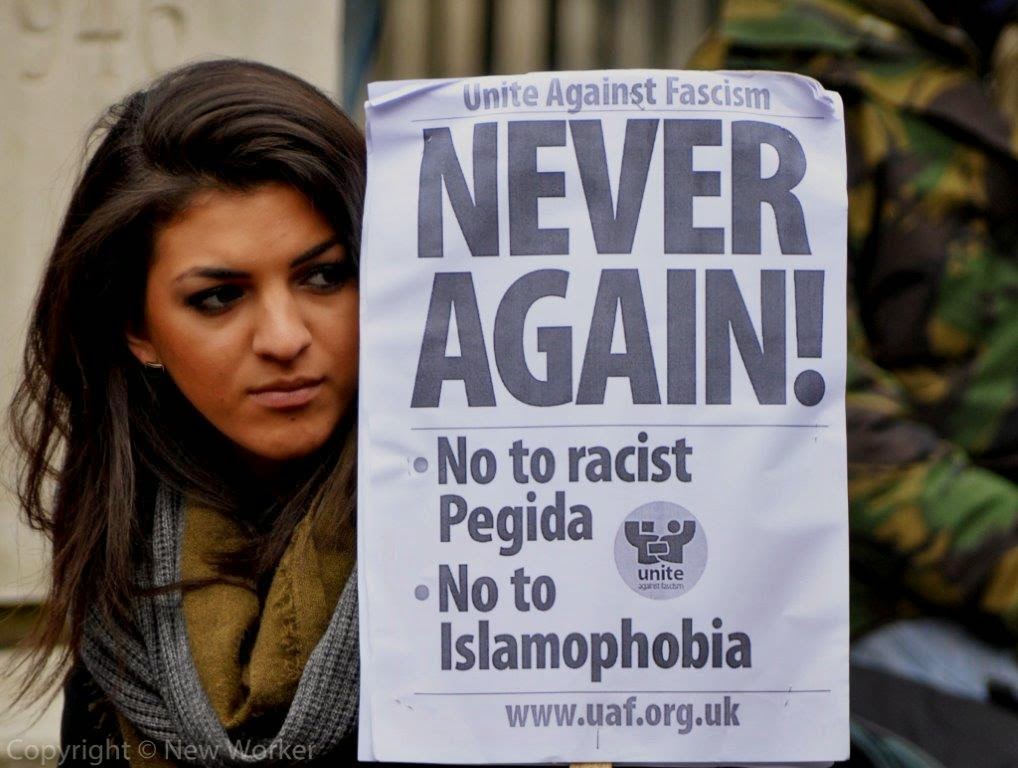 THE GERMAN based Islamophobic organisation Pegida joined forces with English racists and fascists held a small static rally in Whitehall, London, while the English Defence League staged a march in Oxford attended by just over 100 supporters.
In both cases the racists were well outnumbered by around 300 anti-fascists.
In London a handful of Pegida supporters and friends assembled behind a banner while about 100 metres away around 100 supporters of Unite Against Fascism assembled with banners, placards, and literature stalls.
The Pegida group were joined by a group of Nepalese Ghurkhas. This rally had been organised for four o’clock, some said in the hope that some of the Oxford EDL supporters could get back to London to cover both events. But weekend rail repairs put an end to that plan.
But the Pegida event did swell a little when a group of serious hard core English Nazis, including Eddie Stampton, left their pub and arrived pursued by around 200 young Anti-Fascist Action members who exploded noisily into Whitehall and made some serious efforts to breach the police lines that separated fascists from anti-fascists.
These young anti-fascists had been waiting for a couple of hours in Trafalgar Square and indulging in a pillow fight to pass the time.
Police were forced to close Whitehall to traffic completely for a long time as they struggled to keep the fascists and anti-fascists apart.
So far Pegida attempts to raise support in Britain have been pathetic failures, with just four of their supporters turning up to one planned even in Edinburgh last month.
Meanwhile in Oxford more than 300 anti-fascists mostly locals and supported by the Oxford Students’ Union and local trade unions, came out to oppose the EDL march.
There were some scuffles as some EDL supporters tried to attack the anti-fascists. One police officer was slightly injured by a flying missile and there were two arrests.
Posted by london communists at 11:32 am No comments: