Action on homelessness in London 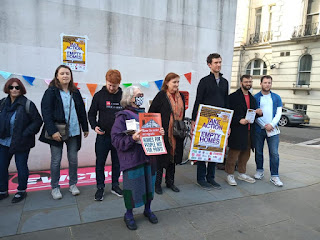 by New Worker correspondentKensington campaigners were out on the streets of West London last weekend protesting outside a monstrous luxury development where the vast majority of flats remain empty six years after its completion.
Labour councillor and former MP for Kensington, Emma Dent Coad, joined the demo and spoke passionately against the obscenity of having empty homes when we have people living in appalling temporary accommodation.
The picketers were taking part in a National Day of Action on 9th October organised by the Campaign Against Empty Homes, calling for community and government action on the growing number of empty homes in the country. The Day was also to raise public awareness of the rising number of long-term empty homes and homes without a permanent resident in England. Government and market data show there are around 270,000 long-term empty homes, 260,000 second-homes with no permanent resident, and 120,000 Airbnb-type short-lets.
The Campaign is a coalition of organisations dedicated to ensuring wasted empty homes are brought into use and that new homes are built to meet local needs first. It is backed by the Big Issue magazine, Homes for All, Action on Empty Homes, and Unite’s London and South East regions.
Over 100,000 families are living in temporary accommodation whilst over half a million homes have no permanent resident. Communities are being broken-up as council estates that could be refurbished are being left to decline, to be replaced by yet more unaffordable new blocks.
The climate change crisis demands refurbishment, not demolition. Retrofitting 270,000 long-term empty homes and council estates can help solve the climate crisis.
Instead, the wrong kind of housing continues to be built across the country – they are unaffordable to anyone on an average income to either rent or buy. These new builds are also being sold off-plan and ending up as Airbnb short-lets, second homes or buy to leave empty wealth investments, with no permanent residents.
Posted by london communists at 1:42 pm No comments:

Solidarity with Korea in London 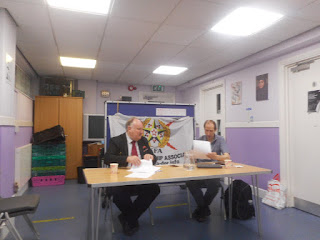 by New Worker correspondentLondon comrades returned to the Chadswell Centre in Euston to celebrate the 76th anniversary of the foundation of the Workers Party of Korea (WPK) at a meeting called by the Korean Friendship Association last weekend. Chaired by Dermot Hudson, the meeting heard a variety of speakers, including NCP London Organiser Theo Russell, talk about the achievements of the Korean revolution over the years.
Dermot Hudson pointed out that the Democratic People’s Republic of Korea (DPRK) is the only country in the world without a single death or indeed a single case of COVID‑19, and Theo Russell drew attention to the role played by the WPK in rallying the socialist and communist forces after the counter-revolutionary wave that swept away the Soviet Union and the people’s democracies of eastern Europe.
The DPRK Embassy in London sent a paper to the meeting that stressed the leadership of the WPK general secretary Kim Jong Un and the role of the WPK in raising living standards, which was followed by a general discussion about the current situation and future solidarity work.
Posted by london communists at 10:39

They did not pass! 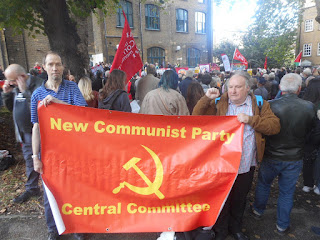 Comrades were out on Sunday to mark the day the fascists were stopped in their tracks in London. On 4th October 1936 hundreds of thousands of workers took to the streets to stop Sir Oswald Mosley’s Blackshirts marching through the Jewish quarter in the East End of London. And last Sunday former Labour leader Jeremy Corbyn paid tribute to those who put up barricades and battled with the police to stop Mosley’s thugs in what soon became known as the “Battle of Cable Street”.
The Communist Party played a major part in the mobilisation along with the Independent Labour Party and the Jewish Ex-Servicemen's Association. On the eve of the Mosley march the Daily Worker warned that "the fascists are pouring out unimaginable filth against the Jews. The attack on the Jews has been the well-known device of every bloodthirsty, reactionary, unpopular regime for centuries". The issue was "not merely a question of elementary human rights…the attack on the Jews is the beginning of the attack to wipe out the socialist movement, trade unionism and democracy in Britain".
On the day, the Blackshirts and thousands of police were met by a hostile crowd who had erected barricades to stop the fascists marching. After hours of clashes with the police and many arrests, the police told Mosley the march would have to be abandoned.
On Sunday, at the rally just off Cable Street, Corbyn told the crowds that, despite Mosley’s attempt to use anti-Semitism to divide the working class, something “totally remarkable” happened on that day in 1936. “The Jewish community and the Irish community came together to say: ‘they shall not pass’.”
This was echoed by the local Labour MP, Apsana Begum, who called it an “incredible triumph of humanity, a victory of people’s power”, whilst warning that hate speech was on the rise again in Britain and around the world.

Posted by london communists at 9:59 pm No comments:

Against the cuts in Euston 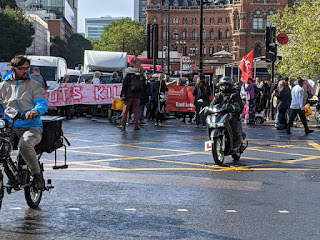 Disabled People Against Cuts (DPAC) campaigners took to the streets of London this week to protest against the government’s removal of the £20 per week uplift to Universal Credit and to demand a fundamental overhaul of the social security system.
They blocked The Euston Road in central London for over half an hour on Tuesday in an “AudioRiot” of drums, bells, whistles and loudhailers as part of their national campaign to mark the end of COVID‑19-related support mechanisms in Universal Credit.
The government increased Universal Credit by £20 per week at the start of the pandemic. They never gave it to people on legacy benefits – meaning that more than two million disabled people and carers missed out. The uplift was also temporary and ends on 30th September.
Senior Tories, including six former Secretaries of State for Work and Pensions, have pleaded with the government not to end the uplift yet. Iain Duncan Smith and Damian Green even made a last-ditch attempt to get a motion to stop the cut voted on through the Pensions uprating debate, but their amendment was not chosen by the Speaker.
Many claimants never got the £20 in the first place. It was only applied to Universal Credit, so those still on legacy benefits and not yet moved over to Universal Credit were missed out. Over three-quarters are disabled, and their living costs have been significantly higher as a result of the pandemic and needing to shield.
Out-of-work benefits are well below the amount needed for a decent standard of living. Even after the uplift, Universal Credit is just 43.4 per cent of the minimum income standard needed for a decent standard of living. For those on legacy benefits, their social security payments all the way through the pandemic have represented just 33.9 per cent of the minimum income standard.

Posted by london communists at 10:16 pm No comments: