Global warming: Are we the last generation?

On Good Friday around 15 youths – all aged under 17 years old – held a large banner with the words “Are we the last generation” on the pavement outside Heathrow airport in London. A heavy police presence stopped the teenagers from standing on the road.
“I’m Felix, I’m 14 years old. I’m doing this because when I have children I want to be able to tell them I did everything I could to protect their futures.”
“I’m Samar Faraj, I’m 14, and I’m doing this because there are things that need doing that aren’t being done, and in 30 years time, I don’t want to be looking back on this and regretting not doing everything I could do to help prevent the disasters we’re facing.”
Extinction Rebellion Youth is a network for everyone born after 1990: “We are a generation that have never known a stable climate and that will be defined by how the world responds to the climate and ecological crisis.”
“I’m Mia, I’m 13. I’m doing this because something has to change, I’m being told to make decisions about my future when it can’t even be guaranteed the Earth has one.”
“I’m Maya Rivett-Martinez, I’m 15, and the constant fear for my future is what gives me the need for change.”
The campaigning teenagers at London airport were part of the wave of climate change protests that paralysed parts of central London last week in demonstrations called by the Extinction Rebellion movement to attract attention to the ecological catastrophe they believe is imminent if nothing is done to halt it.
The global aviation industry produces two per cent of all human-induced carbon dioxide emissions. If global aviation was a country, it would rank in the top 10 emitters. Unfortunately, the emissions from this industry continue to increase at a truly alarming rate. Parliament has approved a policy for airport expansion. The Government is moving in completely the wrong direction.
Last week the godfather of climate science Dr James Hansen, the American space scientist who first alerted the world to the dangers of climate change more than 30 years ago, sent an open letter to the British people: “I write in recognition that citizens throughout the UK, led increasingly by the young – those who stand to lose most – now are rising to demand that national leaders develop and adhere to a viable path away from calamitous global warming.”
To every parent, and every grandparent, “I urge you in particular to take a stand, so as to not let the full burden of responsibility befall our children. Arm yourself with information of the highest quality, think for yourself, and then exercise your full intellectual and moral capacity to help your nation and our planet survive.
“I have no doubt that the era of fossil fuels is drawing to a close. But questions remain as to the speed of the coming transition and, in direct consequence of that speed, the nature of what will be left in its wake. I cannot answer, in particular, whether our civilisation will survive in any recognisable form the assault on nature and the human dislocation attending loss of our planet’s great coastal cities that we of necessity will confront with continued unarrested climate change.”
In his letter Hansen sets out the truth about the ecological emergency: “The foregoing, accordingly, constitutes my best brief effort to explain our present, serious, global, climate crisis. I will have failed if, upon its review, the reader decides to shirk his or her fundamental responsibility. Now, more than before, we need to bring to bear our full acumen, time, and resources so as to demand and forge a viable future.”
This week, the words of the world’s most respected climate scientist were echoed by wild-life broadcaster and naturalist Sir David Attenborough: “If we have not taken dramatic action within the next decade we could face irreversible damage to the natural world and the collapse of our societies. What happens now and in these next few years will profoundly affect the next few thousand years.”
Posted by london communists at 2:51 pm No comments:

Tell the Truth on Climate change! 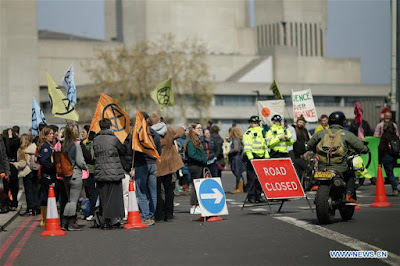 Climate change protesters disrupted transport throughout central London this week in street protests calling on the government to "tell the truth about climate change" and reduce carbon emissions to zero by 2025. Hundreds of activists have been arrested in the protests that began on Monday, organised by the Extinction Rebellion (XR) movement, aimed at shutting down the capital.
Earlier this month a group of XR supporters stripped in parliament during a Brexit debate and glued their hands to the glass of the House of Commons' public gallery to highlight the threat of climate change.
This week’s protests have caused traffic jams and grid-locks across the capital. London Underground services have been disrupted. British Transport Police say they’ve restricted passenger Wi-Fi connectivity at Tube stations in the interests of safety, and to prevent and deter "serious disruption" to the London Underground network. A senior police officer said: "Ongoing demonstrations are causing serious disruption to public transport, local businesses and Londoners who wish to go about their daily business.”
John McDonnell, Jeremy Corbyn’s No 2, tweeted his support for the activists. He said the disruptions “will be worth it” if it “moves us all a step further in tacking climate change”.
But fellow Labour member Sadiq Khan, the Mayor of London, says that although he "shared the passion" of the activists he was "extremely concerned" about plans that some of them had to disrupt the Tube.
Young activists who’ve set up tents in Waterloo Bridge, Parliament Square and Oxford Circus have put up road blocks on major roads and bridges whilst others have even glued themselves to lorries and trains to cause disruption and attract attention to the ecological catastrophe they believe is imminent if nothing is done to halt it.
Protesters targeted Shell’s London headquarters, gluing themselves to windows and smashing the glass revolving doors of the big oil corporation, and some 500,000 people were affected by the diversion of 55 bus routes as a result of the disruption on the roads.
Four climate activists even glued themselves to the fence outside Jeremy Corbyn’s house in north London. They said they were all Labour supporters but wanted the party to go much further on the issue. One of them, a 60-year-old man who walked from Stroud to take part in the London actions, said: “We are here because we are supporters of Jeremy Corbyn and he is the best hope this country has got to get us out of this. But we need system change and a transformation of our consumer economy, and we know he is a person who has the authority and power to deliver that.” Parliament is in recess and the Labour leader was apparently not at home at the time.
The protests are not just limited to London. Other demonstrations have taken place in 80 other cities around the world. In The Hague in Holland activists swamped the International Criminal Court building; and police made 29 arrests when over a thousand climate change campaigners blocked one of the main roads into Edinburgh's city centre.
The British-based ecology movement plans to go ahead around the clock with its acts of disobedience until the end of the month. “Climate breakdown and ecological collapse threaten our existence. Another world is possible, and it’s just within reach. It’s going to take everything we’ve got to get there. So we’re pulling out all the stops and rising up in a full-scale Rebellion against this twisted system to save ourselves and the natural world from extinction,” they say in a statement released this week.
Extinction Rebellion was established following a call from a number of academics and veteran ecology campaigners last year to set up a movement that embraces Gandhi-style civil disobedience to take the movement to the streets and fire a common sense of urgency to tackle climate breakdown.
Posted by london communists at 4:01 pm No comments:

NHS crisis: GPs to be packaged for sale and side-lined