Save the Whittington Hospital

THOUSANDS of people braved the cold and wet weather last Saturday in north London to take part in a protest march against plans to close the accident and emergency (A&E) unit and the maternity unit at the Whittington Hospital in Archway.
The marchers, who included doctors, nurses and other health workers as well as thousands of local residents, was accompanied by the double-decker Ham&High (Hampstead and Highgate local newspaper) bus with a big white banner draped across it.
It was a great help to many of the elderly and less mobile local residents who wanted to join the protest to defend their local hospital but would have had great difficulty with the two-mile march from Highbury Corner ending in a steep hill to the hospital in Magdala Avenue – skirting Highgate Cemetery where Karl Marx lies sleeping.
Campaigners from the Defend the Whittington Coalition shouted “no cuts, no closures” from loudspeakers on the bus as people joined in the chant from the road.
Ham&High editor-in-chief Geoff Martin, who launched the newspaper’s campaign Hands off our Whittington, also took to the loudspeaker on the top deck, chanting “hospitals are for people, not for profit” to cheers from children, parents and the elderly who had boarded the bus for the march.
Linda Peanberg King, whose seven-week-old baby son, Axel, died at the Whittington after being repeatedly turned away by the hospital’s out of hours care provider Harmoni PLC, joined the protest on the bus with her husband, Alistair, and their three-year-old son, Carl.
She said: “We have nothing but good things to say about the Whittington. Both my sons were born there, but it just so happened that one died there. They tried to do everything they could to save him; it was with Harmoni that there is a problem.
“The Whittington serves a big community and it’s a good hospital. I am against privatisation of the NHS and that is why I am campaigning.”
Angela Sinclair, 92, joined the Ham&High bus with her daughter. The former hospital social care worker, who has been going to the Whittington for more than 30 years, has been campaigning against threats to the NHS for decades.
She said: “The hospital has done this without public consultation. It’s ridiculous. You can’t do something of public interest without consultation.
“I have always had good treatment at the Whittington though nursing isn’t what it used to be – this is one example of many. The NHS is one of the most important institutions and we have to defend it.”
The health unions were out in force, including members of the GMB who are very worried about the plans to close the Accident and Emergency Service, maternity beds and elderly care beds, as they have depended on them for their lives.
George Sharkey, Islington Haringey GMB Branch Secretary said: “The hospital will cease to exist in its current form if the plans to cut 500 staff and 60 beds go ahead.
“Many of my GMB branch members are very worried about the plans to close the Accident and Emergency Service, maternity beds and elderly care beds, as they have depended on them for their lives.
“When ordinary GMB members said we need to do something to support the campaign to save the Whittington I agreed that we needed to be there to support our members and the community.  I’m proud to be marching along with other GMB members and residents in the community.”
Posted by london communists at 2:47 pm No comments: 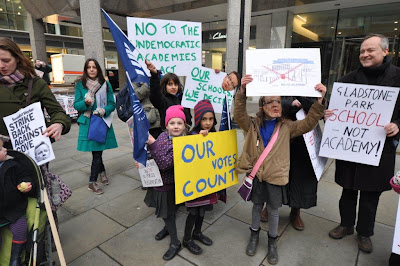 AROUND 600 teachers marched from Westminster’s Catholic Cathedral to the Department of Education last Wednesday evening in a protest called by the National Union of Teachers London region.
Many marchers wore Gove masks as they loudly demanded the removal of the Education Secretary.
They also protested to say no to pay cuts, pension attacks, the scrapping of the Education Maintenance Allowance, a very modest amount that used to be paid to fifth and sixth formers to enable them to stay in school and take A-levels.
Civil service workers from the Department of Education spoke at the rally at the end of the march and brought their solidarity. PCS members at the DfE had been on strike against job cuts in the department on 7th March.
The NUT and the PCS unions are both pushing for a general strike of public sector unions against cuts in wages, jobs, conditions, pensions and services.
Posted by london communists at 2:44 pm No comments:

No Life without ILF! 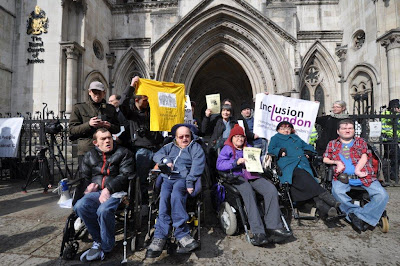 MEMBERS and supporters of the campaign group Disabled People Against Cuts (DPAC) filled the Strand in London outside the law courts to show their support for six of their comrades inside fighting test cases to defend the Independent Living Allowance (ILF).
The ILF was set up in 1988 to support disabled people with the highest levels of support need to live in the community. Since then it has helped thousands to live active and full lives.
The Government decision to close the ILF and instead devolve responsibility to local authorities follows a consultation that disabled people claim is unlawful.
Whereas support received through the ILF has transformed thousands of lives, local authorities are not able to provide the same level or range of support through their current systems. With central funding to local authorities being cut this can only get worse.
Speakers at the vigil outside the court included Linda Burnip, co-founder of Disabled People Against Cuts, Tracey Lazard, Chief executive of Inclusion London and many disabled people who are personally affected by the closure of the Independent Living Fund.
Writer/performers and ILF users Sophie Partridge and Penny Pepper read from their new script developed to highlight the importance of the Fund.
A key aspect of the case is proving that the change is in effect a very big cut in benefits rather than a reform of the way it is administered, as the Department of Work and Pensions claims.
The DWP barrister took a disgraceful line of defence trying to say that the closure was not based on money but on desire for equity between non-ILF users and ILF users.
The court is likely to make a ruling in April.
Posted by london communists at 2:40 pm No comments:

Comrades and friends gathered last Sunday to salute the memory of Karl Marx at his tomb in Highgate Cemetery in London. Marx died in his study at half-past two on the afternoon of Wednesday 14th March 1883. To commemorate his passing the Marx Memorial Library has for many decades held an annual graveside oration at his burial place in Highgate Cemetery and this year the address was given by Hans Modrow, the last premier of the German Democratic Republic and currently honorary chair of the Left Party, a left social-democratic party that has considerable support in eastern Germany. Modrow said that today: “Marx is back again and his thoughts remain fresh. Even for the bourgeois media in Germany it is opportune to refer to Marx. The interest in him has grown immensely”.
Daphne Liddle laid flowers on behalf of the NCP at the tomb along with representatives from the embassies of the people’s republics in London and other communist and progressive movements at home and overseas.
Posted by london communists at 2:33 pm No comments:

Comrades and friends denounced the latest provocations of US imperialism at a solidarity meeting in central London last Saturday evening organised by the UK Korean Friendship Association (KFA). Dermot Hudson, the KFA’s official delegate in Britain, opened the discussion on the latest imperialist moves against Democratic Korea which include new United Nations economic sanctions against the DPR Korea and provocative war-games in the occupied south designed to rack up tension on the Korean peninsula. And NCP leader Andy Brooks spoke about the need to mobilise support for socialist Korea in Britain and condemn British involvement in the current US military exercises and deployment of the air power in south Korea.
But Democratic Korea is not defenceless and this was seen in the first of two short films from north Korea that were screened at the meeting. The skill and determination of the Korean People’s Army was displayed in Arms of Korea while the superiority of the socialist system was seen in Pyongyang – City of Free Education.
A solidarity message was endorsed and support for a picket outside the US embassy in London called for at the close of the meeting.
Posted by london communists at 2:29 pm No comments: