by New Worker correspondent
Vietnamese ambassador Nguyen Hoang Long welcomed politicians, diplomats, journalists and members of the Vietnamese community in London at a celebration of Vietnam’s National Day at Claridge’s Hotel on Monday.
NCP leader Andy Brooks and Rob Griffiths from the CPB joined the packed assembly in the ballroom of the Mayfair hotel for the first major diplomatic reception in the capital since the end of the lockdown. Sir Lindsay Hoyle, the Speaker of the House of Commons, Minister of State for Asia Amanda Milling and the Secretary of State for Defence Ben Wallace were also amongst the 500 or so guests at the commemoration of the Vietnamese declaration of independence from France on 2nd September 1945.
On that day Vietnamese communist leader Ho Chi Minh proclaimed the establishment of the Democratic Republic of Vietnam in Hanoi, and the beginning of the struggle for freedom that finally ended with the defeat of US imperialism in 1975 and the establishment of the Socialist Republic of Vietnam.
In his welcoming address, Nguyen Hoang Long underlined that the event also aimed to celebrate the friendship between Vietnam and its partners and all countries in the world.
Highlighting the achievements that Vietnam has made after 35 years of Doi Moi (Renewal), the Vietnamese envoy noted that from a war-torn country, Vietnam has become the fourth leading economy in ASEAN, the Association of Southeast Asian Nations, and the 37th in the world, as well as one of the most open economies with the signing of 14 new free trade agreements and new generation deals.
As a responsible member of the United Nations, Vietnam has been elected as a non-permanent member of the United Nations Security Council twice, and performed excellently the role of ASEAN Chair twice, including in 2020 amidst the challenging situation due to COVID‑19, he said.
The Vietnamese ambassador also spotlighted the growth of the Vietnam–UK strategic partnership over the years, including many high-level visits to each other. He underlined that Prime Minister Pham Minh Chinh’s participation in the 2021 United Nations Climate Change Conference (COP26) in Glasgow this November and Foreign Minister Bui Thanh Son’s attendance at the G7-ASEAN Foreign Ministers’ Meeting will contribute to strongly boosting the bilateral partnership in the future.
At the ceremony, the Vietnamese Embassy honoured several individuals and organisations in the UK for supporting Vietnam in COVID‑19 prevention and control activities. They have raised about $575,400 in cash and medical supplies for Vietnam.
The embassy also auctioned three paintings by Vietnamese young painters for £6,700 for the COVID‑19 fight at home.
Participants also had a chance to hear Vietnamese singer Nguyen Hong Nhung, see a photo collection featuring the tangible and intangible heritage of Vietnam, and enjoy Vietnamese cuisine.
Posted by london communists at 4:12 pm No comments: 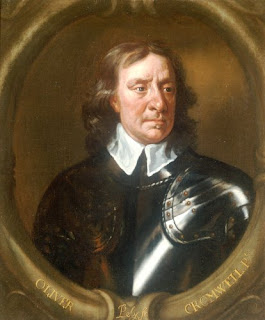 That 'tis the most which we deteremine can
If these the Times, then this must be the Man
Andrew Marvell
1621-1678

OLIVER CROMWELL, the leader of the bourgeois English Revolution, died on 3rd September 1658. Stricken by a malarial fever that proved to be fatal the Lord Protector willed himself to live until his auspicious day – the day his first parliament met in 1654. The day he smashed the Scottish Royalists at the battle of Dunbar in 1650 and forced the young Charles Stuart to run for his life the following year when the Royalists were routed at the battle of Worcester.
Cromwell led the parliamentary forces to victory in the civil war which began in 1642 and ended with the trial and execution of the king, Charles Stuart, in 1649. He presided over the establishment of the Republic of England, or Commonwealth as it was styled in English, and in 1653 he became head of state, or Lord Protector. Cromwell’s death was marked by genuine mourning throughout the country. His state funeral was the biggest London had ever seen. Two years later the Stuart royalty were back.
Today Cromwell’s death passes largely unnoticed but Oliver is not quite forgotten.
Marie Lloyd, the Victorian musical hall queen, sang about “the ruins that Cromwell knocked about a bit”. Elvis Costello wrote Oliver’s Army, a sardonic song about the modern British Army in 1979, and a radical punk rock band took the name of Cromwell’s New Model Army for their own. The name of Cromwell is preserved in the streets of London. Countless books, and articles have been written about his life as well as two feature films and a number of television documentaries and every year enthusiasts re-enact the major battles of the civil war.
The Quakers we meet on the peace demonstrations were founded by George Fox, whose pacifist beliefs were borne out of the violence of the revolution. Robert Owen, the founder of the Co-operative Movement, and William Morris, the Victorian socialist and artist, were both influenced by the writings of Gerrard Winstanley, the leader of the Diggers, the “True Levellers” whose attempt to establish co-operative farms in Surrey and other parts of the country were suppressed during the Commonwealth.
Irish nationalists call Cromwell a brutal English invader while many Protestants still see him as a religious reformer who fought for freedom of conscience for all faiths apart from Catholicism. And the Jewish community still remembers Cromwell as the leader who allowed Jews to live, worship and work in England for the first time since the pogroms of 1290.
But for the bourgeoisie Oliver is best forgotten, even though their ascendancy began when their ancestors took up the gun in the 1640s.
The ruling class abhor revolutionary change today because it threatens their own domination, so they naturally deny that their class ever came to power through it in the first place. For them the English republic is an aberration, a temporary blip in the steady advance of bourgeois progress, which is the myth they teach us in school. If they elevate anything at all it is the ‘glorious revolution’ of 1688, when the last of the Stuarts was deposed and replaced by a king of their own choosing. Though not as bloodless as they claimed – plenty was shed in Ireland – the establishment of a monarchy that was the gift of Parliament was achieved without the involvement of the masses, which was precisely what was intended.
For romantic socialists Cromwell represents the well-to-do Puritan merchants and landowners who dominated the Army Council – the Grandees who crushed the Levellers and the rest of the democratic movement in the army. But Marxists always recognised the historic role of Cromwell. In 1948 British communist leader Harry Pollitt said: “When the growing capitalist class, the poor farmers and craftsmen, led by Oliver Cromwell, shattered the system of feudalism, and executed King Charles I in the process, reigning monarchs and ruling nobilities everywhere saw the pattern of future history unfolding. The name of Cromwell was reviled, then, as much as Stalin’s is today, by the ruling powers of the old and doomed order of society.
“The English Revolution is ‘great’, because it broke the barriers to man’s advance. It allowed the capitalist class to open the road leading to modern large-scale industry. It permitted science to serve the needs of the new, capitalist society. And, because of these developments, it provided the basis on which, for the first time, a new class, the working class, began to grow, to organise and itself to challenge the prevailing system of society.
“Capitalism, at first progressive, in so far as it led the way for technical advance, developed to the point limited by its own structure. It became, as feudalism was before it, a barrier to the further advance of man. It ceased to serve a useful purpose. It had built up enormous productive forces, but was incapable of providing the majority of the people with a decent standard of life.
“Throughout the world, the working class, with the Communist Party at its head, now goes forward to put an end to capitalism and to build socialism. The English Revolution set this train of historic events in motion. That is why our Party is proud to honour its memory.”

Posted by london communists at 11:21 am No comments: