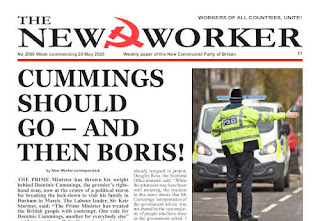 Aides by their very definition are expendable. They get their money and they’re paid off when they are no longer needed. If they become an embarrassment to their masters they are expected to go quietly in return for some sort of reward for keeping their mouths shut. But when they get too big for their boots, others may intervene to help them on their way.
Rasputin went down in a hail of bullets when he became an embarrassment to prominent members of the Russian aristocracy during the First World War. We’ve moved on from those days and, in any case, most minions have played the bourgeois game in Britain to abide by the unwritten code of conduct that governs the behaviour of the Establishment. Dominic Cummings, however, thinks he’s a different breed that can flout the norms of the ruling class he claims to serve.
The Johnson camp claim that there’s a hidden Remainer agenda behind the campaign to get rid of Cummings. This is largely based on the childish belief that you can kick prominent Tories, including two former Chancellors, eight former Cabinet ministers and the grandson of Winston Churchill, out of the Conservative Party with impunity.

This may well be pay-back time for the Tory grandees who were purged last September for opposing Brexit. But there are plenty more who hate him.
This is the man who spouts on about “Odyssean education” and “super-forecasters”, and allegedly claimed that "a child's performance has more to do with genetic makeup than the standard of his or her education”.
This is the man that the Sunday Times claimed had told a private meeting in February that the Government's plan for dealing with the coronavirus plague was “herd immunity, protect the economy and if that means some pensioners die, too bad”.
Johnson’s grief has clearly been brought on through Cummings’ own selfish actions. By breaking the lock-down rules he helped to devise he’s undermined the Government’s efforts to enforce the emergency regulations and made the Prime Minister look a fool. There cannot be one rule for Dominic Cummings and another for the British people.
Cummings is mocked in some sections of the Tory press. He’s jeered on the street where he lives and over 760,000 people have signed a petition calling for his dismissal. Labour and the other opposition parties are demanding the dismissal of the “chief adviser” to the Prime Minister. Some senior Tories and prominent members of the Church of England have also joined the chorus calling for Cummings to go. They can see that the Cummings affair has undermined public confidence in the lock-down regime as well as the credibility of the Tory Government.
“This is a fundamental test of character for Johnson,” John MacDonnell, the left Labour MP, said last week. “He’s dramatically failing it by defending the indefensible and doing it by obfuscation and avoidance. This is the sort of event from which the reputations of Prime Ministers do not recover.”
Once the story broke any other Prime Minister would have immediately told Cummings to fall on his sword to avoid embarrassing the Government. But Johnson is a weak man who likes to be surrounded by people lesser than himself.
Both men are rubbish. They should both go. The sooner the better.
Posted by london communists at 3:08 pm No comments:

Piers Corbyn, the elder brother of former Labour leader Jeremy Corbyn, was arrested at an anti-lockdown demonstration in Hyde Park in London last weekend. He had refused to leave the area or provide his personal details to the police who were enforcing the current emergency regulations that ban gatherings of more than two people and enforce social distancing during the COVID-19 crisis.
Piers Corbyn was led away in handcuffs after he used a megaphone to tell a small crowd that 5G and the pandemic were linked, and lockdown was a “pack of lies to brainwash you and keep you in order”. Although Piers left the Labour Party in 2002 during the run-up to the Anglo-American invasion of Iraq, he has remained active in London street politics. A well-known Brexiteer and professional weather-forecaster, Piers Corbyn has also espoused so-called ‘libertarian’ causes such as climate-change denial and now, anti-lockdown protests.
He recently claimed that the Johnson government was using the lockdown to build a “new world order” that will see people injected with microchips for tracking.
Some 40 protesters gathered at Speaker's Corner in Hyde Park to protest at the continuing lock-down called by the shadowy “UK Freedom Movement” for nation-wide “mass gatherings” against “mandatory vaccines” and the “unlawful lock-down” on Saturday. But few heeded the call of the social-media campaign that is clearly inspired by far-right militia movements which are making similar demands in the USA. Only six turned up in Southampton and the protest in Cardiff was attended by just two people – who had come from Bristol for the occasion.
Posted by london communists at 4:09 pm No comments:

Life under Lockdown is tough for all, but one sadly neglected minority group’s sufferings have gone largely unnoticed. Get your hankies out as you prepare to shed a tear over the unspeakable hardships that are presently being suffered by outrageously rich people. It is extremely difficult to look after your 14-bedroom mansion when your servants cannot come in to work. The obvious lesson is that you need live-in servants rather than having people coming in every day.
It was truly heart-breaking to read in a recent issue of the Times about the woman who took a Brillo pad to her expensive enamel bath in the absence of her maid, or the person who took one of their chandeliers apart to clean it and could not get it back together. Others have had trouble finding where the vacuum cleaner is kept.
Some vain people are reported to be having manicures through their letterbox and others have ended up in hospital from foolishly injecting themselves with fillers to keep wrinkles at bay. Money obviously cannot buy elementary intelligence.
Fortunately help is at hand. Recruitment agency Polo &Tweed have ridden to the rescue.  They normally supply and train butlers, maids and nannies for the idle rich, but now their website is full of useful advice such as: “You really should be cleaning your fridge regularly” and after washing your fridge shelves: “Make sure everything is thoroughly dried before you put them back into the fridge.” It also advises: “Get into the habit of every time you enter the house from outside, to leave your shoes at the door. By not taking your shoes off, you would bring in all mud, sand or dirt from outside into the house which will only result in more cleaning, vacuum cleaning and mopping tasks for you.” Not the sort of thing you would notice with a team of servants.
In the absence of an active market for lackeys, Polo & Tweed are helpfully offering online courses that impart these gems of wisdom about domestic science that will be received with the same sense of wonderment as if it were Stephen Hawking discoursing about quantum physics.
Posted by london communists at 3:56 pm No comments: