UAF conference: Standing up to fascism and racism 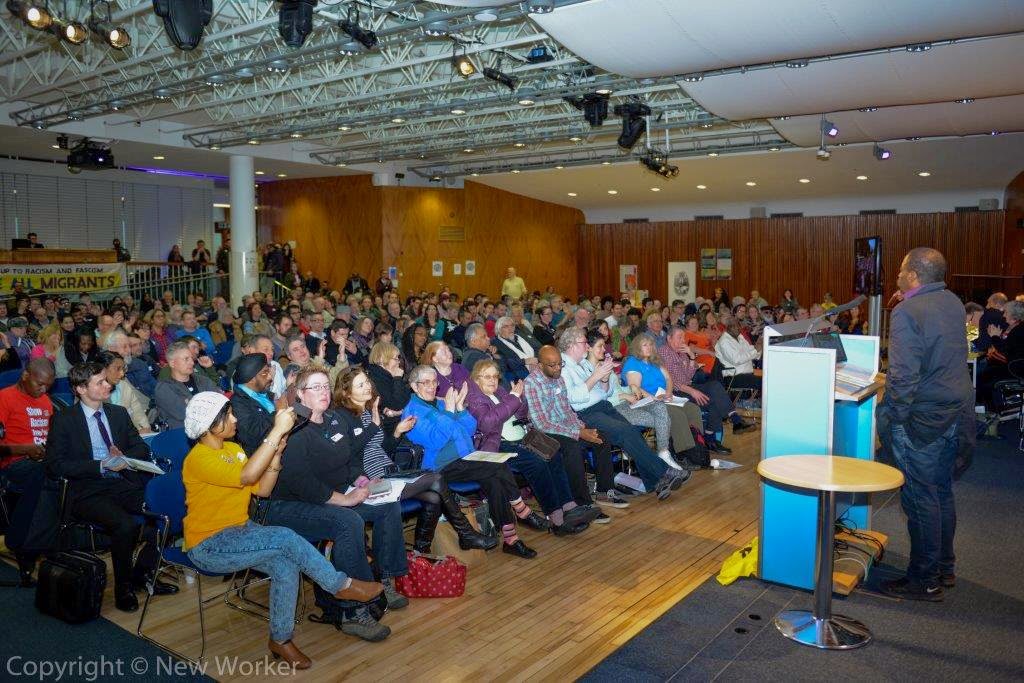 HUNDREDS of anti-fascist and anti-racist activists packed the TUC’s main conference room at its headquarters in London last Saturday for the annual conference of Unite Against Fascism.
The conference had so many urgent topics to debate that it divided from the outset into four different discussion groups covering:

Attendance was so high that all these sessions were packed and about 30 people left over who could not squeeze into any of them.
The first plenary session, focussing on uniting against Islamophobia, anti-Semitism and fascism in Europe, required three extra rows of seating put out and still people were standing.
Speakers included Christine Buchholz, Owen Jones, writer Victoria Brittain, Ken Livingstone and CWU general secretary Billy Hayes.
Marwan Muhammed, speaking for Organisation for Security and Co-operation in Europe (OSCE), called for anti-fascism to be focussed more on the needs of its victims. He warned that many victims do not report attacks because they have no confidence that anything will happen and that little or no effort will be made to bring the attackers to justice.
He warned that the effect of racism on its victims is to totally destroy their self-image as human beings.
After lunch there were four more big discussion groups: Black lives matter; Keep racism out of the general election; Stand up to Ukip and [Je ne suis pas Charlie] – incitement of hatred and Islamophobia is not freedom of speech.
Speakers included relatives of black people who died in custody Janet Alder and Marcia Rigg, Zita Holbourne, Diane Abbott MP, Steve Hart from the union Unite, Emily Thornberry MP, Claude Moraes MEP, footballer Francis Duku and Lee Jasper.
It was an event that brought together the whole spectrum of left politics and touched on many other issues: austerity, civil rights, peace and so on.
One topic missing from the main discussion arenas was the new fascist government in Ukraine that includes hard core Nazis and the regime of terror there.
But a stall run by the New Communist Party did its best to make up for this deficit with copies of the New Worker, leaflets and many discussions.
A small handful of fascists made an attempt to disrupt the conference but were kept well at bay by police and conference stewards. After the event s group of anti-fascists leaving were set upon by fascists. But the anti-fascists were ready and soon had the fascists running from them.
Posted by london communists at 8:25 pm No comments:

No US arms for Ukrainian fascists! 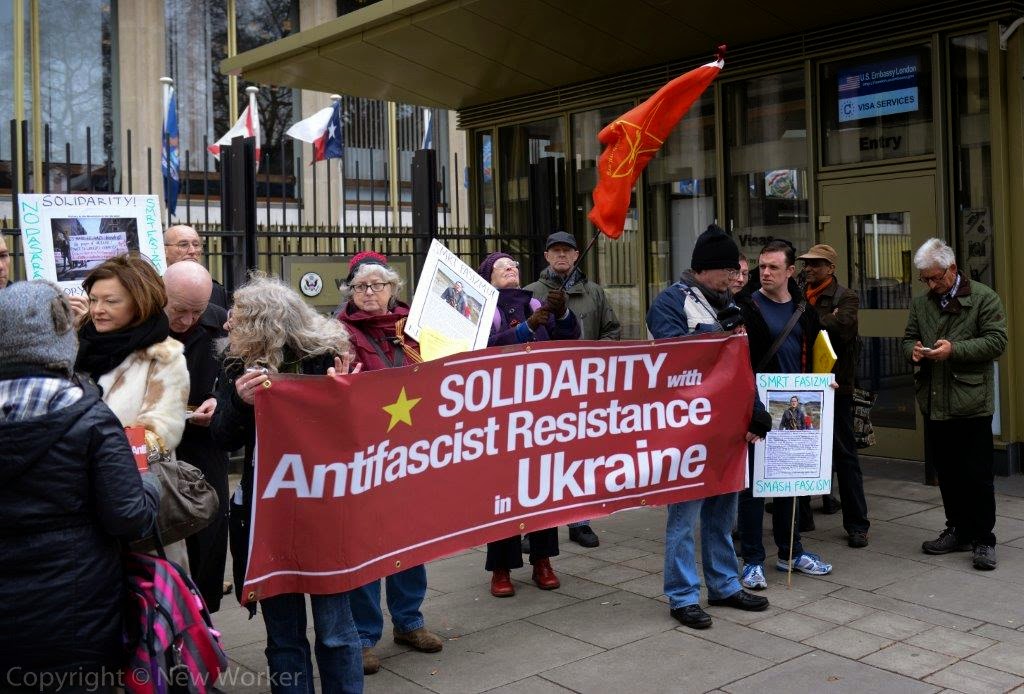 ABOUT 50 people gathered outside the US embassy in London on Sunday to protest against the threat by the United States to send weapons to Ukraine and for peace for the Donbas.
The protest was organised by the Solidarity with Antifascist Resistance in Ukraine and backed by Stop the War Coalition. There were a number of speakers, including Daphne Liddle from the New Communist Party, who denounced the long-standing support the US has given to Ukrainian Nazism, including support for Ukranian SS veterans in Britain from this very embassy and expressed opposition to the sending of arms by Washington which would end up in the hands of the fascist volunteer “Naziguard” battalions.
Posted by london communists at 12:28 pm No comments:


By New Worker correspondent
Over 200 special guests celebrated the 56th year of the Cuban Revolution and the freedom of the Miami Five at a packed Bolivar Hall in London last week. NCP leader Andy Brooks and Daphne Liddle from the Central Committee joined trade unionists, campaigners, actors and artists at the event called by the Cuban embassy and the Cuba Solidarity Campaign (CSC), which had campaigned for 16 years for the release of the five anti-terrorist heroes who returned home to Cuba on 17th December 2014.
CSC Director Rob Miller paid tribute to the five brave men and their families and TUC general secretary Frances O’Grady spoke about the labour movement’s efforts to win the Cuban prisoners’ freedom. Cuban Ambassador Teresita Vicente thanked the British trade union movement for its tireless campaigning on the Five: “This is not the end, this is the beginning. And I promise you, like Raul and Fidel Castro have both promised – Guantanamo will be back.” To huge applause she said: “Together, we will defeat the blockade” and “Cuba will be socialist forever.”
Rene Gonzalez, one of the Five, was denied a visa to attend the meeting. But his voice was heard when former Unite general secretary Tony Woodley took to the stage with his mobile phone to link up to Rene in Havana.
Rene Gonzalez has been denied a British visa on two occasions, even though he has been able to visit other European countries, including Spain, Portugal and France. Speakers stressed that this cruel visa ban will be challenged at every level until Rene and the rest of the Miami Five are able to join us here in what will be a major celebration of the victory achieved in this long and hard-fought campaign for justice.

Posted by london communists at 12:00 am No comments:

IN DEMOCRATIC Korea Kim Jong Il’s birthday has long been known as the Day of the Shining Star and throughout the world overseas Koreans, progressives and communists held their own events in honour of Kim Jong Il, who was born on 16th February 1942 and died at his post on 17th December 2011. In London a number of events were held over the past two weeks to commemorate the life and times of Kim Jong Il, culminating at a reception at the DPRK embassy last week.
New Communist Party leader Andy Brooks joined others in laying floral tributes in front of the portraits of the great leaders Kim Il Sung and Kim Jong Il at the opening of the reception, which brought together communists, diplomats and many of those actively involved in solidarity with Democratic Korea in London and across the country.
Kim Jong Il’s entire life was devoted to serving the Korean people. Following Kim Il Sung’s footsteps, Kim Jong Il led the Workers Party of Korea into the 21st century to build a strong and prosperous socialist republic. Kim Jong Il was a leading Marxist thinker who made an important contribution to the modern communist theory as well as an astute statesman who led the Korean people through thick and thin to overcome natural disasters, imperialist blockade and diplomatic isolation.
While ensuring the DPRK’s defence against the threats and provocations of US imperialism and its lackeys, Kim Jong Il worked tirelessly to ease tension on the Korean peninsula to pave the way towards the peaceful reunification of Korea.
Now the Korean people are racing ahead at a new fast speed of socialist construction, upholding the slogan put forward by the young leader, Kim Jong Un:  "Let us raise a fierce wind of making a fresh leap forward on all fronts of building a thriving country filled with confidence in victory!"
Posted by london communists at 11:50 pm No comments:


THERE was solid support across London for a 24 hour strike last Thursday 5th February as up to 20,000 bus workers across the capital’s 18 bus operators walked out for a second time to end pay inequality and secure one collective agreement for pay and conditions.
With picket lines in place outside London’s 70 bus garages, the bus workers’ union Unite accused Transport for London (TfL) of being “wildly optimistic” with its claims of the number of buses on the road.
Urging the buses operators to step out from behind the “coat tails” of TfL, Unite warned of more action if London’s bus companies continued with their refusal to talk collectively.
Unite claims a refusal by the operators to address pay inequality has led to pay gaps of over £3-an-hour for new starters opening up, with pay varying from £9.30 to £12.34 an hour depending on the company.
Commenting on Thursday’s disruption, Unite regional officer Wayne King said: “TfL is being wildly optimistic with its claims of the number of buses running today. Once again we’ve seen solid support by bus workers determined to end the pay chaos on London’s buses.
“Today’s disruption is regrettable, but the blame lies squarely with London’s 18 bus companies who have continued to refuse to talk collectively over the last two years.
“To suggest such talks would be illegal is misleading. Are they saying that collective arrangements covering the construction industry or the police are illegal?
“All we are asking for is a collective forum to discuss how we can end pay disparities over a sensible timeframe.
“The bus companies need to stop hiding behind the coat tails of TfL and start talking collectively about how we end pay inequality and achieve a fair deal for the men and women who keep London on the move seven days a week, 24 hours a day.”
The bus drivers had support from other unions, including the civil service union PCS.
PCS general secretary Mark Serwotka sent a message of support to the 20,000 striking Unite bus workers.
There will be further strikes on 13th and 16th unless the bus operators enter into collective talks over ending unfair pay disparities.
Responding to statements by TfL, Unite warned the transport body was “failing” passengers with misleading comments that exposed the pretence that it was neutral in the dispute.
“Passengers should also be clear that this isn’t a political dispute, it’s an industrial one. TfL with its continuing meddling seem to want to take this away from being a straightforward industrial dispute between bus drivers and their employers and turn it into a political football," said Wayne King.
“TfL should either take a constructive role or keep out of it and let the operators speak for themselves.”
Posted by london communists at 10:02 pm No comments: