THOUSANDS took to the streets of London on Saturday 20th June to protest against  more austerity. Around 250,000 people marched through central London to demonstrate against the renewed ruling class offensive of the Cameron government.
Every major trade union was well represented along with many of the minor ones, community groups and peace movemtns like Stop the War and CND, anti-fascist campaigns like UAF, freedom and justice campaigns, NHS and housing campaigns, religious and pensioner groups, phalanxes of people in wheelchairs and thousands and thousands of noisy and colourful students – all together and all with one message: “No more cuts!”
The march from the Bank of England to Parliament Square was tiring for many but they packed the square to listen to speeches from Green Party leader Caroline Lucas, singer Charlotte Church, Diane Abbott MP and of course Jeremy Corbyn MP, who is standing for the Labour leadership.
He spoke of the ruin that the banking crisis had caused and the increasing inequality with a million depending on food banks and people sleeping in the streets.
He also spoke of the 1850s rallies in the same spot for the People’s Charter, whose demands were described as “out of date and irrelevant” at the time but were all achieved within a century. “They were the real visionaries,” he said. “We are standing on the shoulders of giants.”
“We want a state that takes responsibility for everybody… where we each care for all and no one is destitute. I think it’s called socialism,” he added.

Posted by london communists at 1:35 pm No comments:


STREET activists in Walworth, south London last Sunday, 21st June, engaged in a fight with police and officers of the UK Borders Agency to try to stop a shop worker suspected of being an illegal immigrant being seized and taken into detention.
They call themselves the Anti Raids Network and took action when the UKBA officers and police arrived to make random raids in the area. The police had already seized one man working in a local shop and put him in a van.
People blockaded the van, which was parked on a small side street, climbing onto it, putting wheelie bins and their bikes in front of it and letting the air in the tires down and pelting it with fruit and eggs from the market up the road.
Police reinforcements including a dog unit and three vans full of Territorial Support Group (TSG) “riot cops” in full body armour were called in with dogs.
The cops and dogs were pretty intimidating, but people weren't afraid to shout at them and do a bit of jostling. Still, the cops managed to push people away from in front of the UKBA bus, clearing a path.
Once the UKBA van had got away, the anger of the crowd was palpable and it turned on the police; traffic cones, glass bottles and even bricks were hurled at them
Sensing the mood, the police tried to make a quick exit, but people blocked their vans. They moved on foot for about 500 metres, getting more traffic cones and bottles hurled at them and wheelie bins pushed at them.
One police officer was hit in the neck by a flying traffic cone and had to be helped into a police van by his colleagues. Eventually the police got into a wide enough street and could drive off.
The police arrested a man who got in their way, "on suspicion of violent disorder, assault on police, criminal damage and animal cruelty". There was a protest outside Walworth police station through the night calling for his release.
The crowd grew throughout the protest as people came from surrounding streets to see what was going on. By the end there were probably to at least a hundred taking the opportunity to join in with abusing the police.
One activist told a reporter that they had witnessed another UKBA raid in Walworth on Friday. "They're targeting Walworth. But seeing this reaction today, they're not going to try it again. The police and UKBA had a really tough time.”
Once the police had left, everyone went round tidying up the road moving wheelie bins back, moving traffic cones and plastic barriers. Then everyone had a bit of a dance.
Posted by london communists at 1:25 pm No comments:

London parks could be sold?


COUNCILLOR Julian Bell of Ealing Council last week warned that London's parks 'could become inaccessible to the public because cash-strapped council may be forced to sell them to private companies because they are too expensive to maintain.
His comments come as the organisation warns boroughs' spending on parks has fallen by 18 per cent in the past four years. The Government said councils should work with communities to ensure access.
Although the royal parks would be protected from any privatisation, the capital is around 40 per cent green space, according to the City of London.
London Councils, which represents 32 boroughs and the City of London, said budget cuts had put local services, such as social care, under pressure. It warned funding for community groups and volunteers who maintain the parks is under threat, as they prioritise other services, such as looking after homeless people. If the cuts continue, councils may be unable to stop the parks being sold off and run privately by 2025, it warned.
Councillor Julian Bell, chair of London Councils' Transport and Environment Committee, said: "We have got to do everything we can to protect our parks for our future generation."
He speculated that one scenario could see health clubs buy the spaces up as they are considered "fantastic assets", in which case the public could have no access, as they could be reserved solely for members.
Posted by london communists at 1:22 pm No comments: 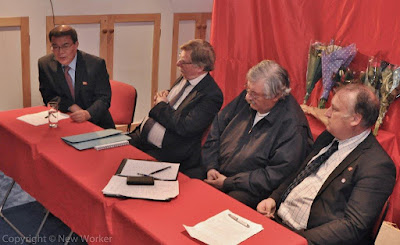 LAST WEEK the Korean people marked the 51st anniversary of the start of work by Kim Jong Il at the Central Committee of the Workers’ Party of Korea, at meetings and ceremonies across the Democratic People’s Republic of Korea. They were joined by communists and Korean friendship activists at solidarity events throughout the world and on Friday June 19th  many of them paid tribute to the Korean communist leader at the John Buckle Centre in south London.
The commencement of Kim Jong Il’s work at the Central Committee of the WPK, on 19th June 1964, has significance in marking the period of the consolidation of the WPK as a truly leading Party whose authority is recognised by the Korean people and is fully at one with their interests and aspirations.
Andy Brooks of the Friends of Korea committee, which organised the meeting, chaired the panel that included Michael Chant of the RCPB (ML), Dermot Hudson of the Korean Friendship Association, John McLeod of the SLP and DPRK Ambassador Hyong Hak Bong.
The speakers summarised how the revolutionary direction of the Korean people, their successes and their construction of a human-centred society were inseparably linked to Juché, the kernel of Korean-style socialism. During the lively discussion that followed many took advantage of the golden opportunity to ask the DPRK ambassador about the current situation and the prospects for peace on the Korean peninsula.
This was followed by informal discussions over drinks and the screening of the latest news review from DPRK TV.
The Friends of Korea committee brings together all the major movements active in Korean friendship and solidarity work in Britain today. The committee includes the New Communist Party, Revolutionary Communist Party of Britain (ML), Socialist Labour Party, Juché Idea Study Group and the UK Korean Friendship Association.  It is chaired by Andy Brooks and the secretary is Michael Chant. The committee organises meetings throughout the year, which are publicised by the supporting movements and on the Friends of Korea blog.
Posted by london communists at 1:19 pm No comments:

NEW COMMUNIST Party leader Andy Brooks welcomed comrades and friends to the Party Centre on Thursday 18th June for the fourth in a series of seminars, called by the NCP and the Juché Idea Study Group, on the Juché and Songun politics that are the basis of Korean-style socialism.
Following the counter-revolutions in the Soviet Union and eastern Europe mass communist parties and whole sections of the world-wide movement wavered in the early 1990s. But the Workers Party of Korea remained steadfast. 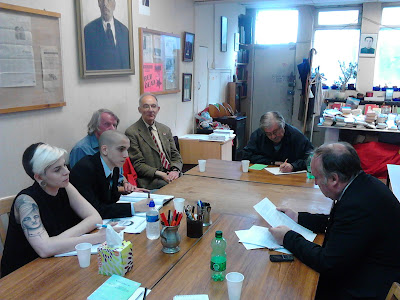 Great leader Kim Il Sung rallied the communist movement and progressive forces at a conference that adopted the Pyongyang Declaration, Let Us Defend and Advance the Cause of Socialism, that was signed by a number of parties, including the NCP, on  20th April 1992.
And dear leader Kim Jong Il made powerful contributions to the development of the Juché idea that looked at the root causes of the revisionism that paved the way to the outright treachery that led to the downfall of the Soviet Union. One of them was Giving Priority to Ideological Work is Essential for accomplishing Socialism – a keynote paper first published in 1995 – which was the theme of the openings by Dermot Hudson of the Juché Idea Study Group of England  and David Munoz, a Spanish member of the Korean Friendship Association working in London.
Everyone took part in the round-table discussion that followed which also marked the 51st anniversary of the start of work of the comrade Kim Jong Il at the Central Committee of the Workers' Party of Korea.
Posted by london communists at 1:14 pm No comments: